Adrenalin Misfits is a Kinect game first off made by Konami and retails for just $49.99.  The game is a snowboarding game, but you wont just be boarding on snow, you’ll be on desert land, water and more.  Don’t ask how because it’s a video game and a fun one at that.  You start off the game having to complete tutorials to get you used to how to play.  No cool boards or characters are available from the start until you unlock them by playing, but you can choose to be your avatar which is pretty awesome. 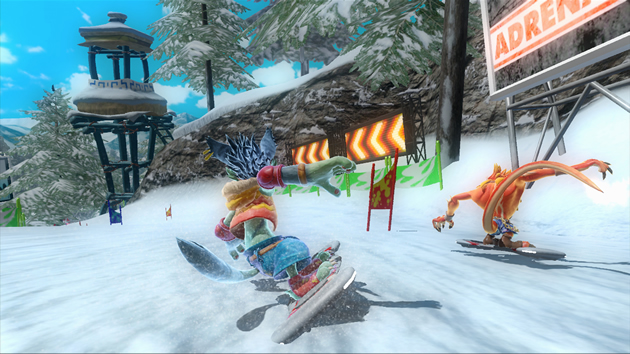 Boarding in the Snow

Once you complete the tutorials there are a whole bunch of different game modes you can choose to play from.  Free Race, Downhill Slalom which requires you to race as well as crossing in between flags through out the track, there is also a mode which requires you to race through a track popping as many balloons as you can(just by running in to them) called Balloon Buster.  Fly Distance is where you need to stay in the air for as long as possible and sticking your arms out in a ‘T’ position even helps as well as netting you an Achievement.  Trick Score is a mode where, yes you guessed it you have to do as many tricks as possible with in the time limit, the cooler the better, the better the more points you get.  Doing well in all these things helps you unlock new boards and characters.  There is also another mode where you can do tricks by either using a half pipe a short downhill track that has one jump and basically a skate park for your board which is a lot of fun.

You might want to clear everything away from yourself while playing this game because if you don’t, it will get destroyed and you will sweat your ass off.  The tricks are one of the best parts of the game because not only do they give you and extra boost but they are easy as well as fun to do.  If you want to do a 360,  your natural instinct would tell you to literally do that but it’s not that complex, you just swing your front foot right or left.  Besides I don’t think everyone cant do back flips, which in the game just requires you to lift your front leg up quickly and lean back.  You can even grab your board while in the air and jump at will any time with out any ramp or anything.  I think I did 13 consecutive back flips in the air after jumping off this waterfall which was very satisfying.  There are also Mario Kart Power-Ups you can get do nail your opponent with which proves to be quite hard at times being that most of them require the opponent to be nearby, but that just requires a stomp of your front foot. 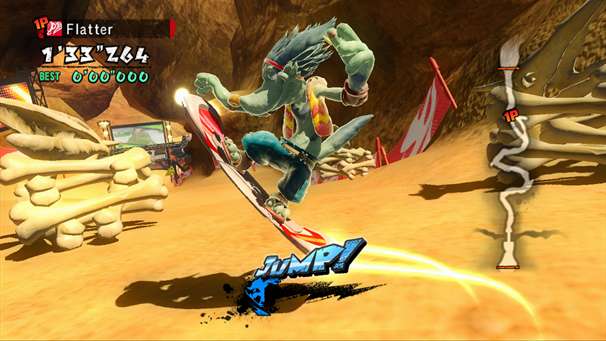 Jump in the sand.

As you progress through the game you will unlock characters, levels, tracks and boards.  Boards are the most important as there are different classes of boards just like cars in a racing game.  You have you basic and the advanced ones, as well as a rare board class along with a few other classes that requiring unlocking.   Each board has its own attributes, with a unique speed, jump, power, air, technique.  Rare boards are what you want to get to to crush everyone else and the best way to unlock these boards is by playing co-op. 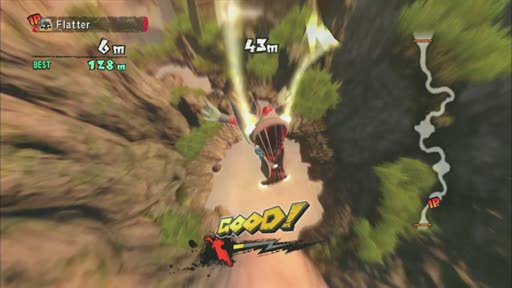 The co-op is only local unfortunately but it is a lot of fun.  You can help your buddy out by trying to take out the AI or try nailing your friend with a power to ensure your win.  There is even an achievement for coming in 1st and 2nd with your co-op partner.  Speaking of achievements, all of them are nice and easy to get with only 28 of them as well as making them all fun ones.  If only more games took a note from this instead of  “Beat the game without  dying” to get an achievement.  Screw .. That, I like my achievements to be fun and only semi challenging, not nearly impossible.  While the local co-op is fun it would be a lot more fun to have online co-op as well.  The one thing I have mention about the game is that as times it is not responsive to what you are doing, crashing into walls, going to wrong direction.  I don’t understand how I can be flying through a track exactly how I want to one minute and then the game becomes unresponsive with out me leaving my Kinect area or doing anything wrong.  If you can get best the occasional unresponsive controls that occur, Adrenalin Misfits is definitely one of the most fun games I have played for Kinect.

Fun easy tricks and stunts. Co-op is fun as well. In depth board attributes.

Unresponsive controls at random times. Could have made more use of power-ups.

Final Verdict:
GOOD
Adrenalin Misfits is a fun boarding game that takes you not just on the snow but to the desert and elsewhere. It's full of awesome tricks and stunts as well as plenty of different modes.
A copy of this game was provided by Developer/Publisher/Distributor/PR Agency for review purposes. Click here to know more about our Reviews Policy.