We got an opportunity to have a chat with Mikael Bourget, Public Relations Manager at QubicGames to talk about their latest release, AiRace Speed. Check out the entire interview and chip in with your thoughts in the comments section below.

Ravi Sinha: How did the concept for AiRace Speed come about? Did games like Wipeout serve as an inspiration for the fast-paced gameplay?

Mikael Bourget: The idea of AiRace Speed came to life thanks to the success of the DSiWare games AiRace and AiRace: Tunnel.

The latter has however much more influenced AiRace Speed and brought the concept of high-speed racing through tunnels with a sci-fi environment. So the question would rather be: what inspired the creation of AiRace: Tunnel, more than 3 years ago? It is important to say that AiRace: Tunnel was originally created as a bonus mode to AiRace. We wanted to give a solo challenge with a good sense of speed. That’s how the ideas of tunnels came to life. But in the last moment we decided to divide the games into two separate products.

And the result is that AiRace: Tunnel found a big success on its own. It provided players with a fun and interesting gameplay experience. That’s why we have decided to bring to the 3DS a new AiRace game following the concept of high-speed racing through tunnels with a sci-fi environment. And AiRace Speed was born.

To make the game we obviously also looked at what was made in the racing field in general. And indeed Wipeout is a classic and we took the sense of speed from it.Other wise I couldn’t really say that one game in particular served as inspiration. We’ve made research.

First we decided on the base mechanics, such as planes, race or speed. And then I think that the persons in the company who have the biggest impact on developing the root ideas are our designers. They are the best to come up with interesting concepts which have their own unique style. 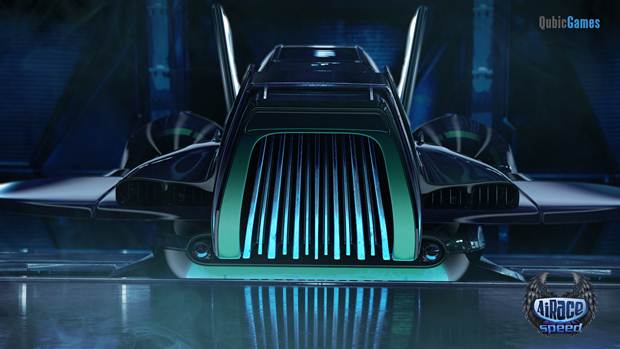 "It’s funny how most our games are actually challenging. For example AiRace, AiRace: Tunnel and 2 Fast 4 Gnomz give this same felling. I’m not sure if that’s really an objective from the beginning. I think that we naturally tend to think that the challenge is a positive game feature."

Ravi Sinha: The game has 18 tracks broken into groups of three, each group having its own vehicle. What was the reason you chose to stick with only a handful of vehicles as opposed to a wide selection?

Mikael Bourget: We’ve focused on creating various, interesting and very tricky tracks. This is where most of our efforts went to. Now the game has 5 jets and each of them are playable in several levels. We figured that this amount was good to have enough time to enjoy them in a couple of tracks and to have also diversity and new discoveries. Also 5 was a good number to guarantee very unique designs for each jet. None of them look alike.

Ravi Sinha: AiRace Speed seems like a throwback to games that were harder, and which would require time, patience and a sort of transcendent concentration to master. Did you have plans of capturing that old-school feeling?

Mikael Bourget: It’s funny how most our games are actually challenging. For example AiRace, AiRace: Tunnel and 2 Fast 4 Gnomz give this same felling. I’m not sure if that’s really an objective from the beginning. I think that we naturally tend to think that the challenge is a positive game feature.

At QubicGames, even if some of us are young, we’ve all played old-school arcade games focused on scorerecords and I think that we really enjoy them generally. As gamers we give more credits to a game when it is challenging us. The feeling of accomplishment after completing what you fought for is just awesome.

AiRace Speed had to provide the challenge, it’s a race against the clock, it tests your skills and reflexes. The gameplay experience is partly based on this “one more try” feeling. Thanks to the challenge, the more you play the better you are and the more you think you could achieve better scores.

As Pierre Corneille wrote, “Triumph without peril brings no glory”! 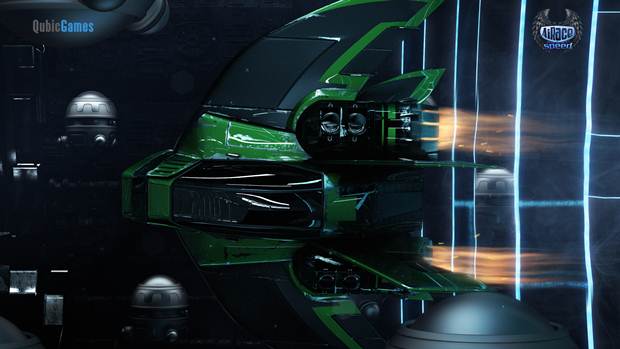 "A good 3D effect must be in the same time strong and clear. It must be impressive but not disturbing. It isn’t an easy thing to implement. And for each game it needs to be thought in a relevant way. "

Ravi Sinha: For a Nintendo 3DS eShop title, AiRace looks pretty damn sharp, especially in the sense of speed it manages to convey. How did you go about instilling such a sensation into something that isn’t a full retail release?

For us it is crucial that AiRace Speed provides the players with a stunning visual experience. Becausethe game must deliver adrenaline and set the best conditions to enjoy flying jets with tight controls. Combined with these high-quality graphics, the 3D effects of AiRace Speed are also keys to instill the sensation of speed. They put the players in the middle of the action

A good 3D effect must be in the same time strong and clear. It must be impressive but not disturbing. It isn’t an easy thing to implement. And for each game it needs to be thought in a relevant way. We’ve already used the 3D effect for our game 2 Fast 4 Gnomz. But using it for AiRace Speed is a completely new challenge.  It is necessary to have an extremely clear display of the environment when flying at very high speeds inside tunnels. The player should be able to entirely focus on his attempt of flying as fast as possible.

To reach that, one of the difficult things was to properly balance the contrasts and the colors in the levels.

If you wish to know more about the development of the game, we invite you to read the “Behind the Scenes” articles posted on the AiRace Speed website.

Ravi Sinha: What are your thoughts on the current selection of handheld titles for the Nintendo 3DS versus the PlayStation Vita? Would it feel beneficial to have AiRace release for the Vita at some point as well?

Mikael Bourget: The Nintendo 3DSand the PlayStation Vita don’toffer a lot of racing games to play on their system. Generally the selection is not very different from one console to another. The significant difference is that another futuristic racing game exists on PS Vita, and that’s Wipeout. But the gameplay of AiRace Speed is not so similar to Wipeout because in AiRace Speed you can fly in all directions without gravity limitations.

We believe that indeed it would be beneficial to have AiRace Speed on PS Vita. 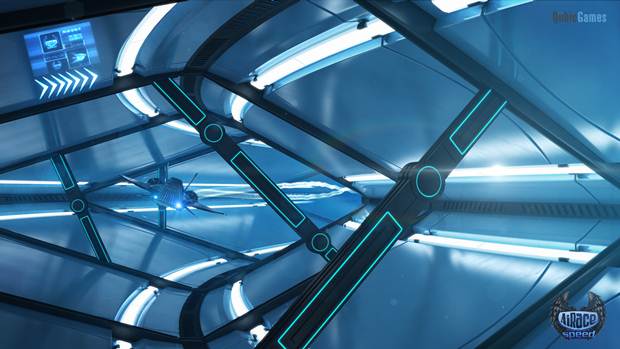 Ravi Sinha: What are your thoughts on the next generation of consoles such as the Xbox One and PlayStation 4? Will you be working on a next-generation project as such, or is something else in the pipeline for handhelds?

Now it’s hard to talk about the next generation because we still need to really witness what will happen. Now there is a lot of talking but it’s too early to give opinions. We are of course very impatient to discover these systems and we believe that the policy towards indie developers will be beneficial for both sides. We don’t know yet if we will work on them but it is in the realm of the possible, as well as a new game on handhelds is.

Ravi Sinha: Which feature of next-gen consoles interests you the most? Is the PlayStation 4’s 8 GB GDDR5 RAM, the Xbox One’s Kinect capabilities, or is the Cloud computing functionality that both consoles will have?

Mikael Bourget: We can answer this question from two points of views: gamers or developers.

As gamers I think that we’re interested in everything! However it might be true that more of us would rather get a PS4 than a Xbox One but I don’t think that it’s because of the bigger amount of RAM. That would rather be because of the difference in the games line-up. But like I said, these consoles aren’t even out yet and they have a big future ahead. We experienced that with the PS3 and the Xbox360: they lived long and many details evolved over the years.

As indie developers, we enjoy publishing games digitally. It costs less and is easier to manage. The better the cloud functionalities are, the better digital titles and content can become. So we are more than happy to see these next generation consoles feature more advanced Cloud computing possibilities.

Ravi Sinha: What are your thoughts on Nintendo’s game policy as opposed to Microsoft and Sony currently?

Mikael Bourget: Regarding the policy of digital game-selling platforms, I think that they are all proposing interesting solutions. They have made things in a different way and at different times and a lot of details are still evolving. Nintendo has already released the Wii U which has a positive eShop. Microsoft and Sony will soon show new things too.

The big difference between Nintendo and the 2 others is that Nintendo develop a lot of very popular games. And obviously they are highly promoted on their own consoles, more than games developed and published by third-party companies.

This aspect has an impact on the user’s use ofthe digital game-sellingsystems. 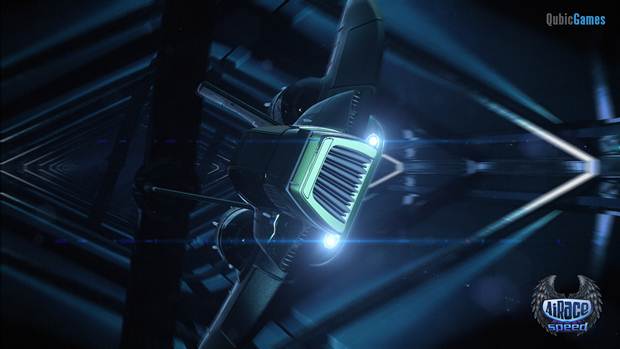 "The Wii U is a fantastic console and we are confident that sales will increase along with the number of available games, made by big and small developers. "

Ravi Sinha: Will we see AiRace Speed return in some form for a sequel, or maybe as a port to home consoles at some point?

Mikael Bourget: We want to make new AiRace games and/or get games fromthe series on other platforms, including eventually Nintendo Wii U. Let’s see what we’ll decide, today it’s too early to set projects in stone.

The Wii U is a fantastic console and we are confident that sales will increase along with the number of available games, made by big and small developers. We are already authorized developers for it. We have the devkits and we currently prepare our own game engine C-Way to feature the proper technology to handle development on Wii U.We do h ope that we could release a game on Nintendo Wii U in the next 12 months.

Generally, creating a game with an open air racing style with direct competitors in a multiplayer mode (more like AiRace on DSi) is a serious option for us. But we first want to see how the reception of AiRace Speed is. We need to have players’ feedback before making new moves related to the series.

Otherwise we have several projects on the way, and not only on the racing field or on Nintendo platforms. What I can say for sure is that you’ll hear about us soon!

Ravi Sinha:  Is there anything else you want to tell our readers about AiRace Speed?

Mikael Bourget: We hope that many of you will join the big battle already happening for the leaderboards podiums! We take part in this fierce competition and want to defy all of you! When you will see our name you will know that it’s us.CanyouflybetterthanQubicGames?