AMD has announced the launch of three new graphics cards that are all part of the OEM line and will be placed inside OEM PCs such as those built by Hewlett-Packard, Lenovo and others. The Radeon R9 380, Radeon R9 370 and Radeon R9 360 cards are all part of the R300 OEM family and each card have been targeted for one of the Tonga, Pitcairn or Bonaire Pro core architectures

The announcement of these particular graphics cards comes amid a number of other hardware releases including a detailing of their plans for their next generation GPUs. The AMD Radeon R9 380 is based on the Tonga Pro core architecture. This card comes equipped with features such as  4 GB of GDDR5 memory running across a 256-bit interface and is clocked at 918 MHz core and 5.5 GHz memory frequencies.

The AMD Radeon R9 370 is based on Pitcairn and the biggest difference between this and the 380 is that it the 37o is it is clocked at a 975 MHz core and 5.6 GHz memory frequencies. This card also doesn’t have support for Freesync technology while the 380 does. Both of these do come with  DirectX 12 support.

Finally, the AMD Radeon R9 360 is based on the Bonaire Pro core architecture. It has  2 GB of GDDR5 memory and has been clocked at 1050 MHz core and 6.5 GHz memory frequencies. This card comes with both Freesync and DirectX 12 support. Check out more detailed specs in the included pictures and start deciding which cards you think might work best for you. 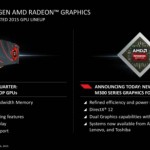 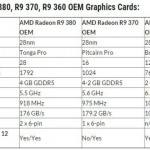