2010’s Amnesia: The Dark Descent cast a long shadow over the entire horror game genre. It was a very unique kind of horror game, a game that emphasized psychological terror over jump scares, a game that took away the player’s ability to engage in combat with the monsters haunting them – thus making you utterly powerless, and your fear that much more real. You weren’t going to be able to escape by pulling out a gun in Amnesia.

Today, a lot of this sounds rote and commonplace, and first person horror games emphasizing psychological scares over visceral action are extremely commonplace. Amnesia would go on to leave its mark even on major franchises like Resident Evil, which went first person and more towards psychological horror with RE7, and Silent Hill, with the aborted Silent Hills project still nonetheless giving us a taste of what an Amnesia-style Silent Hill game would have turned out like in PT.

The prevalence of this style of horror means that a lot of the novelty and uniqueness of the original Amnesia game is now gone, and players are more immune to what that kind of a game brings to the table by default. It does help, then, that developers Frictional Games decided to add such a delicious twist to every component of the original game that made it such a terrifying delight for players – in the process, creating a game that feels ambitious and bold, while still distinctly feeling like a follow up to The Dark Descent.

"Developers Frictional Games decided to add such a delicious twist to every component of the original game that made it such a terrifying delight for players – in the process, creating a game that feels ambitious and bold, while still distinctly feeling like a follow up to The Dark Descent."

Staples of the original game – such as managing your character’s fear levels, as well as using light as a shelter and a defense against monsters you otherwise are powerless against – return in Rebirth, though all of them have been iterated and built on. Some of these changes are borne out by necessity – rather than taking place in late 19th century Prussia like Dark Descent, Rebirth takes place in the early 20th century in an Algerian desert. The change in time and place means that the lighting system sees several gameplay changes. You are no longer using tinderboxes to light lamps, for example. Instead, matchsticks are now extremely limited consumable resources that you can use to light up torches, lamps, and other light sources in the underground caverns and dark passages you traverse in this game.

It sounds like an incredibly minor change, but it has instant implications that change the flow of the game substantially, adding a bit of Resident Evil style resource management. You have to be careful with how, when, where, and why you use a matchstick, because you might not have any later on in time when you desperately need one. Matchsticks can also be used as light sources in and of themselves, allowing you to light one even as you slowly skulk your way through the darkness.

This creates a kind of dynamic tension to proceedings, especially when you also have to contend with Rebirth’s take on the insanity and fear mechanics from The Dark Descent. Yes, you still have to manage the protagonist’s fear levels, and yes, being in the dark makes her more scared – which means sometimes, against your better judgment, you may be forced to light up your precious last match because protagonist Tasi’s fear levels are rising uncontrollably, thus putting yourself in a bind down the line when you’re in a precarious situation and need light – but the absence of light might mean you make a run, avoiding lingering on too long, and missing some further matchsticks you could have found, further perpetuating the loop of horror. Conversely, you may end up lighting a matchstick and attracting the attention of something that was otherwise close by but that you may have been able to slip past in the darkness – but now it knows where you are.

It doesn’t always have to play out that way, but the larger point is that this creates for a very dynamic kind of psychological horror that constantly keeps players on their toes. You aren’t allowed to just hoard and stockpile resources, because you need to make sure you’re not getting too afraid – and giving the ability to decide when it’s light and when it’s dark to the players means that they will each have their own unique ebbs and flows of fear and horror, driven entirely by how they respond to fear. 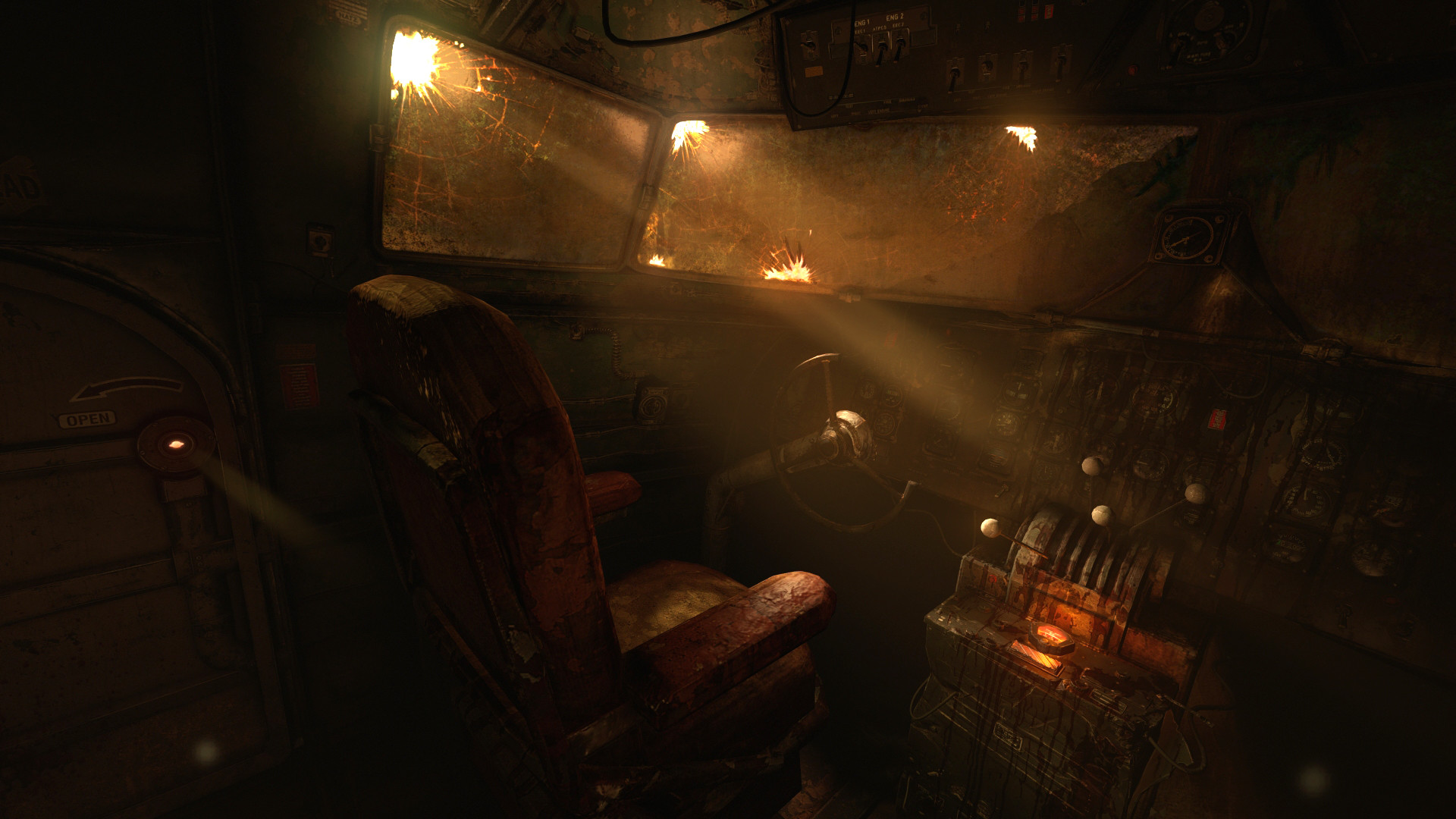 "You aren’t allowed to just hoard and stockpile resources, because you need to make sure you’re not getting too afraid – and giving the ability to decide when it’s light and when it’s dark to the players means that they will each have their own unique ebbs and flows of fear and horror, driven entirely by how they respond to fear."

Weaponizing fear and somehow translating it into an effective gameplay mechanic that the entire experience is then balanced around is something that Frictional Games have been trying to do for years now. Indeed, we saw some glimmers of this in Dark Descent, though some of that game’s systems had enough unintended consequences that crafty players learned to game the systems in that title. With Rebirth, I feel like they may just have pulled it off this time around.

Dark Descent had this problem where, upon dying, you’d restart at the most recent checkpoint (without your progress resetting), but to make sure players couldn’t just learn enemy layouts and patterns by dying repeatedly, randomized enemy spawns and placements each time the player started after death. Different enemies may show up in different places the next time around – or sometimes, no enemy would show up. And once players figured out that could happen, many just started to throw themselves at enemies over and over again until they just disappeared, reducing the game’s psychological scares to tangible and predictable gameplay mechanics.

Rebirth fixes this, because death no longer works the same way as it did in that game. There are similarities, of course – you still see your fear levels rising, and you still have audiovisual distortions and hallucinations as your fear levels rise – but the consequences for death are now very intrinsically tied with the game’s story, and how it plays out. 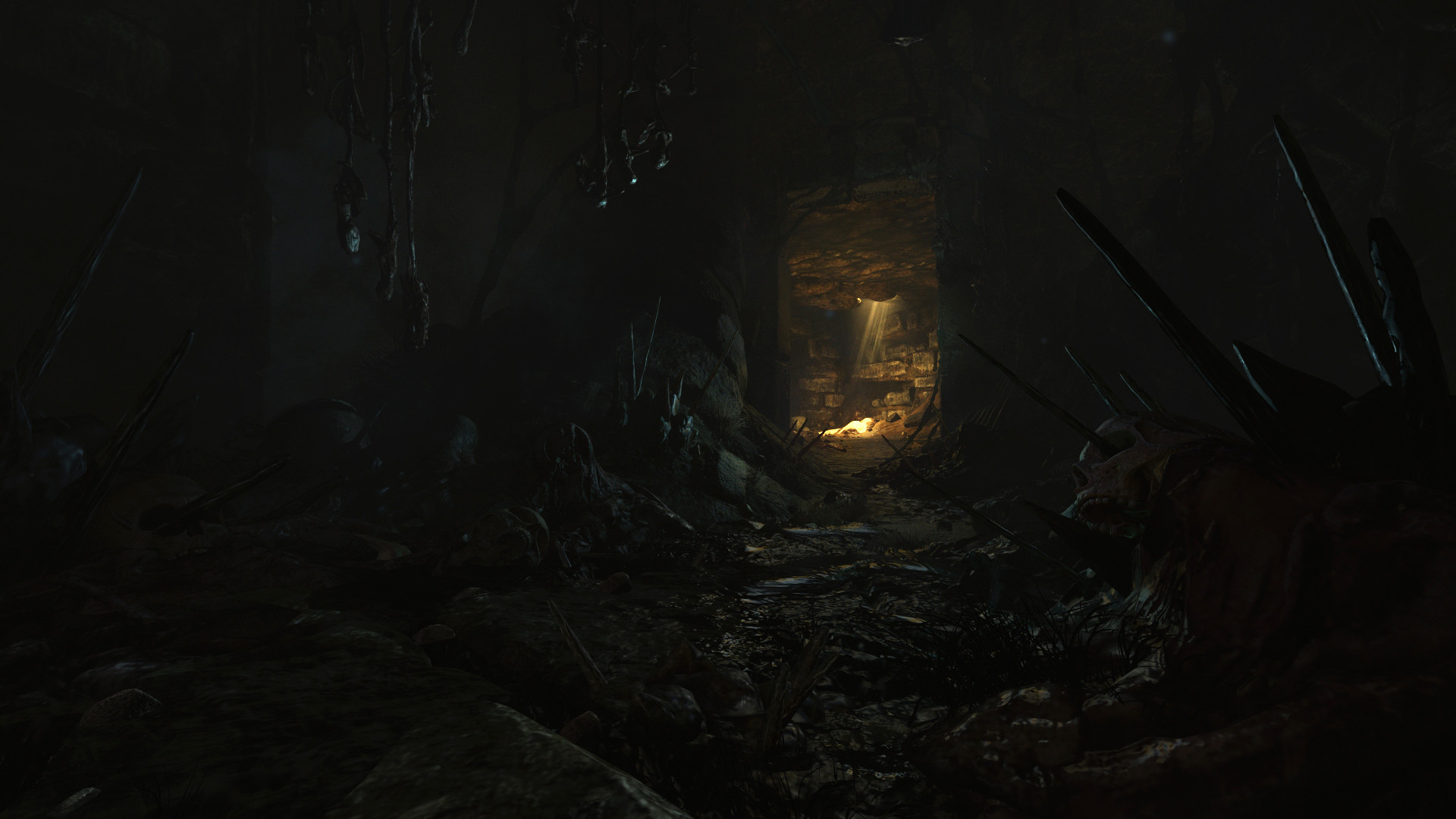 "This might be Rebirth’s biggest strength- the way it marries gameplay mechanics with storytelling, making one crucial to the other, and both in service to the game’s overall themes (and its goal of scaring the crap out of you any chance it gets)."

This, perhaps, might be Rebirth’s biggest strength- the way it marries gameplay mechanics with storytelling, making one crucial to the other, and both in service to the game’s overall themes (and its goal of scaring the crap out of you any chance it gets). While Rebirth’s story connects to Dark Descent, it’s pretty standalone and you can play it even if you never tried out the original game (though, as an aside, definitely go back and play the original game, because it’s really good). You play as Tasi, who wakes up in a desert after a plane crash, with her immediate memories a mess, and no one else around. Disoriented, Tasi sets out to find her family, following a trail of debris that leads her across a desert, through subterranean caves, old forts and seemingly abandoned structures, and more. The story, again, plays out in smaller environmental details and notes, as well as fragmented, non linear monologues and flashbacks.

Going back to how this setup ties into gameplay, Tasi is suffering from a mysterious illness, an illness that gets worse the more stressed or afraid Tasi gets. Getting too afraid causes the disease to encroach upon her and her sanity even further – and the worse her illness gets, the direr the consequences can be for her or for her family, and how things end up playing out for her.

All of this, of course, helps add a reason for players to keep Tasi sane and safe – but it also adds further to the dynamic nature of how each player’s story and experience plays out, and, again, makes knowing the game and therefore reducing Rebirth’s scares to abstractions such as gameplay systems, that much harder, keeping things unknowable, and therefore, fear-inducing. It also, again, marries gameplay and narrative to a level that is rare for most other games.

There is a lot more to the story, things that are best left unsaid because it is better for the player to discover them themselves, but it ends up dealing with a surprising amount of very human themes and insecurities – some very disturbing, so much so that the greatest scares in this game might not be the immediate horror of being in the dark surrounded by unknowable abominations, but the implications of Tasi’s journey, which will stay with you and haunt you for a while to come. 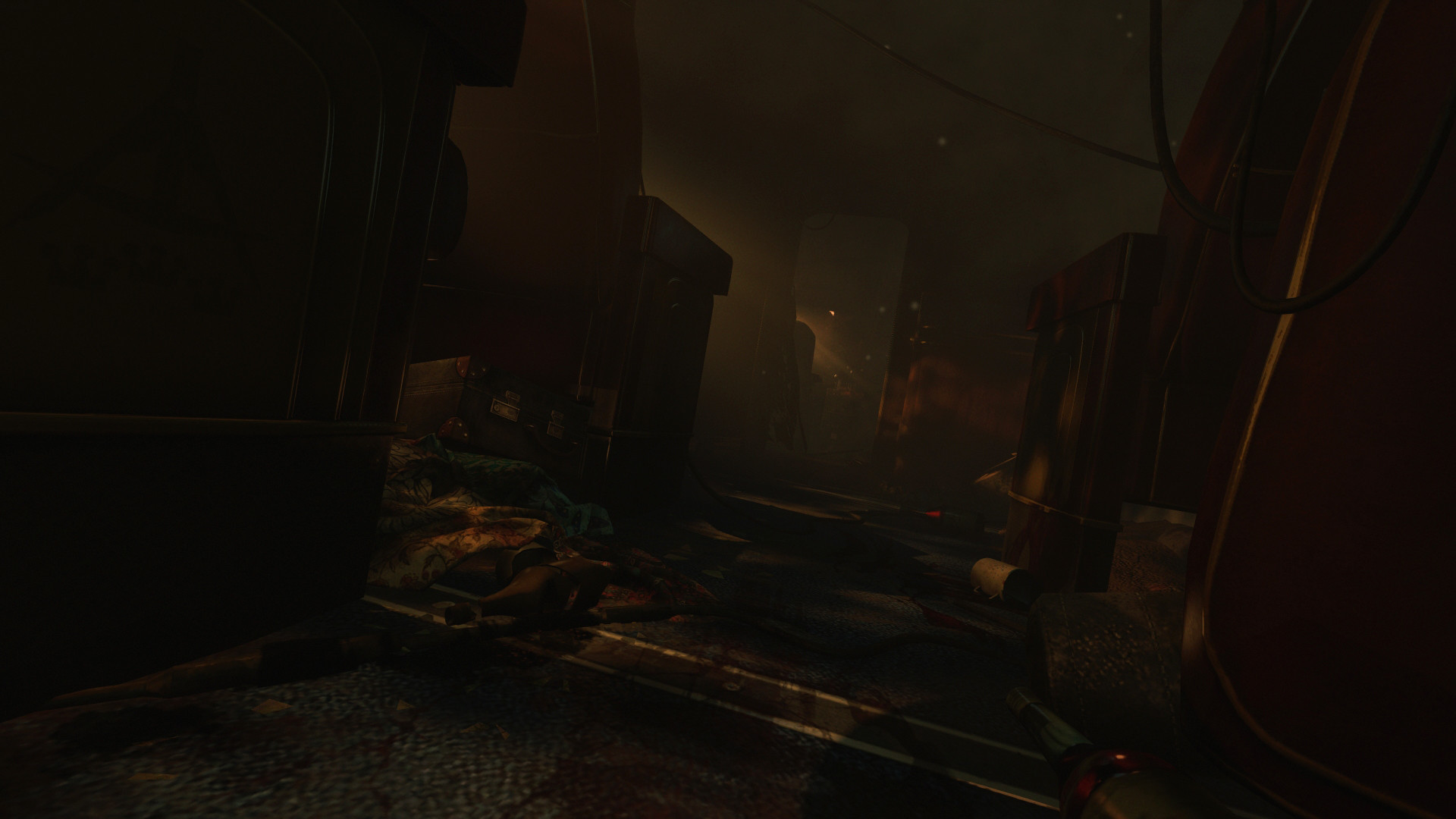 "Special mention must go to the game’s fantastic sound design, and how it enhances the scares so effectively."

Rebirth is certainly a resounding triumph of vision and execution, and it succeeds on additional levels that help sell its central, horrific fantasy. Special mention must go to the game’s fantastic sound design, and how it enhances the scares so effectively. The game’s sense of place and the tangibility of its world and everything within it also helps make Tasi’s plight and her helplessness against the forces that surround her feel that much more substantially real.

There certainly are a few shortcomings – for instance, performance can be somewhat unsteady on a base PS4 system (though this isn’t ever too bad, and are at worst isolated, slightly noticeable judders). Those who are looking for a safety mode in the vein of Frictional’s previous outing Soma (which removed all the monsters from the world) are also going to come away disappointed – although to be entirely fair, the monsters this time around are a far more central and intrinsic part of the game’s narrative and mechanical design, so I can’t see how such a mode would be possible. Other problems can also similarly arise from the game’s intended design, such as a lack of immediate feedback for the player, which may make them frustrated. A lot of the problems in Dark Descent, on the other hand – such as its low replayibility due to a relatively short play time and little variation between playthroughs – have been addressed to a large degree with the dynamic and variable nature of Rebirth.

Amnesia Rebirth is a daring, audacious, and bold follow up to The Dark Descent, that expands upon it, and realizes developers Frictional Games’ longstanding quest to turn human fear itself into a gameplay mechanic to a startlingly large degree. It’s a terrifying treat, which elevates horror to a level beyond anything they have achieved before. The original Amnesia is regarded as one of the best and most influential horror games ever made – in time, I can see Rebirth joining those same ranks too.

Incredible atmosphere; Inextricable blend of storytelling and gameplay; Game mechanics that leverage player fear as their primary base to a shockingly effective degree; Great sound design.

Frictional Games’ long-standing goal to weaponize players’ own fears against them bears fruit in Amnesia: Rebirth, in their most ambitious and tautly designed work to date.

A copy of this game was provided by developer/publisher for review purposes. Click here to know more about our Reviews Policy.
Tagged With: Amnesia: Rebirth, Frictional Games, pc, ps4