Assassin’s Creed was released back in 2007 and majority of the reviews criticized the repetitive missions and the imbalance found in the game play. Fortunately Assassin’s Creed II takes care of all those issues and is a major step ahead of its predecessor. Assassin’s Creed II takes place during the era of the Italian Renaissance in the mid 1400’s. You will be playing the role of Ezio Da Audiotre Da Fireneze who is a descendant of Altair, the protagonist of the first game. I won’t go in to the story too much since I don’t want to spoil it for you, so I will be just touching the borders of the plot. Ezio’s father and brothers are duped in to a conspiracy and hanged to death by one of the villains in the game. The events that take place right from the childhood of Ezio util he becomes a fully trained assassin is truly amazing and a treat to watch.

The story begins where the original left with Desmond still stuck in Abstergo Industries. Lucy, who returns for the sequel, frees him and both of them run away to a secret location where the latest version of Animus has been installed, called as Animus 2.0. Desmond meets some of his new friends and you will be put into the Animus in no time. The story this time is much more understandable compared to the last one and it gives more inputs as to why and what the modern Templars are after. The events which takes place in the game and the historical similarities make the plot much more appealing and this is proof enough that the content writers at Ubisoft have done their job immaculately. 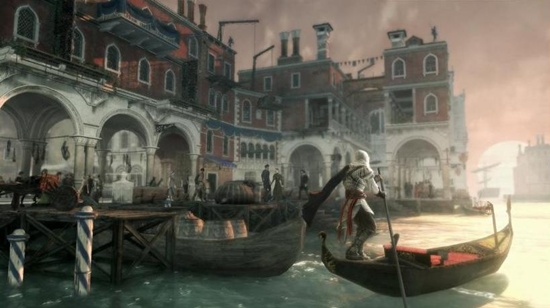 Now the assassin can row a boat and swim too!

Gameplay is where the heart of Assassin’s Creed II lies. The most amazing thing about it is that you will never ever get the feeling that a particular mission is getting repetitive which was the case with the first one. Of course, being an assassin, Ezio’s primary missions are all focused on assassinations of important targets, but the means to achieve them are vastly varied. The developers have introduced the economic system in the game where you can hire mercenaries, courtesans and thieves so that they can be used for distracting the guards. This is pretty easily implemented in the game. You will earn money as you play through the game and he can hire the aformentioned NPC’s to use them to his advantage. There are numerous occasions in the game where the player has to trail the target surrounded by guards. So what do you do in such a situation? You hire a couple of thieves who will distract the guards and hence clearing the way for you. There was one particular mission where you have a group of mercenaries fighting alongside you, to take down 20-30 soldiers, which again shows that these people were felt to be needed in the game. Now this brings me to the importance of the economy in the game. As I mentioned above, Ezio will be earning money as he completes his missions, by looting or by pick pocketing.

So what will you be doing with the money? Ubisoft have created a number of shops in the game where you can buy armor, medicine paintings, learn new moves, invest in business and get greater returns. The ways in which you can just spend and earn the money is endless. At many occasions I got the feeling that the game is going towards a more RPG way, but whenever that happened, immediately some action appeared which will make it a sort of an action rpg hybrid. 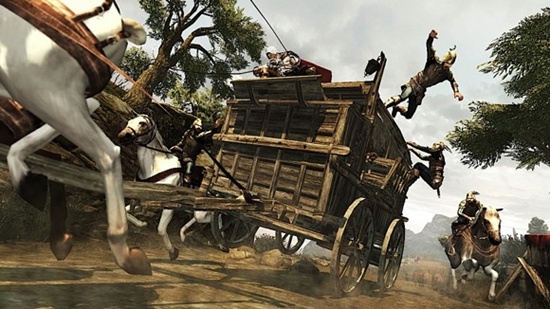 The cart chase sequence was one of the highlights of the game.

One thing the original did not have was a variety of interesting weapons. Assassin’s Creed II has a ton of them. Besides your infamous hidden blades and throwing knives you can also buy all sort of weapons like swords, spears and hammers from the ammunitions shop. But remember they can break as you use them. Also you will be coming across something know as codex pages. These pages though essential to the story line will also upgrade you hidden blades to do some amazing tricks. One of those makes your hidden blade to work as gun to take down long distance targets. The other one was the double blade attack and believe me it never got old on me. Besides all of that, small things like smoke bombs and the ability to throw money (an amazing trick when running away from guards) adds a great dimension and fun to the game play.

Besides the main missions there are a ton of side missions to be played in the game. Those missions vary from assassination contracts, sprints, courier services and finding assassination tombs. In sprints you are challenged by a guy where you have complete checkpoints in a limited amount of time. It’s nothing innovative but it could get really challenging for the newcomers. Courier services require you to transfer some goods from point A to point B and being careful to avoid the nearby guards. But the most unique among all side mission has to be Assassination Tombs. These side missions involve solving complex puzzles, innovative platforming sections, hard chase sequences, combat and a few other things. There are six assassination tomb missions available in the game where you have to find seals. Once you find all of them you will be able to unlock Altair’s costume. Talking about the platforming mechanics, the developers have kept their tried and tested way of platforming as found in the first game. However Ezio looks like he’s a bit faster and athletic than Altair and can also do some higher jumps, a trick which you will learn in the later stages of the game. Occasionally the camera might act stupid and hence there is a chance you might miss a jump or two, but it was an issue present in the original as well. May be it’s due to the nature of the design but I found it to be bugging me at times. The game also features new type of enemies. Of course you will have your assassination targets, but besides them you will also have to fight against regular guards, Seekers who can find you even if you are hiding, Agiles who can run as fast as you, Brutes are really powerful and are a bit hard to take down and the Archers which were found to be in the first game as well.

Which brings me to the combat in the game. Ezio fighting style and stance are extremely similar to Altair, but he can do some really cool close quarters combat depending on what weapon you are holding in your hand. Combat looks amazing when the player is in full swing, Ezio slicing through the chest, or inserting a dagger in to a head looks brutal but is damn satisfying.

Combat hasn’t improved much, other than some cool new additions, but it still looks and feels exciting.

Ezio will be going through various historical places in the game such as Venice, Forlì, San Gimignano and Rome. They have been designed beautifully with each of the cities having a distinct look. In Venice it will be a bit pinkish and people will be colorful. There will be canals where you can row your boat across. And did I mention Ezio can swim too? San Gimignano is shown as a developing city and you as a player have to invest money itto it so that its value grows. There is also a day night system which makes a city like Venice really shine. Ubisoft is well known for developing visually appealing games and Assassin’s Creed II is right up there. Sound in the game is top notch. I really can’t describe the brilliant suspense music which is played when you approach the target. For each city again we have different background scores. The voice acting is phenomenal to say the least.

There is so much to do in Assassin’s Creed II even when you are done with the game. After finishing the 100 so primary missions you will have an equal or more number of side missions to be played. The game is perfect in almost every sense and even some issues like that one I had with the camera don’t really take out anything from the exciting times that I have had with Assassin’s Creed 2. I am now in to my 40th hour of this game and for 60$ it’s a steal. Assassins Creed 2 is a stellar achievement and it will be really interesting to see what Ubisoft does with the inevitable Assassin’s Creed III.

Breathtaking visuals, Story will suck you right in, Economic system is fantastically implemented, Assassinating never gets old and repetitive, Numerous side missions

Camera can be occasionally irritating

Final Verdict:
EDITOR’S CHOICE
Assassin's Creed II is a phenomenal achievement and is a game that you should play regardless of what system you own.
A copy of this game was provided by Developer/Publisher/Distributor/PR Agency for review purposes. Click here to know more about our Reviews Policy.