The Siege of Paris is an enjoyable extension of Valhalla, but it doesn't feel entirely unmissable.

Assassin’s Creed has a history of getting really weird with its DLCs. Syndicate’s Jack the Ripper DLC saw us hunting down the infamous titular serial killer, Origins’ The Curse of the Pharaohs expansion took players into the fantastical afterlife, while Odyssey’s The Fate of Atlantis expansion was a rollercoaster ride through gorgeous locations from Greek mythology. Assassin’s Creed Valhalla has been significantly more reserved with its expansions, surprisingly enough. Wrath of the Druids had some mystical elements thrown in, but largely felt like an extension of the base game without anything meaningfully unique to add, as good as it was. The Siege of Paris follows a similar ideology. It doesn’t advance the plot forward in any way, and in many ways, it feels like just another episode of Valhalla– but if you’re looking for a solid chunk of enjoyable content regardless of how unique it is or isn’t, there’s a lot to like here.

As its name suggests, The Siege of Paris takes Eivor across the channel to the kingdom of Francia. Two visitors from the Elgring clan of Norsemen in Francia arrive in Ravensthorpe, hoping to recruit Eivor to their cause as they prepare to ransack Paris. Eivor agrees to travel with them, but for entirely different reasons, knowing that if Charles the Fat, the king of Francia, continues his bloody conquest of the kingdom and culls out all the Northerners there, he might very well eventually turn his attention to England next- which would be bad news for the Raven clan.

"The Siege of Paris doesn’t advance the plot forward in any way, and in many ways, it feels like just another episode of Valhalla– but if you’re looking for a solid chunk of enjoyable content regardless of how unique it is or isn’t, there’s a lot to like here."

Much of The Siege of Paris plays out like any number of the arcs in Valhalla’s base game did- there’s negotiations, attempts at parley, rulers butting heads with each other, talk of war, political intrigue, all that stuff. There are some good characters in there, with the likes of the vengeance-driven Sigfred, his more level-headed niece Toka, and the unhinged King Charles being standouts (and all very well voiced), but the story itself isn’t very special. It plays out the way you would think, doesn’t do anything too surprising, and doesn’t really make much of a mark. It’s not bad by any means, but after how essential something like The Fate of Atlantis felt for Odyssey’s story (and really, to the story of Assassin’s Creed as a whole), this much more self-contained and low-flying expansion feels a bit too subdued.

Another area where The Siege of Paris doesn’t set itself apart from the base game too much is Francia itself. Where the craggy landscapes of Ireland in Wrath of the Druids felt fresh and unique, Francia is hard to differentiate from England for the most part, with most of the map (which is surprisingly small- smaller even than Ireland) being characterized by rolling country interspersed with dense urban locations. Exploring it and tacking world events and optional activities is still fun, as it was in Valhalla itself, but it’s disappointing The Siege of Paris doesn’t grab the opportunity to take players to a different and memorable location.

Thankfully, the one area where the expansion does set itself apart from anything Valhalla has done is its mission structure. The Hitman-style sandbox stealth-focused missions of Assassin’s Creed Unity are back. Now called Infiltration Missions instead of Black Box Missions, these offer choices and missable content, emphasize stealth and exploration, and reward curiosity, experimentation, and replay value. Not nearly as much as something like Hitman, of course, but quite enough to stand out nonetheless. Wearing disguises to get access to restricted areas, following unique mini-stories to unlock several ways of getting into locations or killing targets, encouraging exploration of areas that lie off the beaten path to learn new information that might help you later on- these set-piece missions (of which there’s plenty in The Siege of Paris) are characterized by all of this and more.

Stealth has become increasingly de-emphasized in Assassin’s Creed game ever since it switch to the action RPG formula with Origins, much to the dismay of series fans, but the Infiltration Missions in this expansion put it front and center once again, and they feel like a breath of fresh air. They’re smartly designed and avoid a reliance on following waypoint markers, instead encouraging player agency and exploration, and never fail to be immensely engaging and satisfying. Without a doubt, these missions are the highlight of the expansion, and prove that Assassin’s Creed can still successfully strike a balance between its two distinct eras- if it cares enough to do that.

The new abilities introduced with The Siege of Paris also favour stealth over out-and-out combat. One ability summons a swarm of plague rats on enemies, another lets you stick a bomb in a foe’s chest, while another yet lets you shoot an arrow at foes to make them sick, start throwing up, and eventually die. For those who favour ranged builds and a slower, stealth-driven approach (as I do), these are great new additions to Eivor’s ability pool, and can be quite effective (even more so once they’re upgraded). 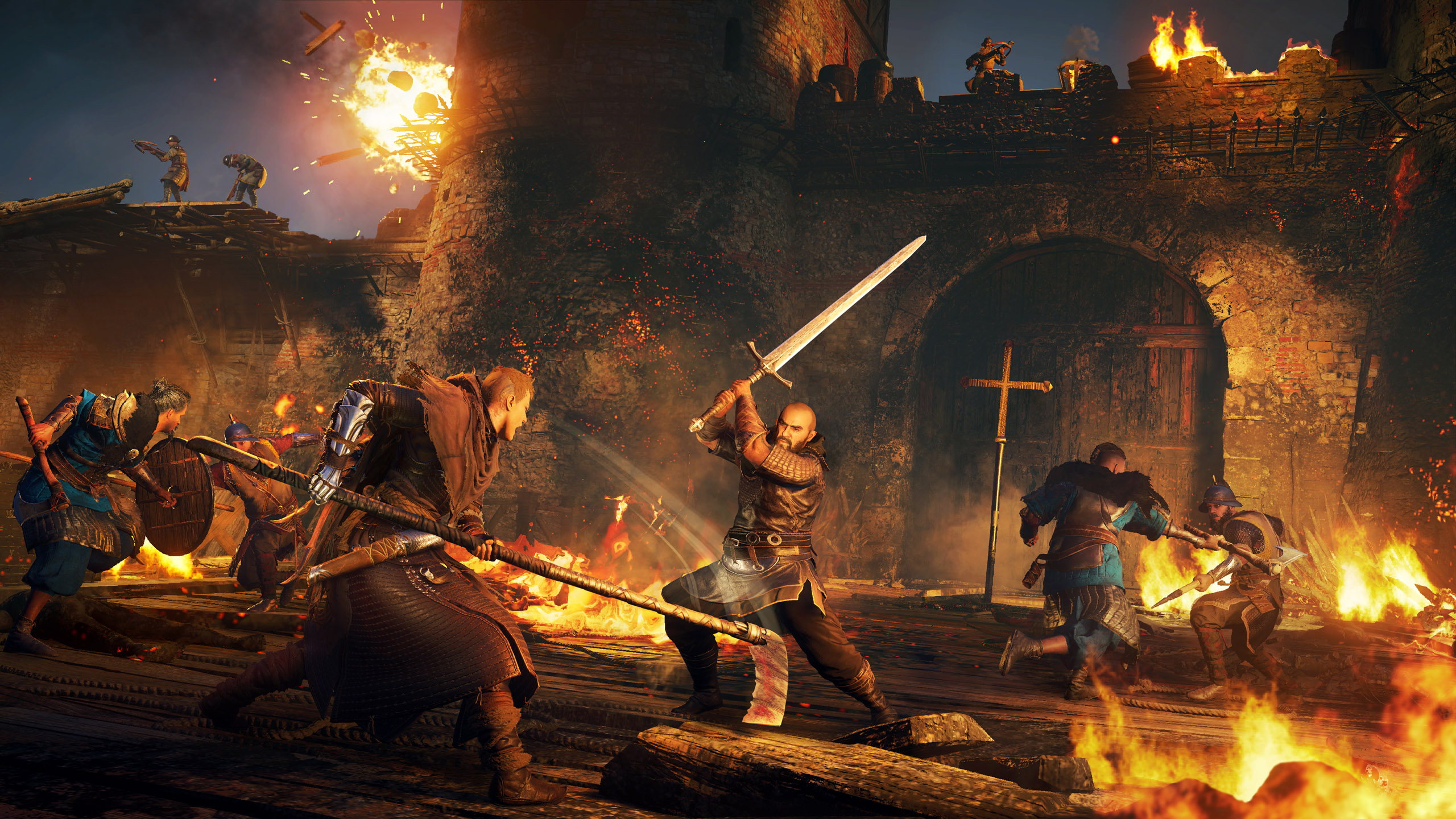 "Stealth has become increasingly de-emphasized in Assassin’s Creed game ever since it switch to the action RPG formula with Origins, much to the dismay of series fans, but the Infiltration Missions in this expansion put it front and center once again, and they feel like a breath of fresh air."

Speaking of plague rats- their inclusion in The Siege of Paris is kind of… unnecessary? They’re given quite a bit of the limelight as a part of the world, but they’re always just there in the background, with not much else to do other than adding flavour to the setting. Maybe it’s just the A Plague Tale fan in me that was disappointed at how they’ve been utilized. In terms of gameplay, there are a few sections here and there where you have to shepherd them into open grates and then block those grates with objects, but these sections, too, are infrequent, and hardly anything more than an annoying nuisance. Rats in general just feel haphazardly bolted on to an experience like an entirely unnecessary afterthought.

Meanwhile, there’s other more granular additions as well, for those who’re looking to keep building their character in what might be one of the most gargantuan action RPGs in recent memory. New skills have been added to Valhalla’s ever-growing skill tree, while there’s also a couple of new weapon types and gear pieces to hunt down and equip. One of those new weapons is a two-handed scythe, which feels like an appropriately brutal and satisfying-to-use addition to Valhalla’s collection of combat tools. None of these are headlining additions, by any means, but they’re definitely a nice bonus.

My final thoughts on The Siege of Paris are, in the end, quite similar to my final thoughts on the previous expansion, Wrath of the Druids. For those who’ve enjoyed Assassin’s Creed Valhalla, this expansion offers 7-8 hours of more, similarly solid content (or 14-15 hours, if you don’t just stick to the main story), but if you’re looking for a unique experience that will instantly etch itself into your memory, this is not that. The Infiltration Missions definitely make this very easy to recommend to Assassin’s Creed fans who miss the series’ older era of games, but this is still an inessential piece of content. As enjoyable as it is, as an expansion to a game that’s already a whopping 80 hours long, it needs to be something more than “more of the same.”

With more support having been confirmed for Valhalla in 2022, we’ll hopefully get some of that next year. As things stand right now, both of its expansions have been good- but unremarkable.

Forgettable story; Francia is too similar to England; More of the same.

Final Verdict:
GOOD
The Siege of Paris' Infiltration Missions will surely appeal to fans of classic Assassin's Creed games, but by and large, Valhalla's second DLC feels like more of the same. It's a solid expansion, but far from essential.
A copy of this game was provided by Developer/Publisher/Distributor/PR Agency for review purposes. Click here to know more about our Reviews Policy.