A New Zealand retailer may have confirmed the game’s next gen readiness.

A New Zealand retailer has recently listed Batman: Arkham Origins for the Xbox One and PlayStation 4. Though the listing has since been removed (we wonder why), screencaps of the same are still available. Check them out below. 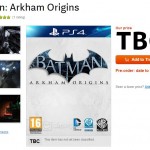 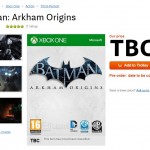 Though Warner Bros. Montreal announced Arkham Origins for PC, Wii U, PS3 and Xbox 360, initial rumours for the game revealed that it would be a cross-generational title that would arrive for the next iteration of Xbox and PlayStation. It could be that Warner Bros. Interactive Entertainment will reveal the same at a later date, but this is the best indicator we have currently.

Batman: Arkham Origins is a prequel to Arkham Asylum and follows a significantly less experienced Batman as he wars against Black Mask and a cavalcade of assassins hired to kill him. This includes famous DC villains like Deadshot, Deathstroke and more.

Arkham Origins is currently slated to release on October 25th 2013.