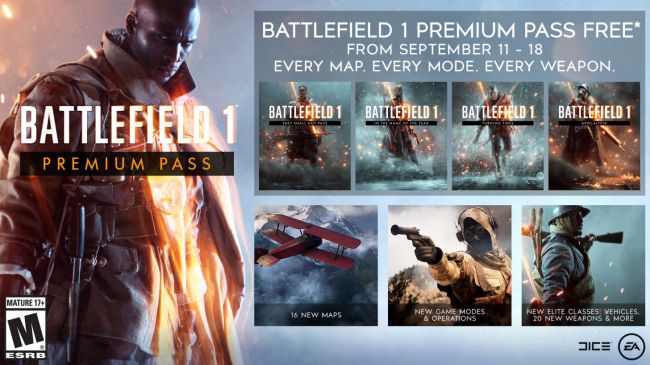 It’s September, and this week marks the arrival of the Battlefield 5 open beta. It will be available on September 6th for all platforms. However, if you’re subscribed to Origin Access Premier/Basic/EA Access or have pre-ordered the game, then the beta goes live early on September 4th.

What do you do when the beta ends on September 11th? For owners of Battlefield 1 who haven’t picked up the Premium Pass, it will be totally free. This applies only to Origin users and is valid up till September 18th. However, the Premium Pass is yours to keep beyond that.

Encompassing all four expansions – They Shall Not Pass, In the Name of the Tsar, Turning Tides, and Apocalypse – the Premium Pass gives you access to tons of additional maps, modes, weapons, vehicles, and so on. That should keep you busy until Battlefield 5 launches.

Speaking of which, Battlefield 5 was recently delayed from its October release date to November 20th. Feedback from the beta will be taken into account for the final game though. For a full rundown on the changes in the beta, head here.

Tagged With: apocalypse, battlefield 1, DICE, EA, In The Name of the Tsar, Origin, pc, They Shall Not Pass, Turning Tides