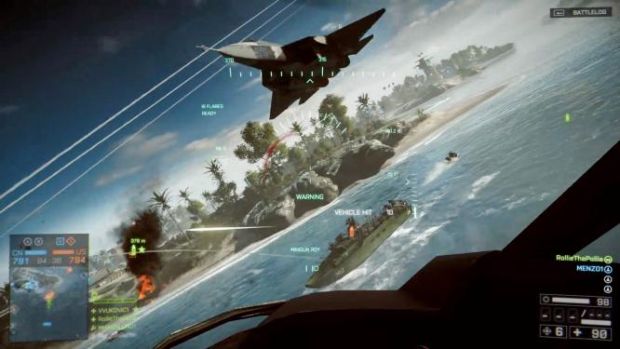 A user on YouTube recently had a chance to try out Battlefield 4’s jets in the Paracel Storm multiplayer map during Conquest. Some new details have been shared, along with a video which you can view here.

Jets still a turning speed of 313, with greater range of speed and tighter turns as compared to Battlefield 3. The turn radius will be reduced, making for smaller loops, and there will be higher movement speed. Like in the End Game DLC, jets will now begin from mid-air as opposed to taking off from a runway. The third person view is at an angle higher than before, with the nose still pointing upwards on the screen even if the jet rolls. The orientation feels different from Battlefield 3 and will take some getting used to for sure.

There will be different ammo types for the main gun, which may vary depending on your class and the type of plane you choose. Three types of anti-air missiles are available, which include Full Radar, Half Radar and Infra-red. Full Radar can search for a target automatically, which Half Radar needs a constant lock. Infra-red is more reliable as you can simply fire the missile and it will head to the target without need for a lock.

Some of the unlocks for jets include JDAM Bombs, which function as both dumb bombs, and can onto laser-designated targets. You’ll also be able to track targets using vapour trails, which should help better in dogfighting. There will also be a new Disable system, that will help you in maneuvering and regenerating health.