For the purposes of dispelling bias in the following article, it must be declared that I have a soft spot for the Battlefield series. The roll of tanks at your side and the hum of jets/helicopters above you as you find your way around your 16-32 man strong team; it gives an indescribable sense of scale that few games can muster. That said, some elements of Battlefield 3 just weren’t doing it for me. There was a lot of good in EA DICE’s most recent military romp, but there were a few things that just didn’t quite capture the usual Battlefield magic. Here are five of the big potential issues that could befall Battlefield 4 as well, potentials that we can only hope DICE will pick up on. 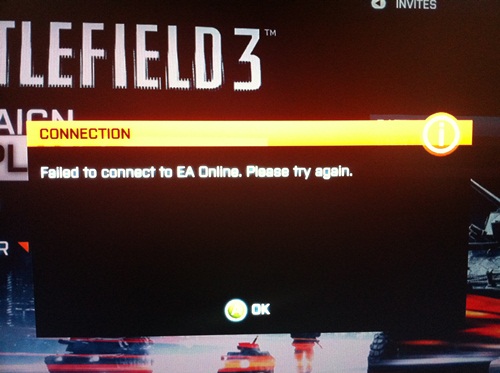 First day online matches never really go smoothly for any game with a multiplayer focus. Launch day always seems to be reserved for single player while you wait patiently for the developer in question to sort their servers out. Of all multiplayer games I’ve experienced this with though, Battelfield 3 had some of the worst server issues ever during the launch weekend. Quick launch wouldn’t work on consoles, latency was off the charts and getting into a game was a lottery rather than a certainty. This didn’t just last for the launch weekend mind, as these issues persisted well into the weeks following BF3’s release for many users. Very few games get it completely right, but if BF4 could get a smooth launch in terms of server support, it would really play to the series’ strengths in the multiplayer department.

Having failed to get into a multiplayer game over the launch weekend of BF3, I reconciled myself with the joys of the single player campaign. That is until I realised it wasn’t actually very fun. Some of the narrative ideas were interesting, but the story as a whole wasn’t especially memorable and the set pieces were mediocre at best. The big killer though was the linearity of it all, a far cry from the unassuming, but pleasantly open ended, campaigns of the Bad Company series. If BF4 is going to have single player, make it a campaign that actually captures the essence of what the Battlefield series has always been about.