EA is at it again, this time sending out a 20 pound package ahead of BF4’s reveal.

EA and DICE have sent out a “mission package” to invitees for the upcoming Game Developers Conference. Weighing roughly 20 pounds and made of solid metal, the package had the logo for Battlefield engraved on top of it. It’s certainly not above EA to send scary things to the media, that’s for sure.

However, the mission package was revealed to have four specific things: a GoPro (which is a wearable helmet camera, Medal of Honor Warfighter for Xbox 360 and PS3, Battlefield 3 for both consoles and of course, an invite to the Battlefield 4 Reveal. 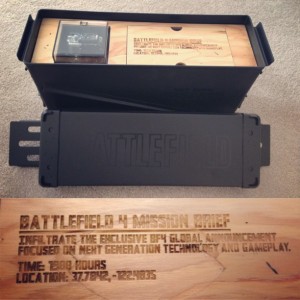 First, a few questions: Why in the world would EA send out a GoPro camera? Unless it’s trying to emphasize the whole military theme of the package but we smartphone cameras. And no, we’re not questioning why they sent out copies of Warfighter and BF3. It’s EA – they must have some spare copies lying around.

Regardless, stayed to this year’s GDC to see what the next Battlefield has in store for us.