Battlefield 4: What Does The Deluxe Edition Include?

Three Gold Battlepacks, for a start. 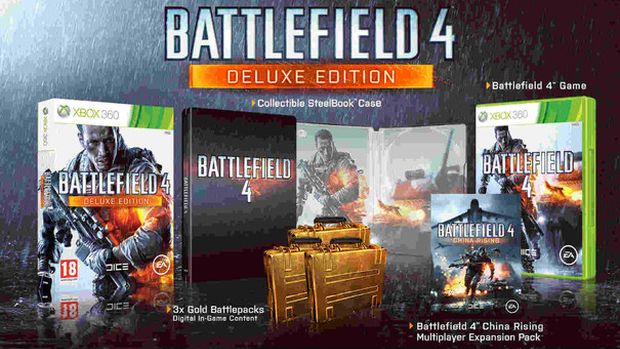 Currently available for purchase at GAME in the UK, Electronic Arts has revealed more details for the Deluxe Edition of Battlefield 4, which is set to release on October 29th for North America and November 1st in Europe.

The Deluxe Edition will include three Gold Battlepacks – which reportedly contain new weapon accessory combinations, dog tags, knives, CP boosts and character customization items – a Steelbook and the China Rising DLC pack along with the game itself. It retails for £64.99 on Xbox 360 and PS3, with the PC version costing £54.99. As to the Battlepacks, there will already be one free per pre-order of each game, with separate purchases from the in-game store.

DICE’s Battlefield 4 will be the first game to feature the new Frostbite 3 engine and will also release for the PlayStation 4 and Xbox One in Q4 2013. The game will be expanded to feature a larger scale of destruction and rumours indicate that it may support up to 70 players in multiplayer for the future.