Today, we received the debut trailer for the next entry in Activision’s long running, at this point unrecognizable from its debut, Call of Duty series. It generally seems to have been received well (even though a lot of the excitement seems to be for the remaster of the ten year old Modern Warfare as opposed to the brand new, shiny game that we are getting this year.

However, there is at least one group that is vocally unimpressed by the new game- and unfortunately, they’re being rather unprofessional in how they express that. This group is a bunch of people at DICE, who are currently working on the next Battlefield game, which is also due to debut later this week.

Some of the tweets in question have been deleted- though they were screencapped, so we can see them anyway. But yes, it is shocking to see that a development team would behave this way. There is no class in this, and in spite of claims made to the contrary, this is mean spirited, as opposed to friendly ribbing. I generally like DICE, and I like Battlefield– but something like this leaves a bad taste in my mouth.

(Thank you PlayStation Lifestyle for the pictures) 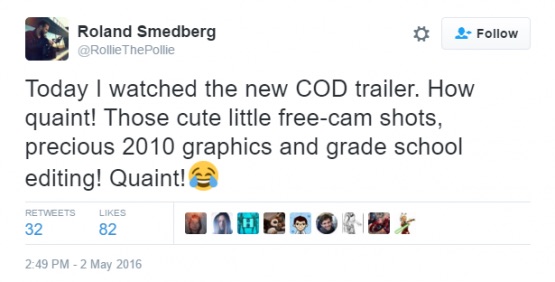