Bioshock Infinite: Standing Tall for the Beast of America

Its cover art may seem simple, but as always, there's a deeper meaning.

Not too long ago, I had a discussion with a friend regarding the practice of flag burning. The practice is outlawed here in India (and very strictly punishable) but in the United States, it was always showcased a symbol of protest. A message to the government saying this wasn’t the country they belonged to. Attacking the facade built around them by burning their most sacred symbol.

I had always wondered why patriotic individuals would burn their symbol of allegiance and it was clear that the allegiance wasn’t to the symbol but the ideals it represented. And when it no longer stood for those ideals, well, as we sang during Christmas, deck the halls with gasoline. 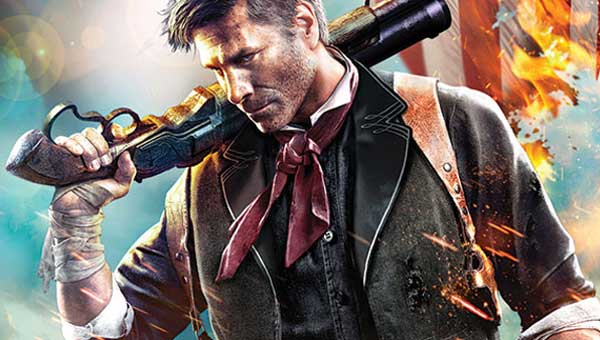 For those who don’t know by now, Irrational Games’ Bioshock Infinite is attracting it’s fair share of flak. No, not because it won’t be arriving on the Wii U or because there’s no multiplayer but because of it’s cover art. It showcases the game’s protagonist, shotgun in his hand and perched against his shoulder, standing in front of a burning flag. Criticism has ranged from having “a game involving floating islands, mechanical creatures of all shapes and sizes, the existence of reality shifting and time-bending magic and sky-ziplines, and the best you can come up with is a Generic, Grizzled, White Protagonist that you can’t even see, because it’s First Person, holding a generic shotgun over his shoulder” (via Reddit) to “This box art is designed, one suspects, for its mass appeal and familiarity. Which is weird, because BioShock Infinite itself looks unique, looks nothing like Call of Duty. And I don’t particularly care to see my first-person character, to be honest, even if he does look a lot like an even more rugged Nathan Drake” (Forbes).

And they have valid points. But that’s one way of perceiving it. Look at it from a normal person’s view, or even from the view of some one who’s never played a Bioshock game or knows nothing about the series at all. 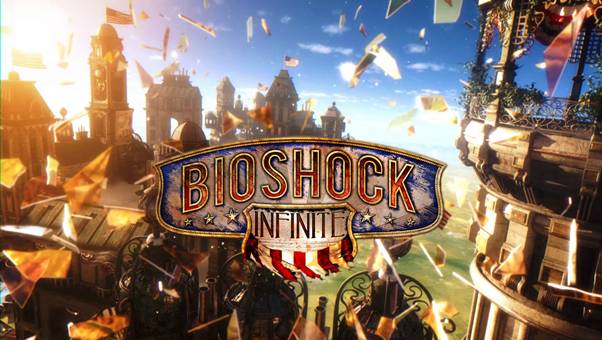 Look at the “Beast of America” trailer that released. The song, by Nico Vega, helps outline the big bad world, with a grizzled individual who’s lost his allegiance, viewing the symbol as one of oppression rather than freedom, embarking on a simple mission that becomes more complicated. The cover itself caters to that ideal – of a man on a mission. A man who’s sacrificed his ideals. Yes, he’s faceless in the game but so was Gordan Freeman. Did that stop Valve from trying to imbue as much character as they could into him? Or even from featuring him on the box?

Of course, Freeman was a scientist who accidentally invited a bunch of aliens to romp on Earth. Booker DeWiit, though, is caught in a war between the Founders who want to keep America “pure” and the Vox Populi (or “Voice of the People”) who want to overthrow their ideals. This stand against American Exceptionalism, the fight to overthrow oppression versus a set of ideals that were once good and have now been perverted serve the backdrop of the game.

Did we mention he’s a former Pinkerton agent, a group who helped prevent the death of Abraham Lincoln at some point, aka the government’s security dogs? Now how could that possibly tie in with the overall theme, we wonder? Oh wait, he’s white and macho! That’s the explanation! Plus burning flags look pretty.

Bioshock: Infinite might not have the most original cover art in the world. Heck, take a look at the trend of movie posters and games for the past, oh, two decades and see if you can point out a few running themes.

Regardless, when it comes to marketing it to those who have never played the Bioshock games, and introducing individuals to a brand new universe, the cover art is full of more meaning than we realize. If anything, it’s beauty is in it’s simplicity. One group will see a hardcore action hero, while those who dig deeper will find the very image of a man at war with the ideals that made his country great (and he doesn’t seem too pleased to have been dragged back into something so firmly rooted in his previous occupation).

As for other criticisms – such as Elizabeth, the strong female character not being featured – it stands to reason that she wouldn’t fit. As of now, she’s a bit of a mystery, an element of surprise in the tale. And leaving her off the cover, keeping it centered on the idealistic war happening is brilliant, even if unintentional.

So while one group may bemoan the lack of creativity in covers, the message Bioshock: Infinite’s conveys is clear. It just depends on which set of notions you want to look at it with.