Electronic retailers such as Best Buy and some others have now confirmed listings of the upcoming rumored the Uprising Downloadable Content for Call of Duty: Black Ops II A leaked image of a promotional card shows 4 new maps and a release date of April 16th 2013. 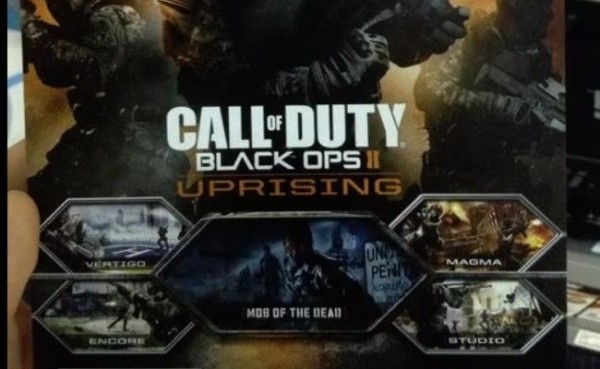 The 4 new maps are Vertigo, Studio, Encore and Magma. However,  the center of the card teases a new zombie map called Mob of the Dead. The images easily described the locations of Vertigo and Studo maps. Vertigo is located on a high rise, while Studio is located in a movie studio. Meanwhile, it’s hard to tell where Magma and Encore exactly take place. The background image of Mob of the Dead map suggests that it’s taking place in the Alcatraz, the former United States penitentiary. One of the community live members @LiamFTWinter managed to get an exact description of Uprising DLC  from the Xbox Live Marketplace upload registry.

Top Hollywood talent rounds out a cast of four Prohibition-era gangsters that are forced to fend off hordes of the undead while imprisoned on San Francisco’s notorious Alcatraz Island. While guard towers and new weapons offer tactical advantages, survival offers an unprecedented new challenge for these four lost souls.” Keep your eyes peeled for Call of Duty Black Ops II: Uprising on April 16th 2013.