Anybody who likes fighting games will find a lot to like about Central Fiction.

Ah, Blazblue. In a genre where a karate hobo throwing fireballs is considered pretty reasonable by character standards, how has the series not only over tripled the character roster since the first game, but kept that same intense degree of polish and balance, and still made each character unique, memorable and iconic? I guess it just reflects the talents of the development team and the blood, sweat and tears they poured into Central Fiction shows crystal clear.

Of course, the same as above could ring just as true about Chrono Phantasma (read our review here), which also proved to be a labour of love. Central Fiction adds some changes to the tried and tested battle system to shake things up, such as an actual countdown for the powered up state known as Overdrive, an overdrive ending super move, and rewards players with an active flow system for staying offensive.

Largely though, fighting is going to be familiar not only to series vets, but to any fighting game aficionado. Light, medium and heavy attacks, special attacks, special inputs, dashing, cancels, blocking, throws. It’s all present and laid out on the controller in the way you would expect, and customizable if you so desire. The game runs at a flawless 60 frames per second regardless of the crazy battles on the screen, highlighting the super smooth sprite art and detailed backgrounds Arc System Works does so well. 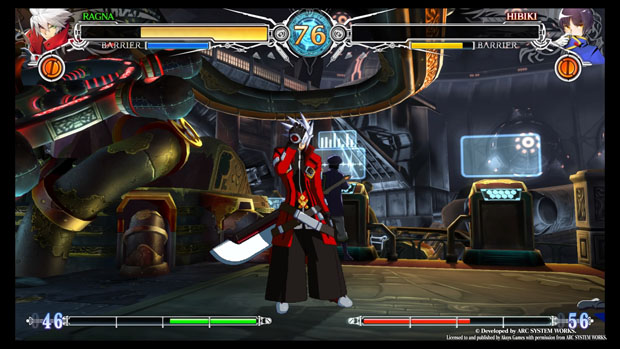 The crispness of the layered 2D backdrops and gorgeous character art really pops on the PS4, bringing the fighting to live with the vibrant colour design of the fighters and the effects that often fly around the field. Everything is kept clear to the players even in the most frantic action, and the locked framerate is so critical to the gameplay of an exacting fighting game like Blazblue.

Though new players shouldn’t feel totally put out. Blazblue Central Fiction keeps the excellent teaching tools of Chrono Phantasma, including character specific introductions and a challenge mode to push you to use the combos you learn. The stylish system has been overhauled from the previous game, now maintaining the language used in the more professional technical type, and allowing you to use combos and special moves in the same fashion as the technical type. Stylish now simply opens an SP button to shortcut to special attacks, as well as allow dial-a-combo with repeatedly striking a single button. It feels less like an alternate scheme now, and more of a small crutch for new players to fall back on while they learn the intricacies of fighting normally.

Many of the alternate modes return, mostly still variations on genre staples, such as score attack and time attack, that will really push the skills of advanced players. Arcade mode and versus of course, are expected, and the Grim of Abyss is a corruption of the Abyss mode from previous games. Adding the Grimoire system to the tower mode style gameplay, you’ll earn and level different grimoires as you descent through Kagushuchi. Leveling up yourself to equip more powerful grimoire to grant yourself further bonuses and special abilities to help you triumph. 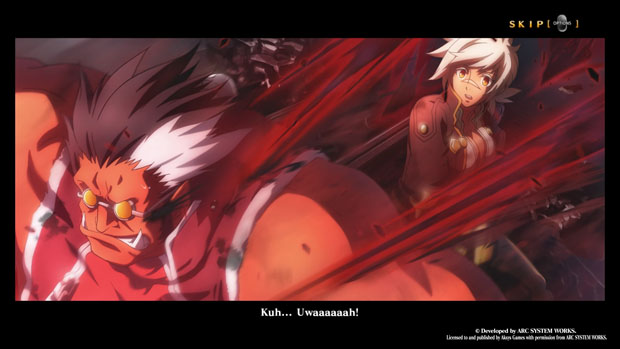 "Blazblue is probably most known for having one of the most involved story modes in the fighting genre, and Central Fiction aims to conclude the tale."

Blazblue is probably most known for having one of the most involved story modes in the fighting genre, and Central Fiction aims to conclude the tale. Unlike the usual glorified arcade mode of most fighting games, Blazblue’s ongoing narrative is a dense, character driven visual novel with the occasional one round fight. You will get lost on what’s happening, even if you’re roughly familiar with the series. Without spoiling actual story beats, it also leans awfully hard on the amnesia trope.

While not groundbreaking storytelling, I do have to commend it for restructuring the presentation. Instead of static portraits talking from fixed points within a window, they now move about the scene, changing expression and pose as well as visual angle, which helped keep interest in long segments. The main story path also has a tighter focus on a main cast too, allowing players to choose to delve into sub stories at their leisure, to flesh out supporting cast members and their struggles.

The writing competently manages to juggle tones from end-of-the-world serious to some lighter slice-of-life moments and some occasional sexual humour, which is par for the course in this series. The split of the main path and sub stories really made a huge pacing difference. Allowing the player to focus on keeping the story flowing made it far easier to sink into the world of Blazblue, whereas older titles tended to drag on with these side plots and lost interest. 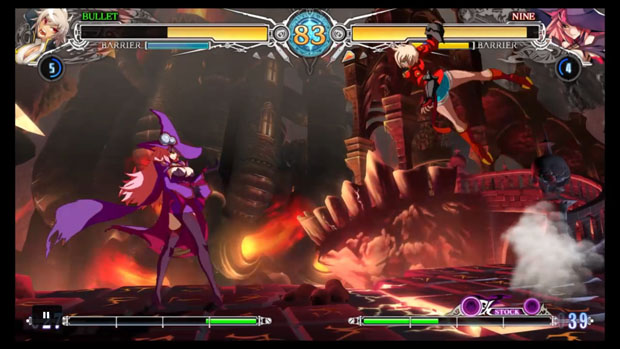 "the one sour spot on the presentation as a whole is the noticeable lack of an english dub."

One conspicuously missing element from the previous games that I felt was pretty important to new players is the lack of the “Teach me Miss Litchi” mode, present in the previous two entries to get players up to speed on the events of past titles and explain all the jargon used within the world of the game. They were fun little skits that showed a lighter side to some of the characters and helped new players not feel completely lost. While the structure of the story mode makes it less of an issue this time, I feel like it wouldn’t have hurt to include it either. The library, which features literally hundreds of entries is no replacement, with all the flavour of a Wiki page.

In fact, the one sour spot on the presentation as a whole is the noticeable lack of an English dub. Whereas I might have let a lack of English voice acting slide on a game of this caliber, the diverse cast that brought Blazblue’s heroes and villains to life through three games before has become nothing short of iconic for many fans. It didn’t destroy the immaculate fighting systems, and thus the ultimate point of the game. But I feel the game lost a certain charm by not finishing the saga with their English portrayals intact. 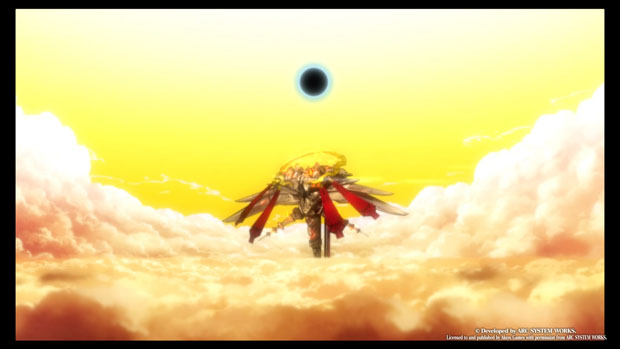 "some tweaks to the battle system and a few new characters also don’t quite make this overshadow Chrono Phantasma Extend, which also saw PS4 release."

Blazblue: Central Fiction isn’t getting out of here without a recommendation, but I do have some gripes about the content it is missing. The lack of English voiceover is a fairly minor irritant all things considered, and the presentation is the best its ever been. That said, some tweaks to the battle system and a few new characters also don’t quite make this overshadow Chrono Phantasma Extend, which also saw PS4 release.

Ark Sys’s usually gorgeous presentation has never looked better, Some great tweaks to an already great battle system, Stylish mode is less of a win button and more of a teaching aid for newcomers. Well told, if not revolutionary story mode has much better pacing due to tweaks, Keeps many great divergent gameplay modes to shake up the fighting.

No English VO is a really bummer, missing “Teach me Miss Litchi” to bring new players into the jargon and story, Only 5 new fighters.

Final Verdict:
AMAZING
Blazblue Central Fiction sits within a strange pocket for me of being so fantastic I can’t help but recommend it. But the trajectory of this series is pretty apparent at this point, and I can’t help but feel like you’ll get an even better experience with being introduced by the previous game and jumping on the re-release this game will inevitably receive. Still, the fighting engine is a work of art and that’s the core of the game. If you won’t be bothered by piecing together the story and no English voicover, you can’t go wrong.
A copy of this game was provided by Developer/Publisher/Distributor/PR Agency for review purposes. Click here to know more about our Reviews Policy.