Class-based arena multiplayer games are a dime a dozen these days. Ever since Overwatch exploded onto the scene in 2016, we’ve seen a plethora of (mostly unsuccessful) attempts to enter the genre. Bleeding Edge is the latest game to enter the arena of arena shooters, and while it offers a solid experience with lots of charm, it just doesn’t quite do enough to stand out from the pack.

When you start up Bleeding Edge for the first time, you’re thrown into a brief tutorial that runs you through the basic mechanics of the game. Each character has a main attack that is triggered with the X button, as well as three abilities triggered with B, Y, and the right bumper. A chargeable meter attack, kind of like your super in Destiny or an ultimate in Overwatch, is triggered with left bumper.

The controls, while fairly simple, never quite became intuitive; the layout is just so different from any other game like this, and it doesn’t feel like it makes the gameplay smoother. Still, the controls are simple enough, and they never change between characters, so once you do master them, you’re good for the rest of the game.

"The controls, while fairly simple, never quite became intuitive; the layout is just so different from any other game like this, and it doesn’t feel like it makes the gameplay smoother."

The different abilities are what define the characters, who are divided into three broad categories; DPS, Support, and Tank. The classes are fairly self-explanatory, and the game does a good job of making the characters within each class feel mechanically distinct from one another. Some of my personal favorites included Gizmo, an engineer who controls the battlefield with turrets and a long range machine gun; Miko, a combat healer with a really cool tribal aesthetic; and El Bastardo, a tank who lunges into battle with dual swords and a stunning ability.

There’s also Maeve, easily the most mechanically interesting; an elderly woman who can summon cages to trap foes in place, opening them up to devastating damage. The character list at launch is relatively small, but I actually think that’s a strength of the game. It allows each character to feel developed and distinct, and gives the team time to balance the roster. No one character feels noticeably better than the rest, at least not outside their specialized roles; roster balance is excellent here.

The characters are a huge part of the appeal of Bleeding Edge; the character designs ooze personality, and help carry the already vibrant, cell-shaded visuals. Each character has a distinct design, which makes them easy to spot on the battlefield, an important thing in any multiplayer shooter. The animations are crisp, and the levels are vibrant, with interesting and distinct locales; however, the maps are sometimes a weakness of the game.

There’s a relatively small number of them, and some maps are definitely better than others. They also have a tendency to rely on chokepoints at spots, funneling players down a couple of narrow pathways to an objective, resulting in matches that can sometimes feel like chaotic bloodbaths. Still, the maps are better more often than not; these faults are just something to be aware of. 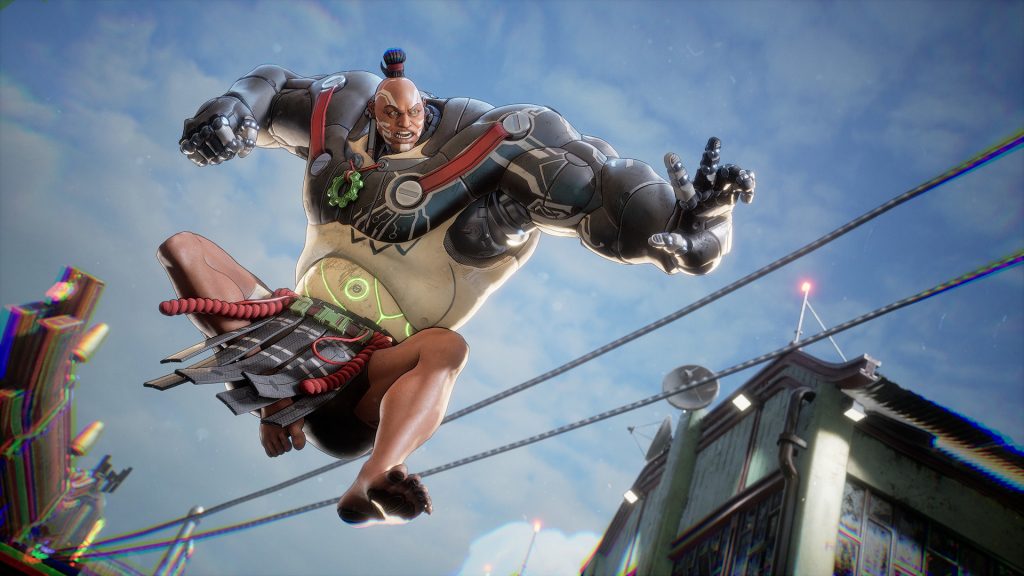 "The animations are crisp, and the levels are vibrant, with interesting and distinct locales; however, the maps are sometimes a weakness of the game."

The core gameplay of Bleeding Edge is fun, if fairly straightforward. Aside from the tutorial, which is fairly short, and a dojo mode, where you can practice with any character you want, against or alongside up to three AI controlled bots, the whole game revolves around its competitive multiplayer experience.

With nothing else on offer, the game relies heavily on it’s multiplayer maps and modes to carry the experience. It mostly succeeds, though once again, what’s on offer here is relatively limited. The game is split into two modes; an objective capture mode, and a collection mode. The objective capture mode is fairly straightforward; each map has a handful of control points.

Every so often, a random number of those zones will unlock, allowing teams to capture and hold them to earn points. After a period of time, the control points lock and become neutral, and then a different set of them open up. The locking an unlocking helps keep the gameplay fluid, and prevents matches from ever becoming a stalemate at one specific objective, which is a welcome change of pace from other similar games. 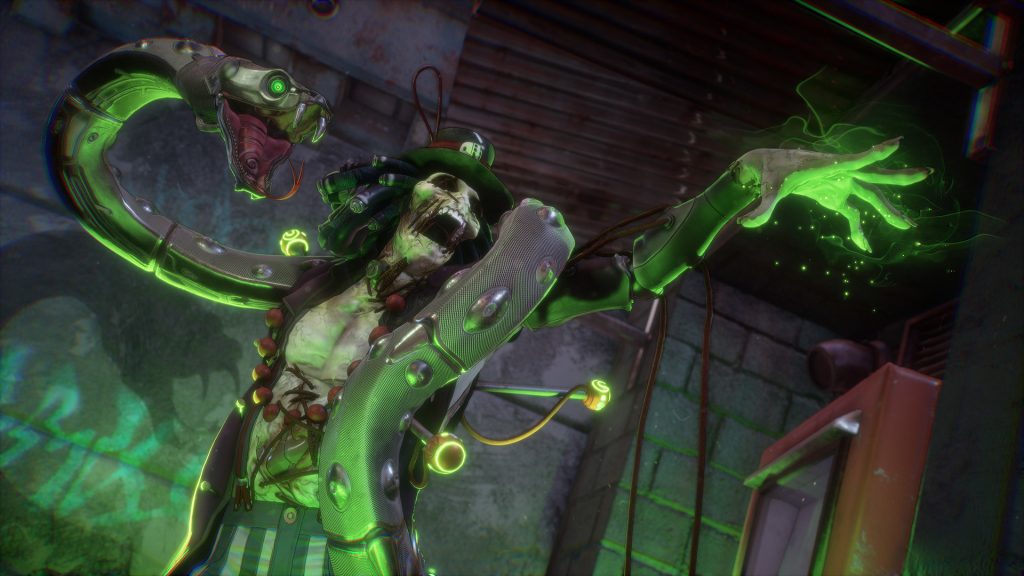 "With nothing else on offer, the game relies heavily on it’s multiplayer maps and modes to carry the experience."

The collection mode is similar; sets of crates spawn on the map, which can be destroyed to pick up power cells within them. When all the cells are collected, objectives appear on the map where teams can deposit their collected cells for points. The cycle then repeats; killed players drop any cells they were carrying, making them vulnerable to being acquired by the opposing team. The two modes are similar, but the specific dynamics of each one are varied enough to keep them interesting.

And this is both the biggest strength and biggest weakness of the game. Everything about it is so condensed; there’s only a handful of characters and maps, and only two modes. This allows the developers to fine tune each aspect, and has helped make the game a lot more balanced than many other entries in the genre. But it also results in a game where, unless you’re absolutely sold on it’s core gameplay, will start to wear thin fairly quickly. It doesn’t help either that the game has relatively little progression; levelling up unlocks you mods for different characters, and earns credits that can be used to purchase cosmetics.

This is cool, but the mods never felt terribly essential, and either way they were earned at random; you could spend hours grinding a certain character and not unlock mods for them. The cosmetics, meanwhile, were very limited; each character only had a couple of skins available for purchase, none of which looked all that distinct from each other, consisting mostly of just a color swap of what is otherwise the exact same costume. Once again, it results in a game very light in content, that grows rather same-y fairly quickly, unless you’re fully invested in the gameplay for its own sake. 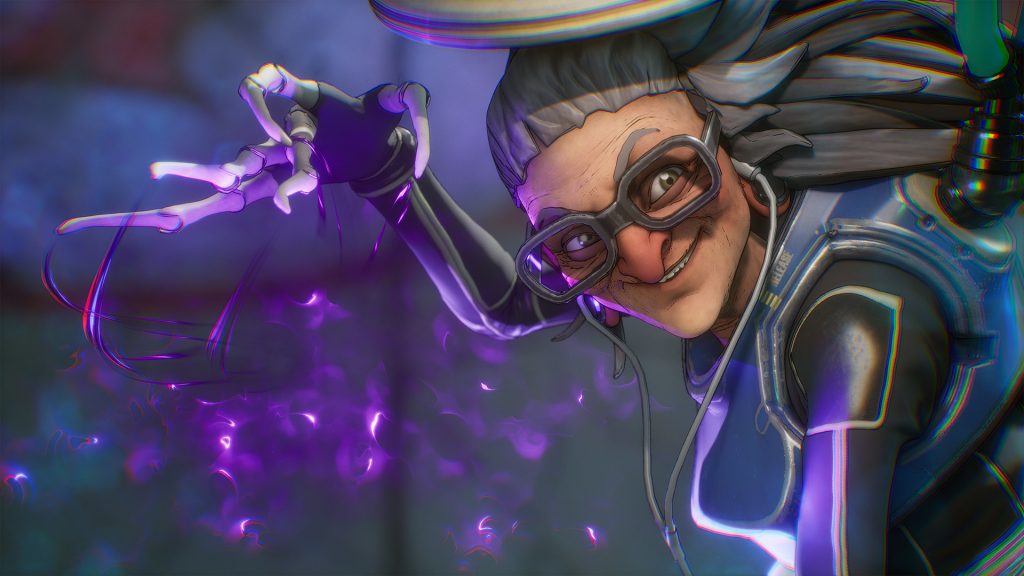 "I’m just not quite convinced that Bleeding Edge will successfully stand out from the pack. I hope I’m wrong, I really do, because there’s a lot to like about this game. "

And as a further consequence, the light content results in a game that feels like it lacks a distinct identity, or rather, a reason to be picked instead of it’s competition. It has a lot going for it under the surface; a better balanced roster than most other games in the genre, one that overflows with character and personality.

But on the surface, it appears to offer relatively little that couldn’t already be acquired elsewhere. In a genre as crowded as the class-based multiplayer shooter, standing out is vital for success; these games live and die by their play count. And I’m just not quite convinced that Bleeding Edge will successfully stand out from the pack.

I hope I’m wrong, I really do, because there’s a lot to like about this game. But a lack of a distinct personality, plus some light content at launch, may cause the game to have some problems retaining players, which will be a death sentence for this game. If you have any interest, I recommend giving it a shot; it’s really a solid entry into the genre. Just be aware of its shortcomings; the next couple of months will be critical in deciding the fate of Bleeding Edge. I hope it succeeds.

Eclectic, interesting cast of characters bring the game to life, as do vibrant visuals; a well-balanced roster helps keep the gameplay fun.

A lack of strong identity may hurt the game in the long run; the controls never quite become second nature.

Final Verdict:
GOOD
Bleeding Edge has a lot of charm and fun to offer, but doesn’t do a great job making a case for itself over other games in the genre; which may hurt it in the long run.
A copy of this game was provided by Developer/Publisher/Distributor/PR Agency for review purposes. Click here to know more about our Reviews Policy.