Bobby Kotick: Traditional Companies like Microsoft, Sony, EA “are going to really struggle in the future” 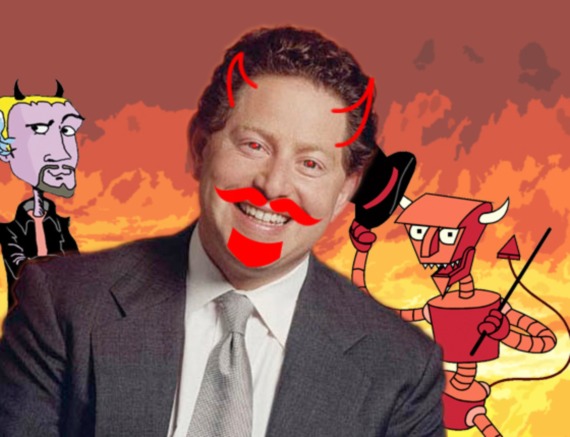 Activision boss Bobby Kotick says traditional console making companies such as Nintendo, Sony and Microsoft, will face a “struggle” trying to figure out an online dominance in the future, something which Activision has already supposedly done. Kotick recently said that because of Activision’s domincance over online, they no longer compete with “console dependant companies.” Strangely enough, he feels their greatest rival in the online space is Facebook.

“Our competitor online is Facebook in some respects. Even though they don’t create content, they provide it. There are a lot of new social gaming companies that are emerging and take mindshare – not from our consumer, because they’re a different demographic. But there’s the potential that some of the social games will start appealing to our consumers so we’re making a lot of investments in that area.

“But the traditional companies – the Electronic Arts, or Sony or Microsoft or Nintendo or Disney – that make console-based video games, are going to really struggle in future to figure out how to get into these online business we’re in today.”

He said that Activision’s merge with Vivendi has put the firm in a stronger positition, thanks to Blizzard, mainly. “It was why we sold control of our company to Vivendi,” he added. “We recognised that developing all of the capabilities that Blizzard had ourselves would probably put us in a place where we would have led to not only a decline in our operating margin, but no operating margin. We would invest billions of dollars in all this online capability – and likely actually not produce a great result.

“There was so much built-up expertise at Blizzard when we did this merger that we’re now applying to Call Of Duty, Tony Hawk, Guitar Hero that we otherwise wouldn’t have had access to. That puts us in a much better position than many of the very console-dependant companies we used to compete against.”