Whether by error or design, the newest maps set to release for Ghosts have been revealed.

A Twitter user recently received an email from Activision, providing information about the Season Pass for Infinity Ward’s Call of Duty: Ghosts. Perhaps unintentionally, the email led to the below image which detailed four map packs that would be provided via DLC with their names on top. 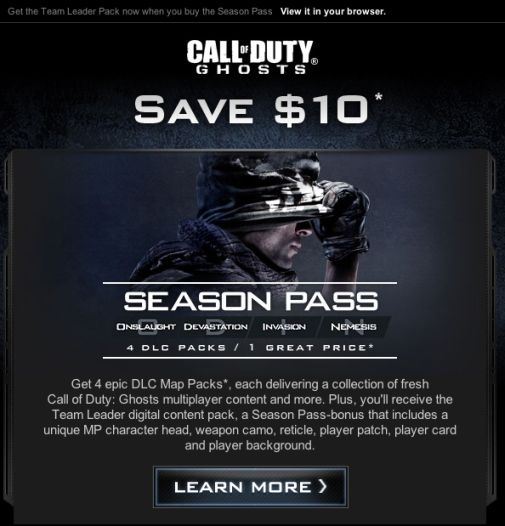 The map packs are: Onslaught, Devastation, Invasion and Nemesis, the first letter of each combining to spell the word ODIN. For those who’ve played the single-player, ODIN is an orbiting satellite that became a rather big headache for the Ghosts unit (and San Francisco). Activision has since removed the image, indicating that it was leaked by mistake.

Call of Duty: Ghosts will release on November 22nd for the Xbox One, and on November 29th for the PS4 in Europe. What are your thoughts on the same and will you be interested in picking up the DLC packs? Let us know in the comments below.