Four new multiplayer maps and a new Zombies chapter with aliens out now. 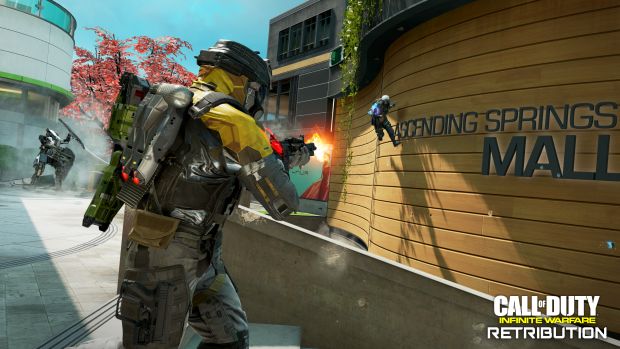 Having released last month on PlayStation 4 thanks to Activision’s timed exclusivity agreement with Sony, Call of Duty: Infinite Warfare’s final DLC Retribution is now out for Xbox One and PC.

The DLC brings four new multiplayer maps – Carnage, a race track set in a post-apocalyptic future; Heartland, reimagining of Warhawk from Call of Duty: Ghosts; Altitude, a futuristic shopping mall near the edge of the universe; and Depot 22, a three lane map set in and around a cantina.

For PvE players, there’s a new Zombies chapter called The Beast From Beyond. It brings new weapons, Zombie types, traps and other secrets to unearth. Interestingly, this Zombies map sees players battling the Cryptids from Call of Duty: Ghosts‘ Extinction mode before finally tackling the undead. New Achievements and Trophies are also ready and waiting to be unlocked.

There’s more Call of Duty goodness coming soon with Call of Duty: WW2 releasing on November 3rd for Xbox One, PS4 and PC.