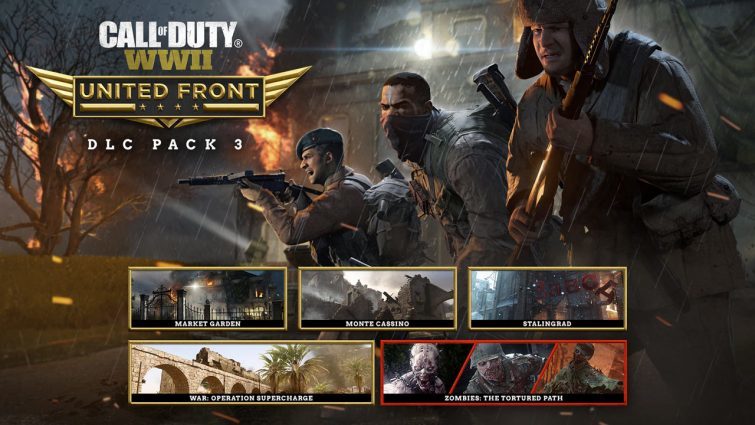 The third DLC pack for Treyarch’s Call of Duty: WW2 has been announced and it’s called United Front. Releasing on June 26th for PS4 players first, it brings three new multiplayer maps, a new mission for War mode and a new chapter for Nazi Zombies.

The maps include Market Garden, which is inspired by the same military operation; Monte Cassino, a “war torn village” with plenty of verticality; and Stalingrad, the famous battleground which has two main bases on either side of the city. The War mode mission is Operation Supercharge, which sees players dropping into Tunisia and fighting up to a Nazi-occupied village. Once its supplies have been captured, a bridge must be destroyed and “Axis fortifications” captured.

The new Nazi Zombies chapter is Tortured Path and sees players transporting the “remaining pieces of Emperor Barbarossa’s legendary sword to the edge of the world.” Or so we think. More details can be uncovered on the PlayStation Blog.

Call of Duty: WW2 – United Front should release a month after for Xbox One and PC players. While its price hasn’t been confirmed, it is included with the $50 Season Pass. Previous DLC packs also retailed for $15 each so expect this to follow the same pattern.