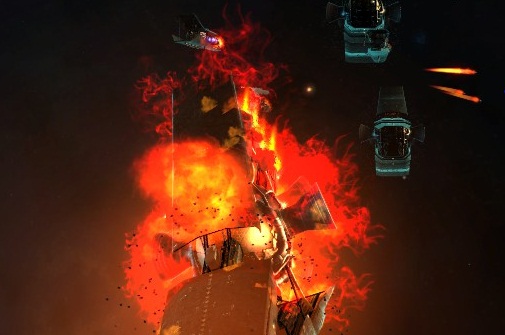 Welcome to Campfire Gaming, the weekly series of game journals. This week we have the third and final installment for the 4x indie game, Endless Space. Take a look at Part One here.

Ceasefires in Endless Space are required to last 10 turns at minimum. My ceasefire with the Horatio Empire lasted exactly 10 turns.

Now the war is back on.

Actually, it’s been back on for a long time. I’ve spent 100 turns grinding on in what’s essentially been a war of attrition. I’ve taken all but one of Horatio’s systems but they’re still able to field a descent fleet. With no other option, I eventually deliver the killing blow.

Now there is no Horatio Empire. They’re all dead.

This is Endless Space Part 3. 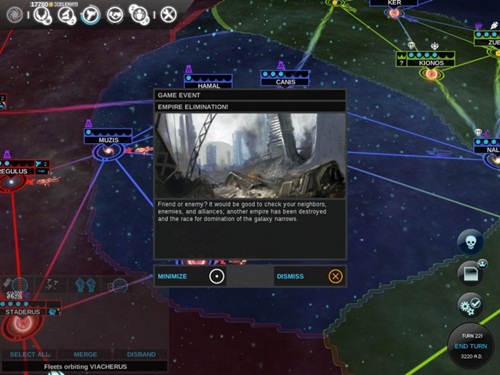 It weirdly doesn’t tell you exactly who is out of the game.

What I also don’t realize is the game will end after 300 turns, and I’ve spent far too long dicking around with Horatio. It’s beyond turn 200 and I’ve just now decided the victory condition I’m going for. I’m going to try to win an economic victory. The victory condition simply states that I have to have a certain amount of dust, the currency in Endless Space. It doesn’t say how much I need.

One key seems to be to raise happiness so that my citizens will be okay when I tax their asses into poverty. Right now, taxes in the Amoeba Empire are at 90 percent and the people are happy about it. I’m proud of this. I also sign a cooperative agreement with the humans, both the Pilgrims and the United Empire. Cooperative agreements, I don’t know, make more money somehow. I think it has to do with trade routes, which also aren’t very well explained.

I’ve spent so long dealing with Horatio that I’d lost track of what the others were doing. The United Empire (green) has essentially split the Cravers (blue) into two as they’ve been steadily at war for a long time. 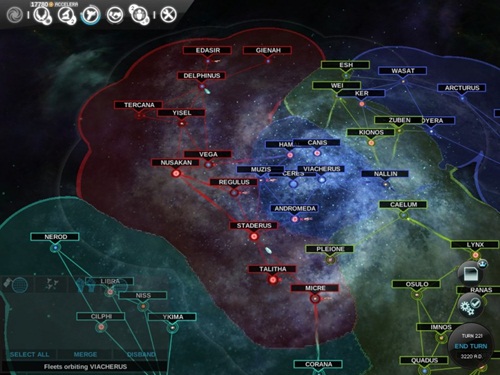 If you like lots of pictures of maps and graphs, you’re gonna love this edition of Campfire Gaming!

The Cravers, a race of bug people that have been making their way towards me recently, have finally arrived at my borders. The Cravers are the primary warmongers of the game, and they aren’t really capable of peaceful diplomacy. They use up a system’s resources much faster than other empires. After a while, the system will be ‘Depleted’, meaning it takes a permanent penalty to the amount of resources it gives. This encourages the Cravers to constantly expand to grab more land as their old land’s valuables deplete. It’s actually pretty awesome, but bad for me.

There’s already been several fights along the edge of our empires, and it’s probably a matter of time before war is declared. As a race of giant bug people, the Cravers aren’t all that interested in diplomacy. I decide to seek help in the form of the humans. I ask both human factions if they’d be interested in allying with a race of oversized amoebas.

The Pilgrims, the humans who escaped the United Empire, decline my invitation.

Much to my surprise and annoyance, the Cravers declare war not on me, but on the United Empire. I’m pulled into the fight as a result of the alliance. Not wanting to fight a war in my own territory, I quickly move ships into Craver space to the system of Ceres. That’s when I discover a big problem. The Craver ships use lasers. I don’t have any laser defense. The Craver ships have high missile defense. I use missiles. The battle for Ceres is predictable. 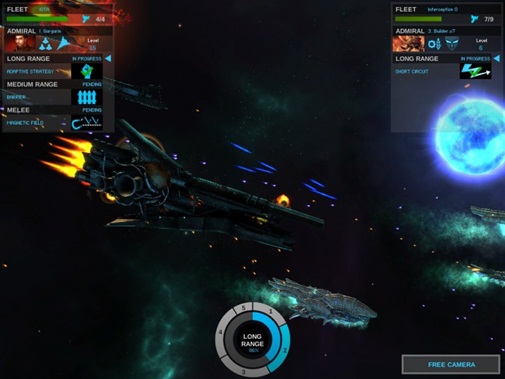 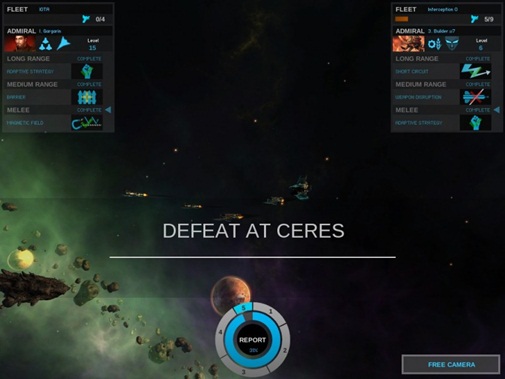 My research ability is pretty good, and I’m able to research shields (laser defense) quickly. I upgrade to a new type of ship called Black Death (and later, Black Death mark 2). It uses good old fashioned machine guns as its primary weapon and is loaded with shields. They also have a decent ability for system invasions. I reenter Ceres to make up for my previous defeat.

I win as decisively this time as I lost the last battle.

The Cravers are fighting a war on two fronts with me and my human allies, and they’re having a hard time adapting their ships to fight both of us at once. Soon they feel the pressure of the vice we’ve locked in and they begin to lose ground. By the time the war is over there’s only a single system left in the area. 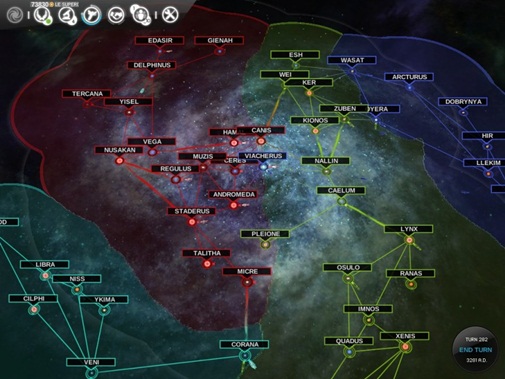 Finally, the Cravers have given up, and it’s time for me to reevaluate my plan.

My economic victory is still a ways off, and I realize I’m actually closer to getting a diplomatic victory (this seems odd because I’ve been at war pretty much the entire game, but whatever). I’m 69 percent of the way to a diplomatic victory. That’s when I notice the United Empire.

They’re 92 percent of the way to a diplomatic victory. In other words, they’re about to win the game. I immediately end the alliance and declare war on them. I spend all of my money on a gigantic military and send the armada to the humans.

I design a new ship called Syphilis specifically designed to destroy the humans. The great war between human and Amoeba for control of the galaxy is about to begin.  I attack several United Empire fleets and do some serious damage. I’m in the process of invading three enemy systems simultaneiously. I’ve swept into human territory and am laying waste to it without warning. Things are going well.

But it’s too late. The United Empire diplomatic score continues to rise, I guess due to peace with other factions. It’s turn 298, and they’re 98 percent to a diplomatic victory. Despite my sudden gigantic military buildup and invasion, I simply don’t have time.

The game ends and tells me I’ve lost. I assume the United Empire won with a diplomatic victory.

What I didn’t know is the game ends on points at turn 300. It takes the score of each faction based on military, economics, quantity and quality of systems, and other things and decides who won the game based on that.

The United Empire wins on points. 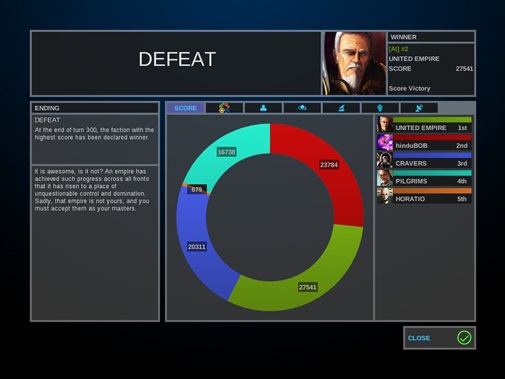 I take second place. The only statistic I was first in was military, which I was about to use to destroy humanity for good. Who knows. If I had more time maybe I could have won but I took too long to get my ass in gear. If I’d known it was going to end on turn 300 anyway I definitely would have committed to a war with the United Empire sooner, but somehow I missed that.

Humanity controls the vast majority of the galaxy, but the Amoebas carved out a nice chunk of outer space for themselves. This was my first Campfire Gaming loss. It’s a happy ending for the humans of Old Earth, but a sour defeat for amoebas large and small everywhere.

At least I have the satisfaction of knowing I completely eradicated the Horatio Empire. No one can take that away from me.

I’m Robert Green. Join us next week on Campfire Gaming as we play… I haven’t decided yet! If you have any suggestions of games you’d like to see in this feature, tell me in the comments or send an email to Robert at RobertGreenStories dot com. I’m a novelist and game journalist, responsible for the steampunk fantasy novel Magic Weapons. For more information about me and my work, head over to RobertGreenStories.com. See you next week!