This could be a very good thing indeed. 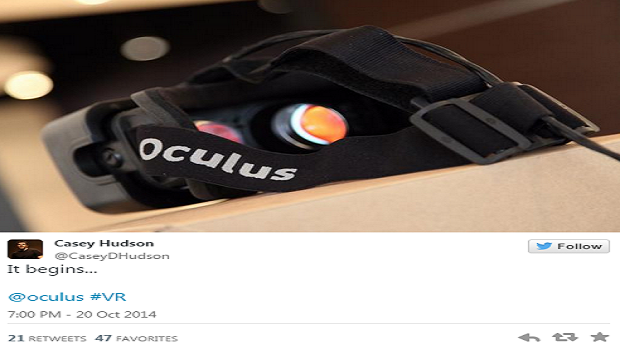 Casey Hudson, the man that directed the hugely acclaimed and deeply loved space opera role playing game series, Mass Effect revealed that he is now working on, or at least hinted at the possibility of working on the virtual reality headset, the Oculus Rift.

Casey posted an image to his Twitter feed that featured a picture of the Oculus Rift device itself and caption it “It Begins @oculus #VR”. Mr Hudson departed Bioware early this year in August and said that it’s time to “take on a new set of challenges”.

There are no official plans or ideas that have been made public by Hudson that are in any way related to the Rift device, but given the mans past works I’m fairly confident that he can do something awesome with the device. Let’s not forget that Oculus Rift was purchased by Facebook earlier in the year, so if there’s one thing you can be sure of, it’s that they aren’t lacking funds.