Check Out This Amazing ‘Cortana: A Holographic Mosaic’

Well known character from the Halo Franchise, Cortona has been given an interesting holographic mosaic from the talented guys at Mosaicbricks. At first look this does not like a proper depiction of Cortona and it looks an 8 – bit art from a distance. The idea behind this concept is not to match Cortona’s 3D model but to display the holographic effects that she possess in the game. The makers thought of many initial ideas like sculpting a lamp-like inner lit sculpture but they decided to go with a mosaic. The official website further describes the thought process behind Cortana: A Holographic Mosaic.

The holographic effect is created by rows of 1×1 round pieces and displaying them in front of a light source. “The initial concept is simple. Just like stained glass, we wanted to create an image where the light was coming from within, or in reality behind. So using thousands of trans clear, trans light blue, and trans dark blue 1×1’s, we built her image in a series of tall 1×1 stacked towers with differing combinations of these parts,” the website states. 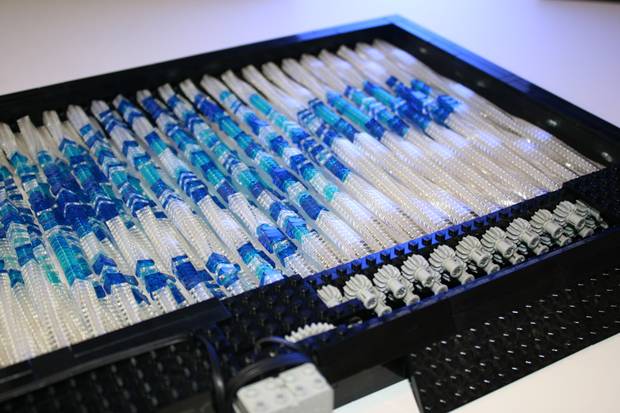 Looks awesome, right? Let us know in the comments section below. Via Kotaku and Mosaicbricks.