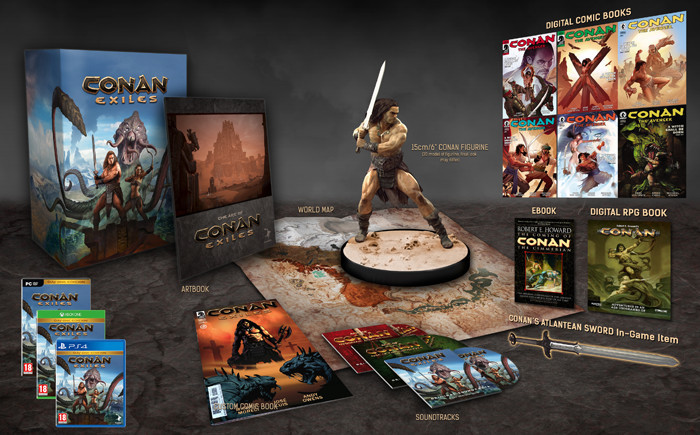 Funcom’s Conan Exiles, which is currently enjoying its stay in Steam Early Access and the Xbox Game Preview program, will be releasing on May 8th 2018. Along with Pc and Xbox One, it will also be available for PS4. To celebrate the announcement, a new trailer for the game has been released.

Conan Exiles features many of the hallmarks of an open world, online sandbox survival title such as construction, huge creatures to battle and a variety of environments to explore. Interestingly, the game will cost $30 when it launches on PC but $50 for PS4 and Xbox One.

Players can also expect a physical version of the game courtesy of Funcom’s partnership with Koch Media. If you pre-order the Day One Edition, you’ll receive a physical map and the Atlantean Sword for in-game use. Those interested can pick up the Conan Exiles Collector’s Edition which features a six-inch Conan figure, a comic book, various OSTs, the physical map, an artbook, the rule book for the Conan pen-and-paper game and digital comic for “A Witch Shall Be Born”.