On one hand, Concrete Genie is a beautiful game full of whimsical charm and clever use of art that really taps into the feeling of child-like wonder. On the other hand, its mechanically ambitious gameplay feels limited by its gaming medium, leaving players with less freedom to create than may seem apparent at first glance. But there’s no denying that developer Pixelopus has tapped into an intriguing idea, and though I ended my time with the game with some lingering feelings of disappointment, I was nevertheless endlessly drawn to its fantastical world and felt sad to see the credits roll.

Young teen artist, Ash, is the perpetual mark of a troop of bullies in the desolate seaside town of Denska. Our journey starts on a bleak day when the group runs across our hero quietly minding his business and subsequently steal the sketchbook he uses for drawing. Things quickly get out of control, leaving the book’s pages scattered about the town and prompting Ash to set out in an attempt to retrieve them. But in an interesting turn of events, he’s introduced to Luna, one of his paintings that has mysteriously become sentient and seems desperate to solve the case of why a purple substance is overtaking the town, and his quest expands well beyond his wildest dreams. 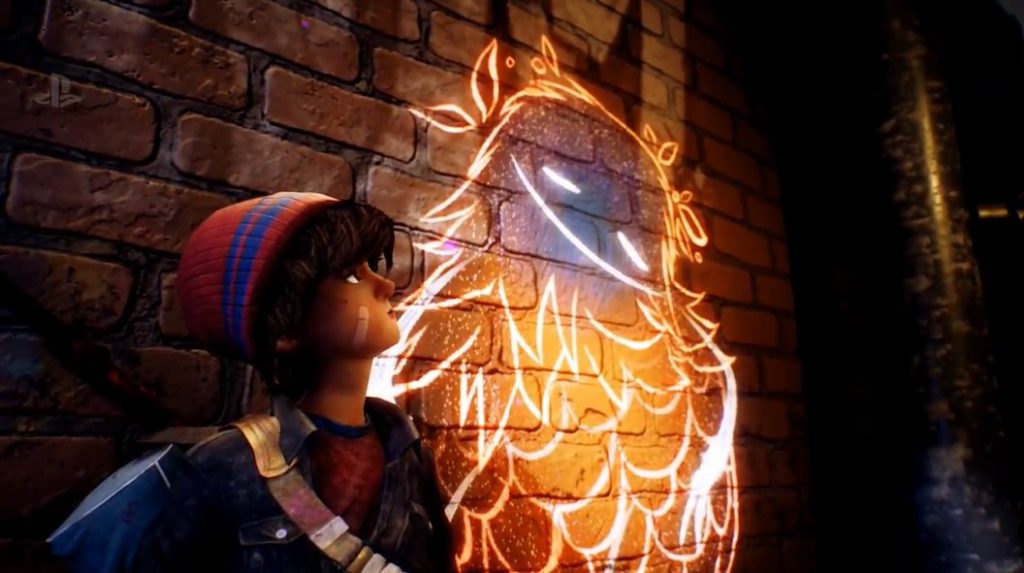 "Grass, trees, suns, rainbows – there are dozens of unique paintings to be found, and each of them have a use at some point in the game’s story."

Concrete Genie is a dark game both figuratively and literally. Its story deals maturely with the concepts of mental and physical bullying, coping mechanisms, and the looming threat of alienation from one’s peers. Meanwhile, Denska is an abandoned, dreary town full of fog and rain, lending a very real sense of dread to the game’s atmosphere. This gloomy aesthetic is far from unattractive though, leaning heavily on an art style reminiscent of games like Life is Strange and Tearaway to bolster its visual uniqueness. And though I never grew particularly attached to any of the cast besides Ash, their distinctive personalities are captured elegantly through the use of interesting facial animations that draw clear inspiration from stop-motion films.

Despite his ever-present feelings of estrangement, Ash is determined to bring Denska back to life with his colorful paint and the help of the titular painted genies that wander about the walls of the levels with you. Using a magical brush and the DualShock 4’s motion controls, you’ll paint a variety of items on the walls of the town in an attempt to turn on lights that hang along the rooftops. Grass, trees, suns, rainbows – there are dozens of unique paintings to be found, and each of them have a use at some point in the game’s story.

Painting vivid auroras and thunderous skies sounds enthralling in theory, but Concrete Genie ultimately presents a half-baked sense of creativity. You’ll collect loads of new things to paint and be given a plethora of blank canvases on which to paint them, but it doesn’t really mean much when you’re asked to repeatedly draw identical items dozens of times. And the game gives no incentive to paint the items with any feeling of creative vision since you can just slap it on a wall any old way and be successful. At least painting is a leisurely exercise since there’s never imposing danger that demands rapid completion, so you’ve got plenty of time to cover Denska with your lustrous paintings at your own pace.

The genies act as companions who require you to paint specific items to stay happy, and you’re given a bit of freedom to design them yourself using some of the pages you’ve found on your journey. More importantly, they possess the ability to perform tasks to aid you in your quest based on their color – red genies can burn red tarps, yellow genies use electricity to power switches, and blue genies blow wind to move objects for you. These unique characteristics give each of them tangible benefits, and some of the game’s environmental puzzles require the use of more than one type to solve. Plus, since a genie remains in your world well after they’re initially needed, your ranks grow exponentially over time to allow for plenty of playful interactivity and simple puzzle-solving.

When you’re not painting bright and colorful vistas on the town’s dilapidated buildings, you’ll spend a lot of your time climbing and navigating them. A lot of Concrete Genie takes place on rooftops as you track down a copious amount of scattered pages, newspapers, and collectible memories throughout Denska. Climbing is responsive and functions similar to games like Uncharted, acting as a compliment to the otherwise conventional platforming. An extremely basic stealth system allows you to make your way to a rooftop and call out to the wandering bullies to relocate them and provide you an opportunity to reach new spots. All of these gameplay elements are very rudimentary, but when combined, they keep the moment-to-moment gameplay feeling more involved than I initially expected.

Completionists will appreciate that Concrete Genie features a bevy of collection notes and trackers and an adequate map for finding its many optional collectibles. But even with that assistance, the game does a great job of hiding certain pages in trash cans or other inconspicuous places that require you to do some additional exploring to track them all down. Thankfully, each of the town’s districts feel distinctive, and most of them are interconnected in ways that allow for easy backtracking, so I never felt like I was wasting time wandering around the streets and rooftops in my pursuit of extras. 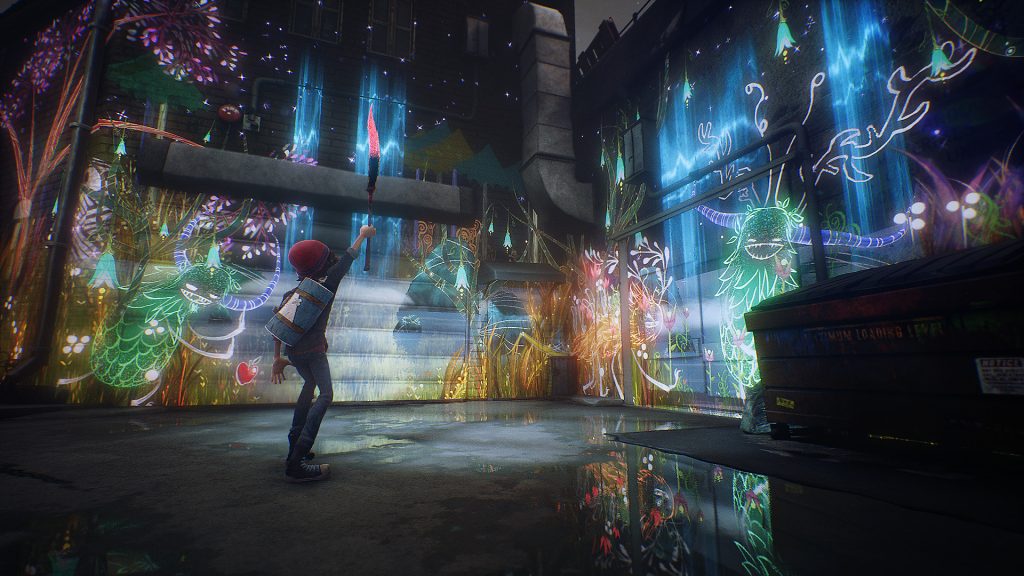 "A duo of included VR-only modes give Concrete Genie a bit of extra replay value for those seeking to get even more mileage out of the game."

A surprisingly violent turn in the back end of Concrete Genie comes out of nowhere to set up the endgame while also introducing an underwhelming and clunky combat mechanic that is otherwise absent from the first few acts of the game. During this final act, Ash also gains the ability to skate on paint, and while it’s fun to glide around the town quickly, it unfortunately doesn’t create any additional exploration opportunities. These new mechanics feel like an attempt to offer something more traditional to balance out the game’s creation-based aspects, but I couldn’t help but feel like they could’ve benefitted from being integrated into the game earlier with a more fleshed-out design.

A duo of included VR-only modes give Concrete Genie a bit of extra replay value for those seeking to get even more mileage out of the game. These modes take place in a first-person perspective with one offering objectives and another serving as an open-ended free paint mode. But regardless of your choice, you’re still not granted the freedom to paint anything you wish, relying solely on premade items that chosen from Ash’s sketchbook. Considering these modes require two PS Move controllers, it’s disappointing that we’re not given the option to create things from our own imaginations.

Concrete Genie never quite measures up to its own aspirations, and I would’ve loved to see what Pixelopus could’ve done with a bigger budget and some expanded mechanics. But after wrapping the game up in about 5 hours, I left Ash and his genies having experienced a pleasant afternoon of enchanted entertainment. In an age where so many games try to take themselves too seriously and value narrative over gameplay, Concrete Genie manages to successfully blend its dark undertones with lighthearted playfulness all while still remembering it’s a video game first and foremost. For that, it’s worth every penny.

Concrete Genie is held back slightly by its reluctance to trust us with more freedom of creation, and its third act combat feels somewhat out of place. Still, it still manages to do a wonderful job of giving players a reason to explore its eerie and beautiful town and interact with its colorful genies, and its narrative is successful in merging two very different tones to tell a tale that bounces admirably between somber and lighthearted.

A copy of this game was provided by developer/publisher for review purposes. Click here to know more about our Reviews Policy.
Tagged With: Concrete Genie, Pixelopus, ps4, sony