We speak to Compulsions Games' Sam Abbott about the upcoming indie platformer.

Contrast is one of those indie platformers that seemed obvious all along, but took the right amount of thinking to get to it. Like Portal, Contrast has you solving puzzles and “rooms” to progress. Unlike Portal, the game has you leaping from the third dimensions into the second dimension, effectively flattening your character into a shadow to traverse different obstacles. Simple to grasp, but a template for complexity.

We recently spoke to Sam Abbott over at developer Compulsion Games to get his take on a variety of things, including the influences for Contrast, what inspired the game, Sony’s indie approach – along with why the game won’t be coming to the Xbox One – and much more.

Ravi Sinha: The idea for Contrast is certainly amazing. What served as the inspiration and how did you further develop on the idea?

Sam Abbott: Thanks! While Contrast has been inspired by a number of different games, the initial spark came from Portal. Guillaume (our studio head) was really interested in how Portal changed how you could move through space. While sitting in a café one morning, he began to wonder what it would be like if the shadows of objects in games were all physicalized. One prototype later, and Contrast was born.

Once he had the initial idea, one of the main factors that changed how Contrast developed was competition. In particular, Lost in Shadow and Shadow Physics were both announced, two games that also used shadows as part of the gameplay (Shadow Physics in particular had a very similar mechanic to Contrast). Contrast needed to become more than just a shadow game – we needed something unique, and more than just a mechanic. While Shadow Physics was eventually cancelled, the world of Contrast grew into what you see today.

Ravi Sinha: What is the technology driving Contrast? How much effort did it take to accurately model light sources and shadows for the “2D” platforming segment?

Sam Abbott: Contrast is made using a heavily modified version of Unreal Engine 3. We created new rendering and shadow physics engines (to allow the 2D/3D shifting) to replace some of the stock components of UE3 (surprisingly, it didn’t have shadow shifting tech built in).

The tech was not too difficult to create, but creating levels was not easy. The shadows in 2D are all created by the combination of the light sources and objects in the 3D space – so if you move an object in 3D, it will change the shadow in 2D, and change your platforming environment. It took time to figure out a design process that worked, because at the beginning, our paper designs made little to no sense in the game world.

"The tech was not too difficult to create, but creating levels was not easy. The shadows in 2D are all created by the combination of the light sources and objects in the 3D space."

Ravi Sinha: Contrast’s puzzle mechanics seem to be inspired by Portal, in terms of setting up rooms to jump through. One of the more dynamic moments we’ve heard about is jumping across the shadows of two individuals arguing. Could you outline some other such moments?

Sam Abbott: We could, but we were hoping that players would find them out for themselves. Having said that, creating a variety of experiences inside Contrast was a goal of ours – we didn’t want the player to be doing the same thing over and over again.

Ravi Sinha: What influenced the decision to go with a Vaudeville setting for Contrast? How much more effective was the narrative in this setting?

Sam Abbott: Contrast has vaudevillian influences because we find performance arts really interesting. We loved the idea of including aspects of vaudeville, like a circus, travelling performers, burlesque, and illusions. Vaudeville allows us a huge range of potential characters and locations, which is one of the benefits of a rich setting.

The narrative was largely designed around these themes, so it probably wouldn’t have worked so well in another universe. Unless, of course, you guys want to play a game about a little girl set in 34th century New New York, with a cabaret singing robot mother, and shifty alien Dad (in which case, we’ll get right on that). 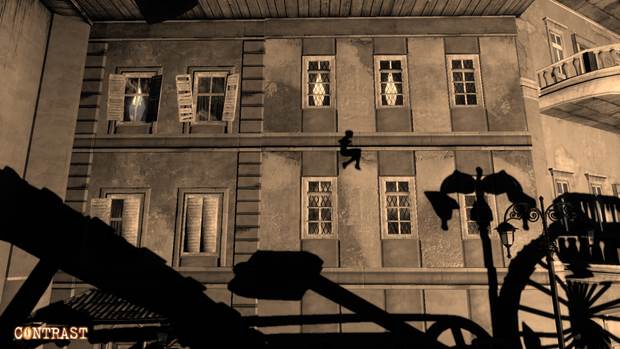 Ravi Sinha: How long will Contrast be? Will it have puzzle rooms or additional content like Portal?

Sam Abbott: Roughly 4-5 hours. Contrast allows a bit more exploration than Portal, and while we’d like to enable additional content (perhaps through Steam Workshop), it’s not something we’re actively pursuing. We may look at DLC too, if our fans are particularly interested in new content from us.

"Contrast has vaudevillian influences because we find performance arts really interesting. We loved the idea of including aspects of vaudeville, like a circus, travelling performers, burlesque, and illusions."

Ravi Sinha: There is the market for big-budget, action-heavy titles like Call of Duty and Battlefield, but also a strong market for titles like Minecraft, Limbo and even Portal. What are your thoughts on this “contrast” between the gaming industry today, where middle-tier titles seem all but extinct?

Sam Abbott: I think we’re rebuilding the “middle tier” right now!  Minecraft, Limbo and Portal are all examples of this, in my opinion – games that hone their vision, and create wonderful experiences that aren’t huge in scope, but are still ambitious. It’s a bit hard to generalize (or answer this quickly!), but I see roughly three tiers – small indie shops creating games like FTL, small to medium sized studios that create games like Limbo or Minecraft, and then the big guys.

I think there’s an important place for that middle tier – a place where you can take creative risks (it’s very hard to take major risks at AAA level), but think bigger than a retro platformer, while somehow keeping the game you create personal. It’s a very exciting time, in my opinion.

Ravi Sinha: So far Contrast is confirmed to release on the PS4, PS3, Xbox 360 and PC, but not on Xbox One. Is there a particular reason for the same and can we expect an Xbox One version down the line?

Sam Abbott: Microsoft currently isn’t letting indies self-publish, so we’re holding out for the moment in the hopes that they reverse their positions. Development kits are also more difficult to gain access to this early in the game.We’re hoping that will change at some point soon! 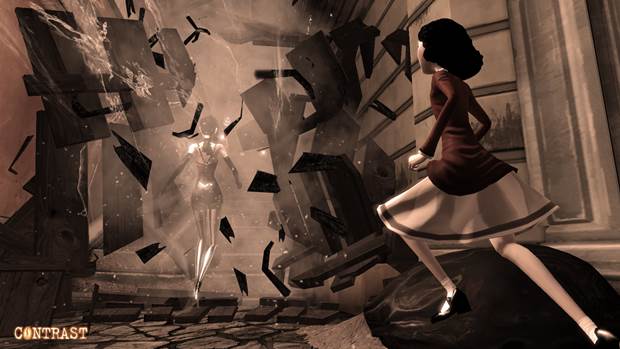 Ravi Sinha: Can you please talk a bit about the PS4 version of Contrast? How does the PS4’s unified architecture and 8GB of RAM help bring Contrast to life?

Sam Abbott: Haha, well, it makes it really easy to get onto their platform! There is so much memory and so many cores on that machine we’re still scratching our head as to what to do with all of them.

Ravi Sinha: There is a lot of talk about how game development will be easier on the PS4. So as someone who is working on both i.e. a PC and PS4, do you think it is as easy as picking up the PC code and paste it to the PS4?

Sam Abbott: It’s definitely a lot easier than on the previous generation of consoles where the architecture was much more divergent from PCs, but it’s also not as simple as cut & paste.Once the industry has had a few months to iron out its kinks, it should be much easier to develop for the PS4 than for the PS3.

"I think we’re rebuilding the “middle tier” right now! Minecraft, Limbo and Portal are all examples of this, in my opinion – games that hone their vision, and create wonderful experiences that aren’t huge in scope, but are still ambitious."

Ravi Sinha: Based on the short teaser we’ve seen, if Contrast were to run on, say, the PlayStation 4, what would be the difference compared to it running on PC in terms of gameplay features and graphics?

Sam Abbott: Naturally, the PS4 is very powerful, so we can turn on a bunch of graphical features to make it look very nice. However, there should be very little difference between the PS4 and a high end PC. Contrast looks fantastic on both platforms right now, and we’re excited to share how it’s looking with people soon.

Ravi Sinha: What are your thoughts on the current state of the indie games industry, especially concerning the lack of self-publishing on the Xbox One for indies and the strong push by Sony for the same on the PS4?

Sam Abbott: Well, it’s certainly the topic of the moment in the indie community right now. The community is still growing, and the culture is wonderfully supportive, collaborative and encouraging. While there are elements of competition, there is a huge explosion of ideas and feedback, and I think gaming is better off because of it. The diversity of the games being produced is just astounding, and we’re seeing more and more devs applying for things like the Indie Megabooth at PAX. And, in terms of general gamer culture, appreciation for indies is growing, which is super great.

So the Xbox One situation is a big disappointment for indies given how well other parts of the community are going, and to be honest, it’s a bit of a surprise. I’m sure Microsoft is still figuring out what it wants to do, but it’s a real shame that they don’t want to join the party just yet.

Ravi Sinha: When can we expect to see Contrast release?

Sam Abbott: Q4 2013! We’ve kept things pretty close to our chest in the dev process, so we’re really excited to be approaching release. Who knows, maybe we’ve even got a new trailer just over the horizon.