A deep dive into the tech behind Beenox’s recreation of the classic kart racer.

When you think about, Naughty Dog isn’t exactly the most appropriate name for a studio that’s brought us The Last of Us and the Uncharted series, perhaps the closest the genre’s come to the spectacle of blockbuster Hollywood movies. But look a bit further back into their history and you’d see why the name is apt. Before they became famous for bringing Indiana Jones’ Gen X grand-nephew to the smallish screen, our canine companions were better known for the Crash Bandicoot series, the closest Sony’s ever gotten to an iconic mainstream video game character your mum would know about.

The mainline Crash Bandicoot games were your typical late-90s platformers. Vicarious Visions, an Activision studio, brought these back to life for newer audiences with the exceptional Crash Bandicoot N.Sane Trilogy. The leap from fifth-gen to eighth-gen visuals was spectacular but what made the trilogy truly worthwhile was how it stuck doggedly to the original’s level design. It didn’t feel like playing an eighth-gen Crash game. Instead, it preserved the wonder of having played the original. (Well, to be honest, I wouldn’t know since I was a year old when the first Crash game came out). The N.Sane Trilogy brought attention back to this classic series. After 2008’s Crash outing, Mind Over Mutant, received mixed reviews, the series was put on hold for nearly a decade.

But with a new audience having experienced Crash for the first time, Activision’s evidently seen money to be made. This is where Crash Team Racing Nitro-Fueled comes into picture. Video game spinoffs have had a rather sketchy history, but one spinoff genre that’s always done well is kart racing. And just like Mario and Sonic have their kart racing games, Crash Team Racing was Naughty Dog’s 1998 take on the genre. This was a spectacularly under-appreciated game, having arrived during peak Mario Kart, with Mario Kart 64 making waves, and the Double Dash just a few years away. While it sold well enough—and cemented Naughty Dog’s position as a key Playstation studio—Crash Team Racing never quite received the attention it deserved. But with the spotlight focused on Crash these days, what better way to reintroduce this underappreciated racer than a full-on remaster?

Vicarious Visions, the developers of the N Sane Trilogy aren’t at the helm of Crash Team Racing Nitro-Fueled (which we’re henceforth referring to as Nitro-Fueled because, seriously, that’s a mouthful.) Instead, Beenox—another studio in the Activision stable—helmed development. Today, we’re going to take a deep dive into the technical underpinnings of the Nitro-Fueled, how it stands up to the original, and how it scales across different platforms.

Nitro-Fueled is built on Beenox’s in-house engine. We’ve certainly seen better visuals in mainstream AAA titles but keep in mind that Nitro-Fueled’s aim isn’t to push the limits, but rather to reintroduce a classic late-90s kart racer on newer hardware. A deferred rendering solution for lighting brings with it the most noticeable change—compared to the 1999 original, most light-sources are dynamic and, together with generous use of bloom lighting, Nitro-Fueled manages to capture the aesthetic of a CGI movie. Texture work and material rendering is, well, generations ahead, and holds up well on higher resolution displays. Physically-based materials aren’t in use here. This is understandable, considering the aesthetic Beenox is aiming for. This is a racing game, and as such, conveying the sense of motion is very important. We’re a little miffed by Beenox’s decision to go with a locked 30 FPS update on all platforms—Mario Kart on the Switch runs at 60. However, the heavy use of post-process effects, particularly the per-object motion blur mean that Nitro-Fueled still manages to convey that sense of motion very well.

The post-process pipeline in Nitro-Fueled is worth talking about: It plays a big role in bringing out the game’s filmic sensibility. The per-object motion blur implementation is, as we’d mentioned, important in conveying motion even at 30 FPS. Meanwhile, we see effective use of ambient occlusion, with foliage and other incident objects receiving indirect shading. We’re ordinarily not big fans of heavy bloom effects but in Nitro-Fueled, bloom lighting helps bring out that cartoon aesthetic. A temporal AA solution appears to be in use. This smoothens thing out but softens the image considerable—again, not an issue considering the target aesthetic.

Moreover, the conservative framerate allows Nitro-Fueled to hit very consistent levels of performance across PS4 Pro and Xbox One X. Whether it’s the PS4 or the Xbox One X, our testing indicates that Nitro-Fueled doggedly sticks to that 30 FPS target. 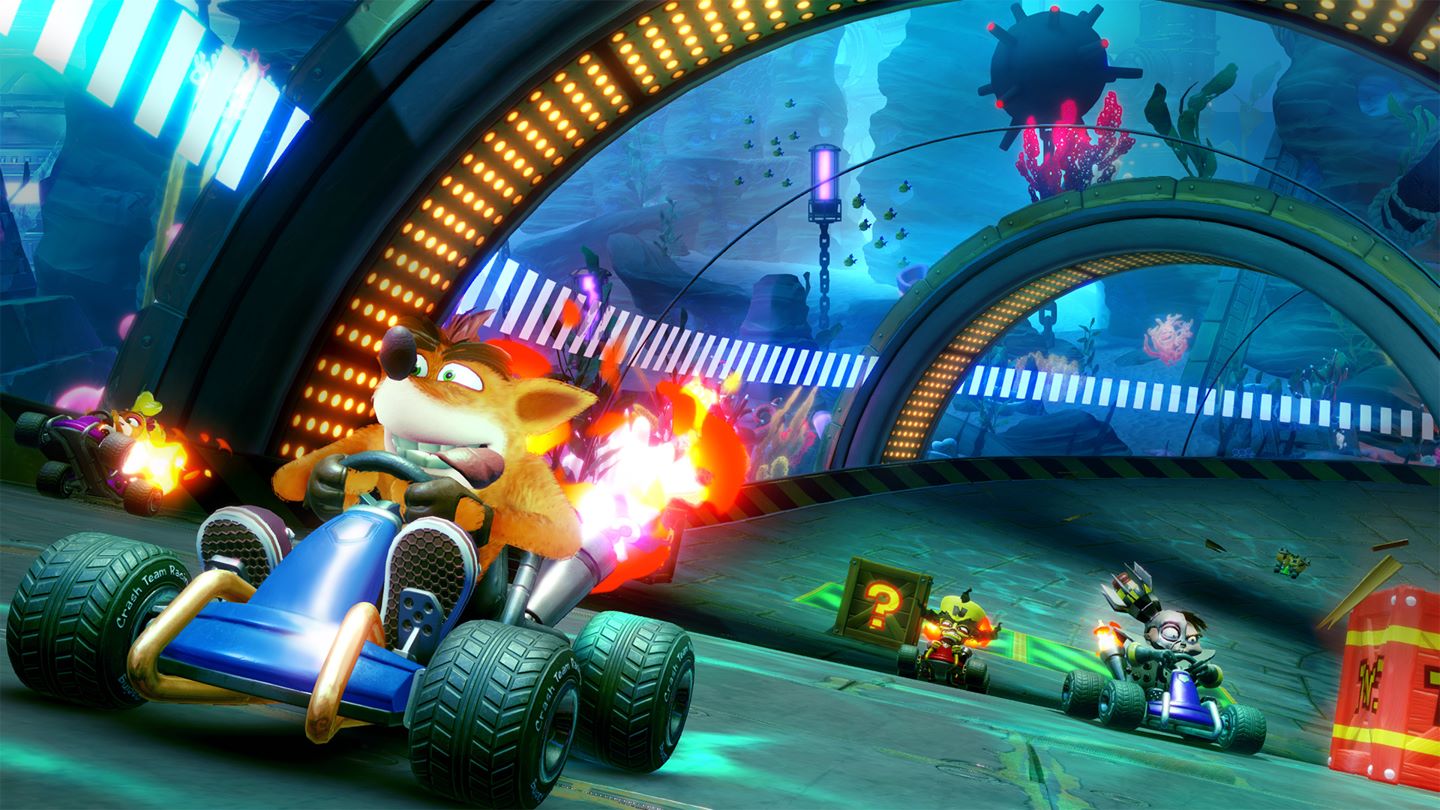 Geometric complexity is orders of magnitude beyond the original—individual models in Nitro-Fueled use more polys than are present on the entire stage in the original. What’s striking, though, is that despite the massively improved polygon count, the maps are still very recognizable, with objects being placed exactly where they were per stage in relation to the original. This contributes significantly to the general feeling of discovery because the maps are “just right,” on a turn-by-turn basis.

Tessellation is another big enhancement. Terrain tessellation has been around for quite some time—even 2012’s Battlefield 3 utilized it. It enhances the geometric complexity of the ground surface to add in physically-accurate dips, bumps, and rock formations. The use of terrain tessellation is fairly subtle in Nitro-Fueled but, nevertheless, there is a noticeable difference when it comes to the racetrack floor. For instance, the tiled flooring on the temple levels have appreciable depth and separation. This is a nice quality of life improvement and while it’s not likely something you’ll be focusing on when hurtling across said track, it’s one of those subtle improvements you’d only notice if it was removed. 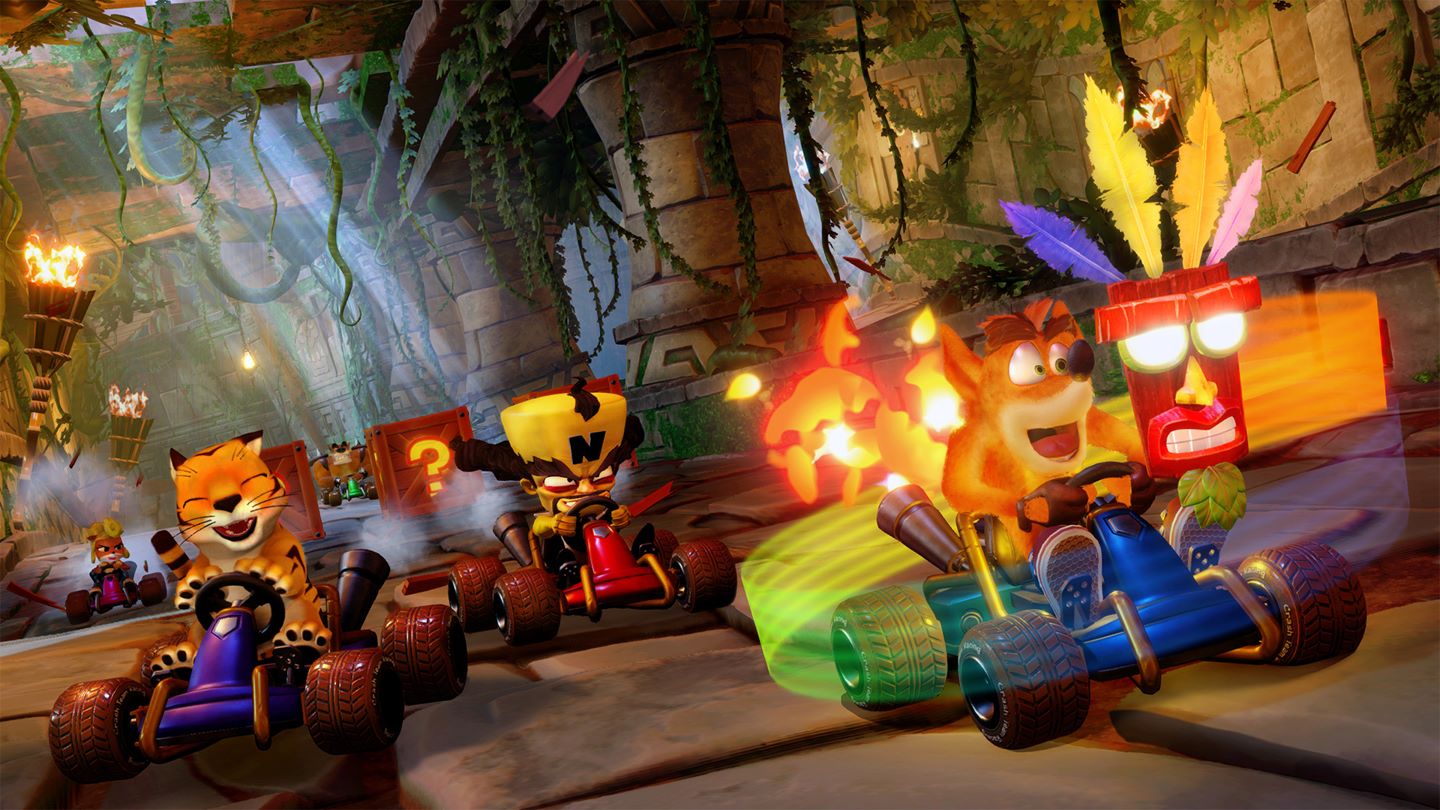 On the console front, we analyzed the game’s performance by taking some sample scenes from the game and running it through trdrop, an open source software. Note that this tool gives us a mere demonstration of the game’s performance, because an exact 1:1 representation of performance can only be provided by the developers themselves since they have access to vast of array of tools and profilers.

What’s surprising—and somewhat disappointing at the top end—is the level of platform parity Nitro-Fueled manages to achieve. Both the PS4 Pro and Xbox One X hand in identical experiences: it’s 30 FPS all the way on PS4 Pro and Xbox One X. Nitro-Fueled is also available on the Switch but, as a full-priced game, it’s a much tougher sell on Nintendo’s platform. The visual cutbacks aren’t enormous—there’s a drop in resolution to 720p and what appears to be a lower poly count on geometry. The Switch version also features slightly more aggressive LOD scaling and a noticeable cutback to ambient occlusion. However, the biggest issue is precisely that 30 FPS update we’d talked about earlier. Mario Kart on the switch hands in identical quality (albeit with simpler visuals), but is just a smoother overall experience at 60 FPS. 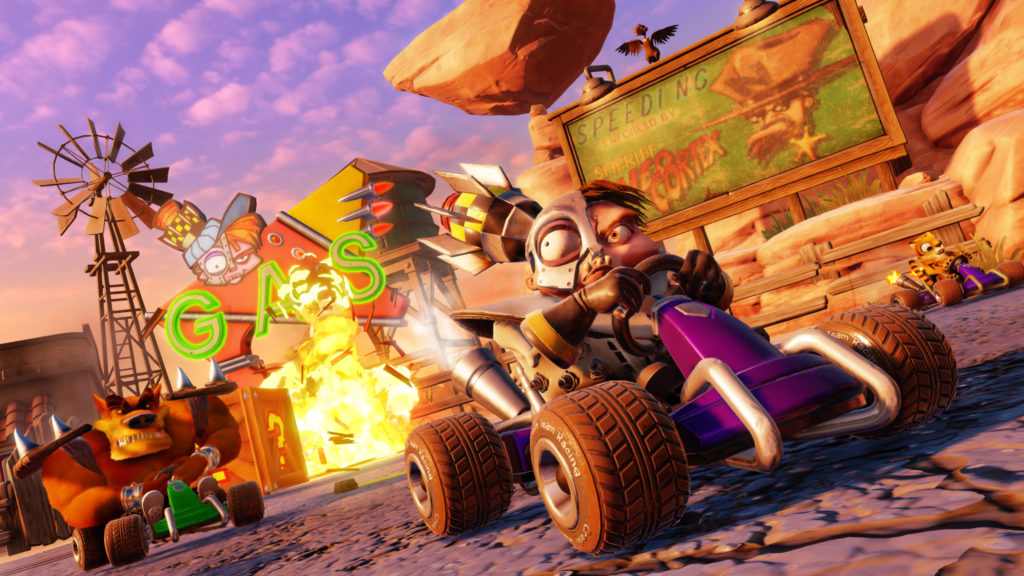 On the enhanced consoles, the game tops out at 1440p resolution on both. We can’t be sure if this is down to CPU-side bottlenecking, though that is a distinct possibility (An example: Alien: Isolation easily runs at 60 FPS on a PC with a PS4-equivalent GPU and a decent processor while the game only hits 30 on the PS4 itself). While the 1440p presentation is acceptable on 4K monitors—the soft, aliasing-free presentation helps—we did feel that this was a missed opportunity: A 60 FPS mode running at a lower resolution would’ve made the gameplay meaningfully better on the consoles. And we’re also not sure why the One X wasn’t handing in a higher resolution output, even at 30 FPS. While the Pro and Xbox One X operate at the same framerate and resolution, there were subtle difference in visuals. Shadow quality is slightly pared back on the Pro—the One X has noticeably enhanced coverage. Tessellation quality is also higher on the One X—terrain geometry is smoother and more realistic coarse. However, these are very subtle changes and almost impossible to notice while in motion. We’d have much preferred slightly pared back visuals and even a lower-res output in exchange for a 60 FPS option. 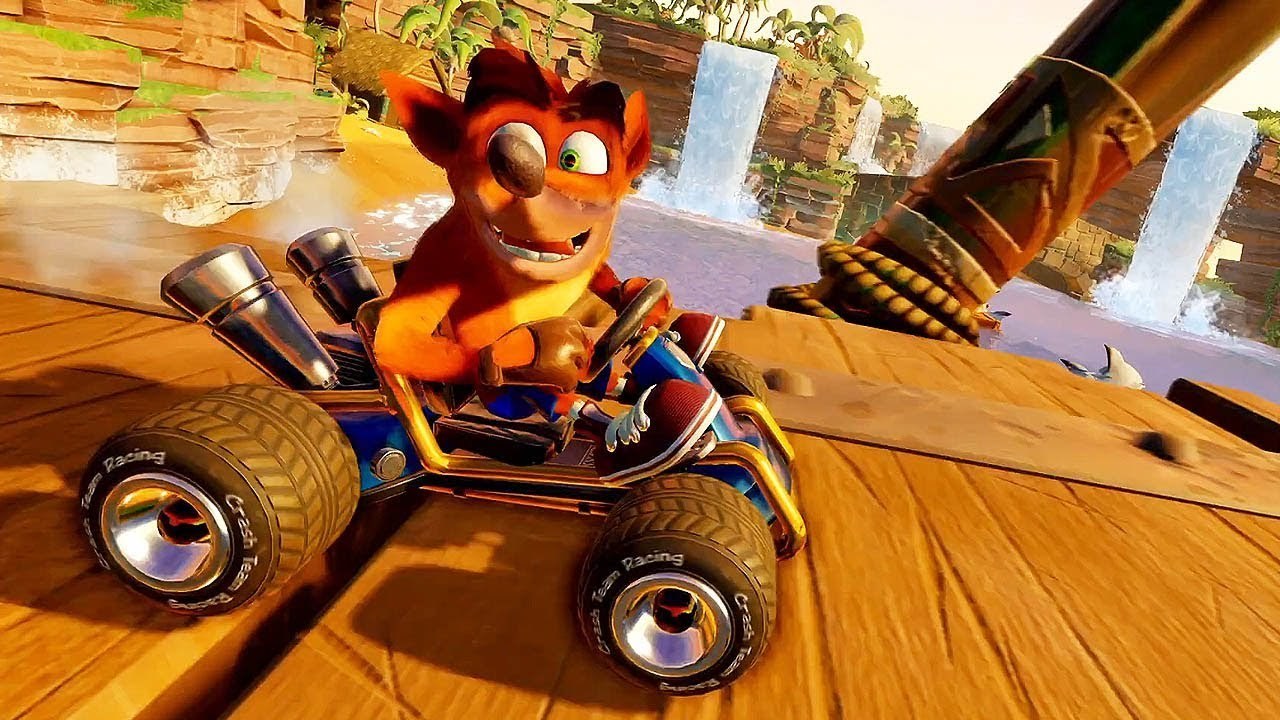 The Crash Bandicoot series is most certainly making a comeback. While we’ve yet to receive official confirmation, the rumour mill’s been buzzing about a new mainline entry for the past year or so. In the meanwhile, the N.Sane Trilogy and now Nitro-Fueled are a great way to familiarize a new audience with Sony’s late-90s mascot. And to be honest, Nitro-Fueled is more than that: It’s a great kart racing game all by itself and a testament to just how well Naughty Dog’s level design holds up even 20 years later.