Worth buying? Of course it is.

Gangnam Style has been a phenomenon so far with the video becoming the most watched video ever on YouTube and will probably reach 1 billion page views before this year ends. It has the most hummable tune with people from mostly all countries appreciating it and it has no doubt become a cultural phenomenon.

South Korean Singer PSY has made a ton of money from YouTube revenue and licensing, and one of such licensing agreements brings the song to Dance Central 3–an Xbox 360 exclusive game that not only has been critically acclaimed but also is loved by plenty of people.

So how is it, exactly? We’ve already talked about Kinect tracking in the main game in our review, which said: “These games have always been ones that take advantage of the Kinect sensor and this ones does the same. Dance Central 3 works exceptionally well with the Kinect sensor and is a game that has been built ground up for it. You can pull off a variety of moves all with flawless accuracy provided you set up your TV properly.”

Usually with games such as these it’s down to user errors by not placing the Kinect sensor in an optimal environment and that reduces the tracking efficiency a bit, and considering I didn’t have much problems with the sensor I was eager to try out this DLC and see what it feels like dancing to this amazing song and choreographing its moves.

For starters, the game teaches you slowly, move by move, and doesn’t make you rush a lot and memorise patterns fast. It’s a strenuous dancing routing, only recommended for people who are fit and not obese. Now you don’t want a heart attack by performing this song like one guy did so make sure you have plenty of space in our house and you can actually attempt this properly.

The song is choreographed very well and syncs with what the singer does in real life, which is a testament to how accurate and homage worthy this DLC is. The moves are not complex like some of the vanilla songs found in the game, but they are just strenuous to perform, however, it will take a little bit of time to master the complete song for you to perform anywhere because the moves are so random and not something you’ve seen people do before. 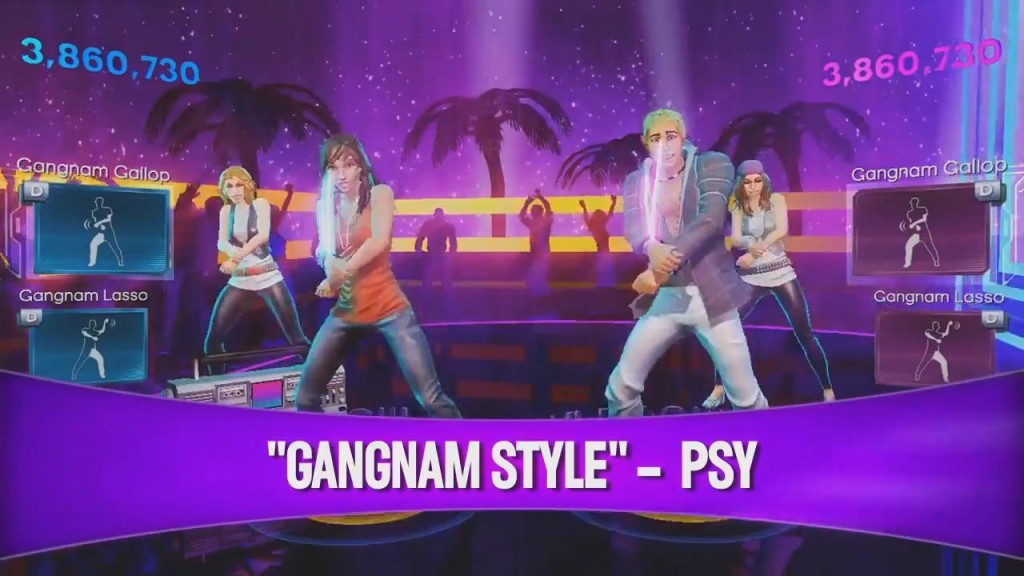 The characters are decently recreated in the game but don’t really have the charisma of PSY, but that’s expected it’s a video game after all. The game ranks you based on your moves and as mentioned before the tracking is pretty accurate and all you have to do is do the dancing part correctly and a little error is fine too because it is a bit forgiving.

This is a good song to perform if you have as bunch of guests at your house because the Kinect will pick them up easily provided you have a lot of space of course. This is a much recommenced DLC that complements the main game very well.