By now nearly all of you must have seen, or at least heard about, the reveal trailer for Dead Island – the haunting video about a family getaway that goes bad. Really bad! Happy, smiling faces quickly fade as their vacation turns into the holiday from hell, with our protagonists trying their damndest to escape a ravenous zombie horde. The music was poignant, the storyboard memorable and the conclusion as gloomy as they come.

Everyone jumped on the hype bandwagon and waited with baited breath for the release of the full game but was it worth it? Could Deep Silver and Techland deliver a game that proved as atmospheric as it did harrowing, and fun yet disturbing? 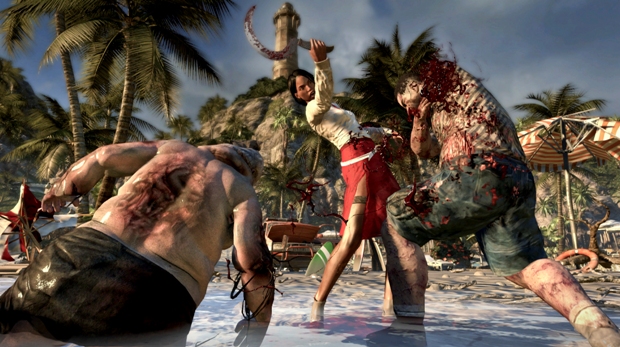 Welcome to the beautiful island of Banoi

The once idyllic Royal Palms resort on the sundrenched isle of Banoi in the South Pacific certainly isn’t going to win much repeat custom. After a night of heavy boozing you awake to find the place in turmoil; the hotel has been ransacked, suitcases looted and dead bodies litter the hallways. While looking out the window, you see someone fall past your balcony to their death…

It turns out you’re one of the few survivors of a zombie apocalypse – and it’s not going to be easy to make sure it stays that way. But there’s no time to take it all in as a friendly voice comes through a loudspeaker, offering guidance out of the besieged hotel. It directs you to the beach where you join other panicking tourists and the extent of the outbreak becomes clear.

What appears at first glance to be a shooter is actually more RPG based and requires you to scour the resort for weapons, collect money and complete missions for XP to upgrade your character’s skills and abilities. Dead Island is perhaps best described as a combination of Borderlands, Fallout 3 and Left 4 Dead – three classic games wrapped up in one bloody package. Oh, and there’s some Dead Rising thrown in for good measure too!

After that harrowing intro scene, you get to pick one of four playable characters: Xian Mei, Sam B, Logan or Purna. Each has their own back story, reasons for being on the island and, most importantly, special skills. Xian Mei works at the hotel having moved from her home in China (turns out she’s good with sharp weapons), Sam B is a rapper who was at the hotel for a gig (blunt weapon expert), then there’s the obligatory former American footballer Logan who fell from grace (he’s the throwing specialist) and Purna, an ex-policewoman from Australia (she knows best how to use firearms). Our personal favourite is Sam B – not only because he sports some fairly decent attack moves including the head stomp and has the strongest stats of the four – but because we actually took a liking to his catchy “Who do You Voodoo” song in the opening movie… 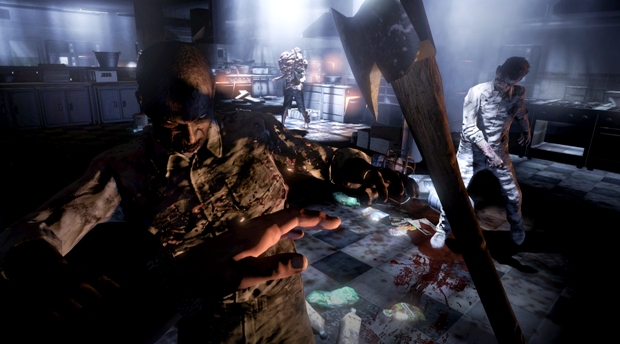 At the beginning you’ll come face to face with standard, slow zombies – those typical of the old B-movies but zombies level up too – something which is readily apparent right at the beginning of the game. Within a few missions, you’ll experience a huge leap from the slow stuttering level one walker to the faster, far more powerful and angry level threes and fours. Trust me, it’s quite a shock when you’re still weak and holding nothing but a tired-looking boat paddle for protection.

If you’re struggling in the solo player mode though, the co-op option is quite a selling point. Thanks to the drop in/drop out setup, four friends can play together and work as a team to make mince meat of the undead. All in all, Dead Island feels like a deeper version of Left 4 Dead, the RPG elements really adding to the teamwork aspect.

As you’d expect from your average holiday destination, there aren’t many conventional weapons lying about the place. Lucky for you, there are all sorts of items that you can get your hands on. Watch it though, swing your weapon too often – or run about a bit too much – and your stamina bar will quickly deplete leaving you breathless and stranded.

Besides the array of sticks and debris available for wielding, punches and kicks are also in your repertoire and prove vital when your beloved weapon suddenly breaks mid fight. 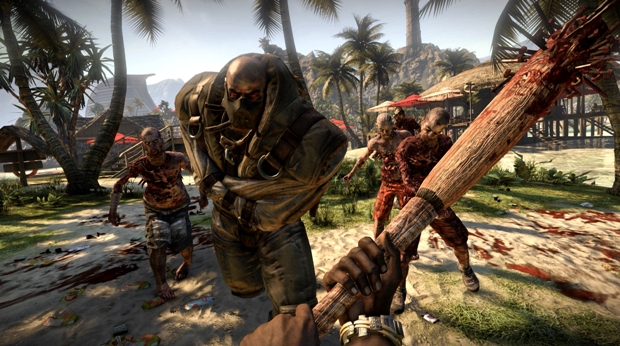 Make sure you get hold of some decent weapons… you’ll need them!

Workshops allow you to combine items to create an uber-weapon, which is when the fun really starts. It’s remarkably similar to Dead Rising 2 in that respect and there are plenty of customisation options – the first, for example, is the option to add nails to a baseball bat to create a kind of meat tenderiser. Problem is, even your favoured weapons only last so long so it’s essential that you repair/upgrade them regularly. Do note that loads of money is needed for this so you’d better rifle through as many suitcases and corpses as possible!

Guns are fun, of course, but ammo is limited – and the satisfaction is far greater when you arm yourself with something that can slice and dice instead. The animations when zombies reel from a blade’s impact is really satisfying and there’s nothing better than getting a direct hit and seeing your foe’s arm fly off, or their rotting flesh fall away from their torso. Gruesome perhaps but really rewarding!

If all else fails and you’re severely overpowered, there are also many opportunities to blow up the bad guys by destroying the occasional stranded gas canister. This proves incredibly useful when faced with numerous opponents or tackling a boss.

With a game so focussed on melee combat, it’s perhaps a little surprising that it’s sometimes difficult to gauge how far away an enemy has to be to make contact when swinging a weapon or a fist. Many times you’ll just see your hands flailing in front of you and the zombie taking no damage, only for the greedy sucker to dive in for the kill moments later.

Visually, Dead Island isn’t the best looking game in the world but it can look absolutely stunning with the beach vistas and picturesque towns. However, there are moments when things look shaky in the graphics department. Close up, the characters and their animations can look a little weak, and we did notice a few occasions when the game stuttered or there were some irritating glitches – but these were few and far between and shouldn’t deter a purchase.

Lip synching is rotten though, with the words that tumble from the NPCs rarely matching the movement of their mouths. Throw some slightly dodgy accents into the mix and it does slightly erode the great atmosphere that’s been created, making it almost comical like in Dead Rising 2. 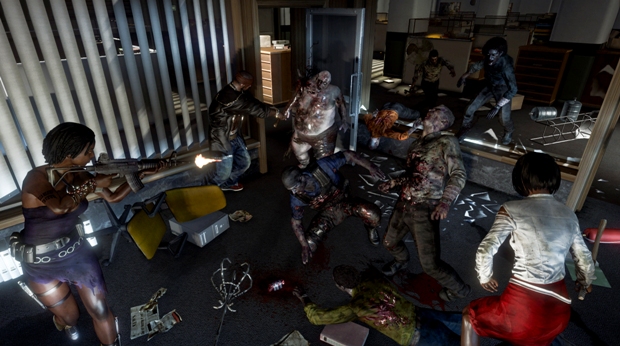 It’s not a scary or particularly eerie game like FEAR or Condemned but there are plenty of times you’ll jump when a cadaver suddenly stirs and leaps at you, or when the deserted sewers erupt with life. Perhaps the fear factor is lessened by the fact that restart points are generous – which is handy as you’ll often be swarmed by bad guys and eaten. Die and you’ll find yourself resurrected close by, ready for more slaying – although your stash of cash will be slightly depleted. Fortunately, there’s a plethora of energy drinks dotted around that can also help stave off your untimely demise!

Overall, the story progresses nicely with the gameplay punctuated by cut scenes to explain the mysteries of the island. Although these can seem quite jarring on occasion, disrupting your game, they can be skipped if you so desire.

So does it live up to the trailer? Perhaps not – but what you have is one of the biggest, bloodiest and most involving games ever to star the undead. If you’re into survival horror, there’s plenty to sink your teeth into and this is highly recommended – especially with a few friends.

Looks good, sounds good and is great to play on your own or with friends. There's plenty to explore on the huge island of Banoi and loads to do

Doesn't quite live up to the hype of the trailer and graphics and voice acting is dodgy in places. Weapons degrade too quickly

Final Verdict:
SUPERB
Dead Island borrows elements from numerous games and proves entertaining and fun for fans of survival horror. If you love zombie slaying, love weapons and love gore, then this is for you
A copy of this game was provided by Developer/Publisher/Distributor/PR Agency for review purposes. Click here to know more about our Reviews Policy.