Posted By Kartik Mudgal | On 09th, Aug. 2012 Under News | Follow This Author @KartikMdgl 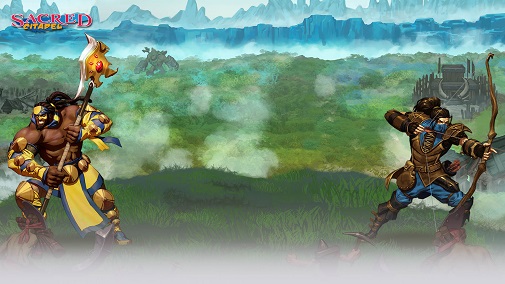 Deepsilver have announced a new side-scrolling action brawler called Sacred Citadel, which is being developed by Southend Interactive. The game will also be part of Deepsilver’s GamesCom line-up.

The game features several playable character classes like, afiri Warrior, the Ancarian Ranger and the Khukuri Shaman. They have their own skill set which can be individualized through RPG features and collectible items.

There are dual wielding, combo attacks and also the ability to ride mounds, use war machines. There is also a currency system which you can spend in the towns of Sacred Citadel.

Three warriors unite against an evil that threatens to enslave the once peaceful world of Ancaria. Lord Zane’s Ashen Empire has created an army of Grimmocs, modified Orc henchmen at war with the Seraphim. Only when these heroes unite and use their skills to support each other they will stand a chance!

The game will be released on 2013 on PSN, Xbox Live and PC and also features multiplayer mode with three player drop-in/drop-our co-op mode.