This promising open-world game from solo developer Romain is punching well above its weight with AAA levels of ambition and scope.

The indie game development scene has been budding over the last decade or so, largely thanks to flexible development tools and accessible distribution platforms like Steam and Epic Games. Thanks to flexible and powerful engines such as the likes of Unreal Engine 5, even smaller indie teams can create compelling experiences that can stand on their own two feet against most AAA releases. In this feature series, we have talked about many such games including but not limited to Black Myth: Wukong, ILL, Road to Vostok, and a few more.

Today, we will be looking at yet another ambitious title in the form of DERELICTS. Originally conceived as a solo development project, DERELICTS punches well above its weight in certain aspects, and as such – it could very well end up being the next smash hit on Steam. DERELICTS takes cues from a wide array of sources and crafts something that is both familiar and fresh at the same time, and so we ask the question – what the hell is exactly DERELICTS?

Developed by solo developer Romain, DERELICTS is a post-apocalyptic survival game set in a daunting forest-like environment that’s filled to the brim with horrifying creatures and unfavorable environmental conditions. Players embark on an epic quest to uncover a larger mystery surrounding the post-apocalypse. Unlike most contemporaries of the genre, DERELICTS actually has a decent and well-established story and surrounding lore. You see, you start the game in a space shuttle as a part of a team that has been sent to investigate a foreign signal in space. But as fate would have it, the space shuttle crash lands on Earth. Separated from your team of robots, it’s up to you to fight for your survival and uncover a larger mystery about a radiation signal that caused the Earth to become uninhabitable in the first place.

What’s especially interesting here is that the developer has actually gone ahead with crafting a proper story for the experience. It’s commonplace for gameplay-focused indie games to skimp out on the story entirely or create a rough framework for a story and call it day. It’s even more common in survival games, so it’s rather surprising but also appreciable that Romain is putting the required effort to create a well-rounded experience in that regard. DERELICTS will also include NPCs in its game worlds which will give out a bunch of quests that will advance the story and ultimately, bring it to a definitive conclusion with a final level.

On the gameplay side of things, DERELICTS‘ core gameplay revolves around collecting valuable resources and using them to craft a wide variety of gear and weapons that will, in turn, help in farming resources more efficiently. For example, you might start off chopping logs manually through a trusty axe which would then have to be cut into pieces using a saw, but later on, you might gain access to a bunch of special equipment that does all this work for you. Additionally, there are also a bunch of item recipes to be found across the world that will help craft all these different kinds of equipment.

Players will have to collect a bunch of these resources and dump them all together to create a base of operations. DERELICTS offers a wide variety of options when it comes to base building, and players can actually customize their houses to their heart’s content by choosing one design over the other. You can install bulbs, create wooden gutters, and install different types of machines to better prepare yourself for the many challenges that lie ahead. Running all this machinery will, of course, require energy which can be generated by installing solar panels or turbines in the water. Long story short, DERELICTS has a comprehensive list of options when it comes to base building – and we can’t wait to see how the full game delivers on these interesting concepts. 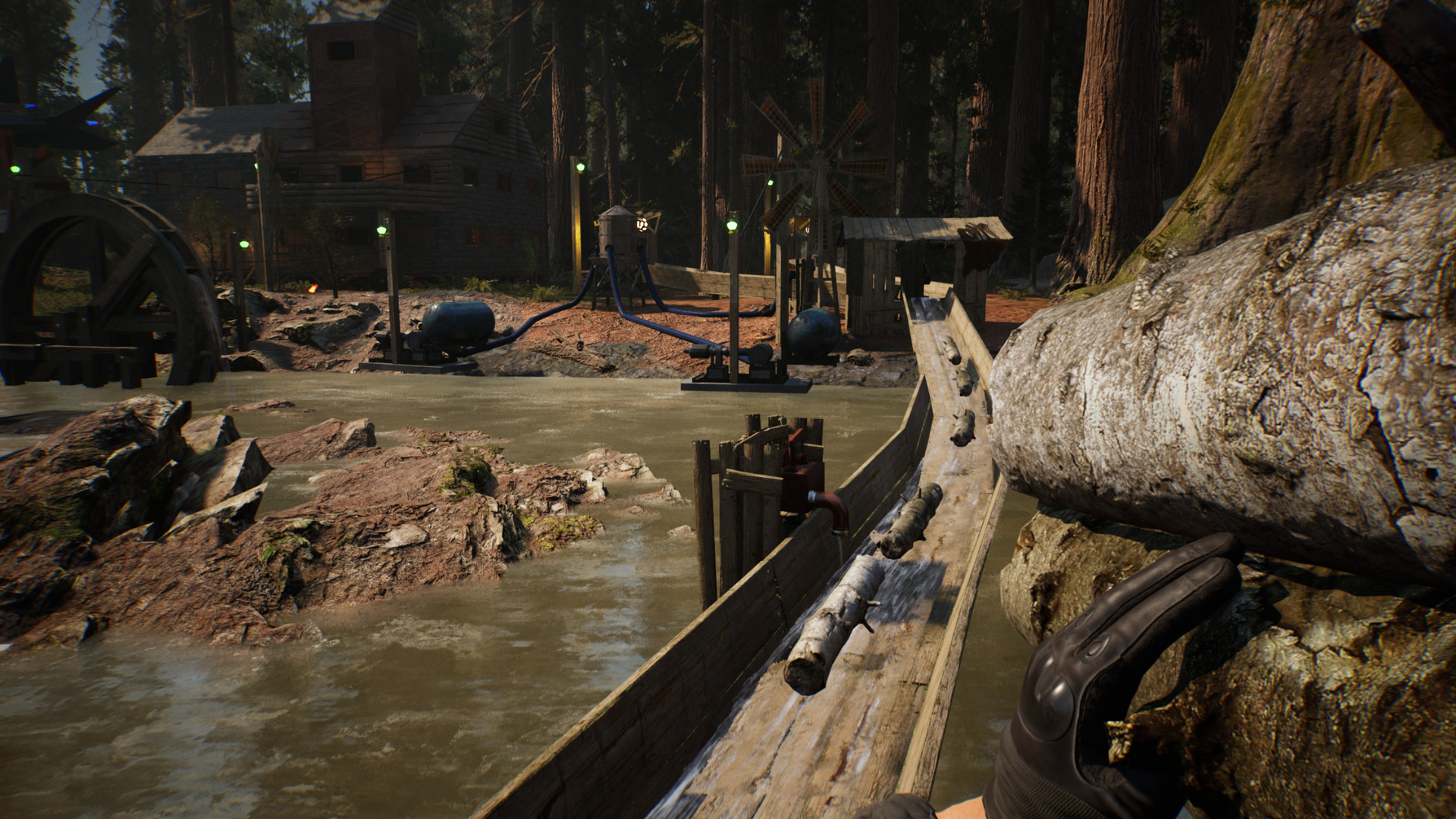 Additionally, DERELICTS promises a harsh environment with constantly changing weather conditions that can potentially hold huge ramifications for the gameplay. For instance, rivers freezing out in frigid conditions may stop your turbines from spinning which will, in turn, stop them from generating energy. Similarly, you will not be able to generate any solar power at night or in a covered-up spot. Furthermore, natural calamities such as thunderstorms and rains can also trample down your most well-laid plans, so players are at the mercy of mother nature at all times.

Developer Romain has also paid due attention to the exploration department. Players will be exploring a bunch of different biomes as they take up a myriad of quests. You will have access to a select region of the map when you start the game, and as you gather the required tools such as a grappling hook, wall running boots, oxygen cylinders, and many more. Furthermore, DERELICTS‘ final mission would require players to have access to a bunch of special stones and other rare materials – so you will have to be on full alert at all times. 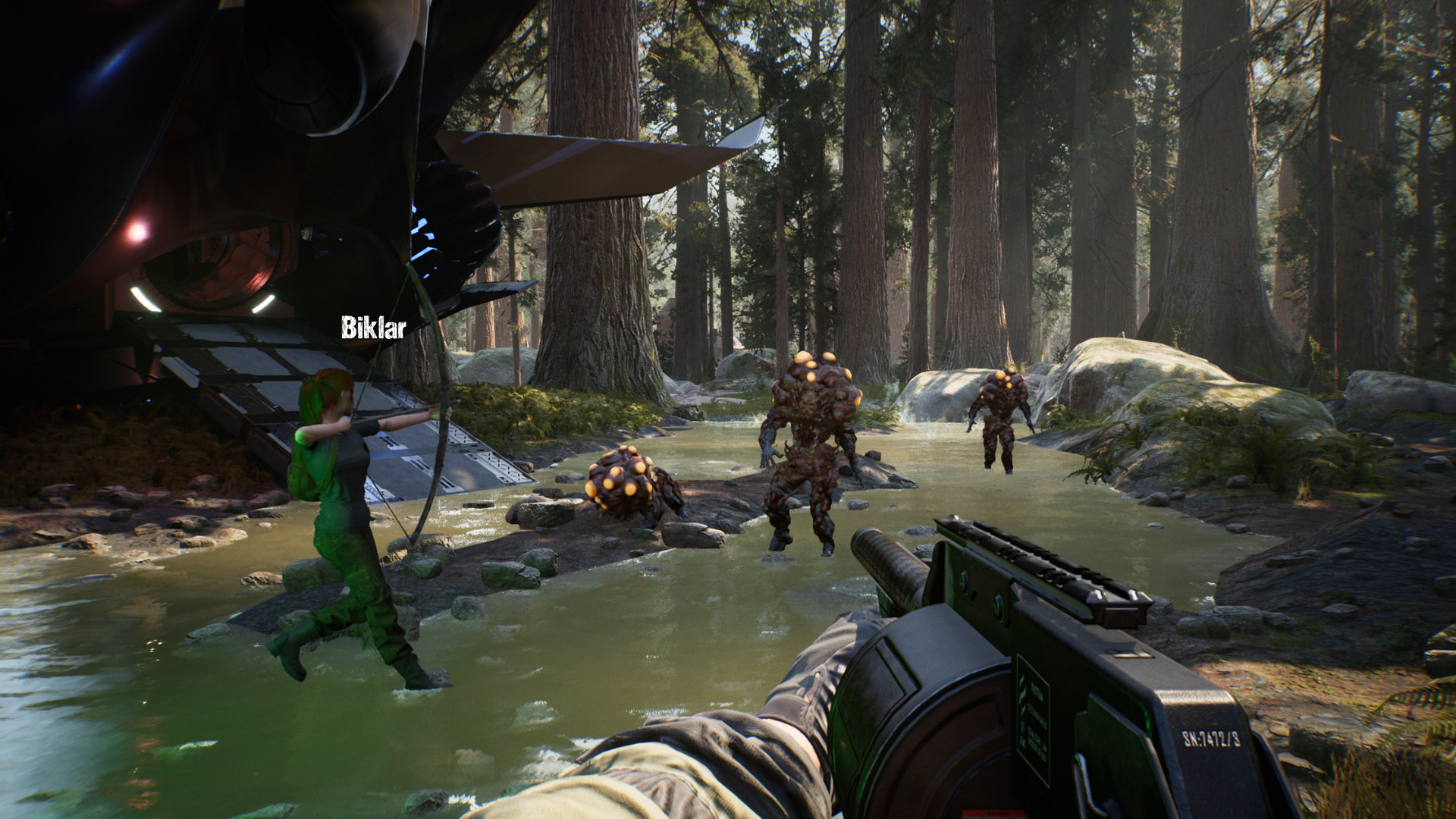 Of course, no survival game is complete without some action elements – and thankfully, DERELICTS seems to be delivering that in spades. You see, the game’s world is filled with different kinds of monsters and animals that you will have to defeat using both conventional and unconventional ways. In addition to primitive weapons such as spears and bows, you also have access to a modern arsenal of weapons such as shotguns, rifles, and what have you. Additionally, you can also lay down several traps including but not limited to spinning spike plates among others. Different biomes will house different threats that will of course have different strengths and weaknesses, so players will have to change up strategies and tactics to ensure their chances of success. Oh, and there’s also a dog companion who will accompany you throughout this journey. Sweet.

On top of all this ambitious stuff, developer Romain has also added a co-op mode so fans can buddy up and take on the many challenges together. What’s more surprising and of course, appreciable is the inclusion of accessibility options such as the likes of multiple colour blind modes among others. At a time when accessibility options are mostly limited to big-budget AAA releases, DERELICTS including such options is setting a great example for the industry.

DERELICTS has been in development for more than 2 years now, and while the project started life on Unreal Engine 4 – the developer has shifted its development to Epic’s latest and greatest, the Unreal Engine 5. Suffice to say, the game looks really gorgeous with high-resolution assets and reflections. Now that Romain has access to current-gen technology like Lumen, photogrammetry, Nanite, fans can expect the game to just get better with time. As of the time of writing, DERELICTS is being funded by Patreon, and doesn’t have a release date at this point. Of course, given the vast scope of the project and the very limited pool of resources – it seems fair to say that DERELICTS wouldn’t be releasing anytime soon. But when it does, we hope that it lives up to its lofty promises and interesting premise.