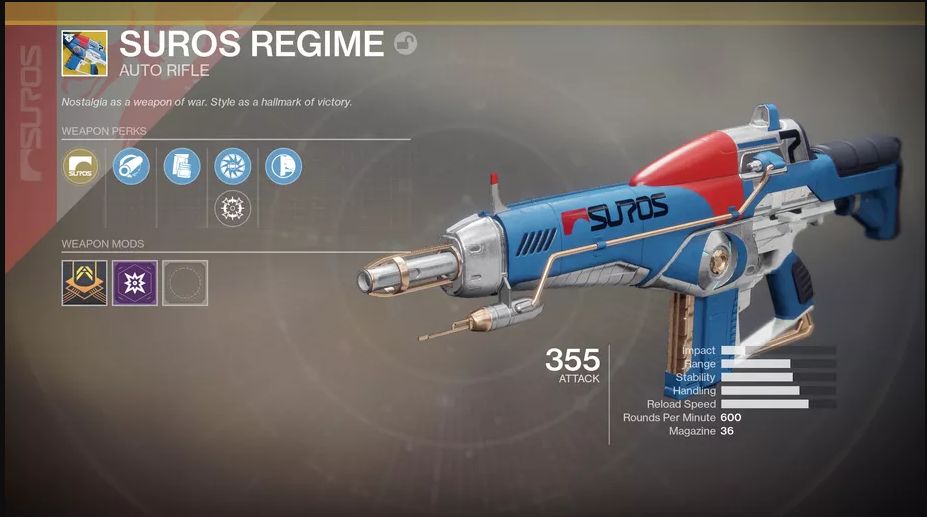 Another week, another inventory of Exotics from Destiny 2’s Xur. This time, the tentacle-faced figure of disappointment is in the Tower’s hangar, where he will remain until the next weekly reset. Head on over there now and gaze upon his wares.

This week, Xur is selling Gemini Jester (Hunter boots), Crest of Alpha Lupi (Titan chest) and Claws of Ahamkara (Warlock gloves), each for 23 Legendary Shards. Gemini Jester allows for disorienting nearby players and removing their radars while dodging…which is useless in Competitive Crucible but still. Claws of Ahamkara will be familiar to Destiny 1 Warlocks as it grants an extra melee charge.

Then there’s SUROS Regime, the original Exotic auto rifle from the first game selling for 29 Legendary Shards. The weapon features two firing modes – focused fire when aiming down sights and increased fire rate the longer the trigger is held. The bottom half of the magazine deals more damage and kills with it have a chance to heal the user.

Also, if you’re keen for a greater Prestige Nightfall challenge, take your Challenge Card to Xur for the Five of Swords. This upgrades your Challenge Card, allowing for additional modifiers to be added for a higher score multiplier.