Destiny: How To Get The Touch of Malice Exotic Scout Rifle

The Touch of Malice is one of the better exotics out there. 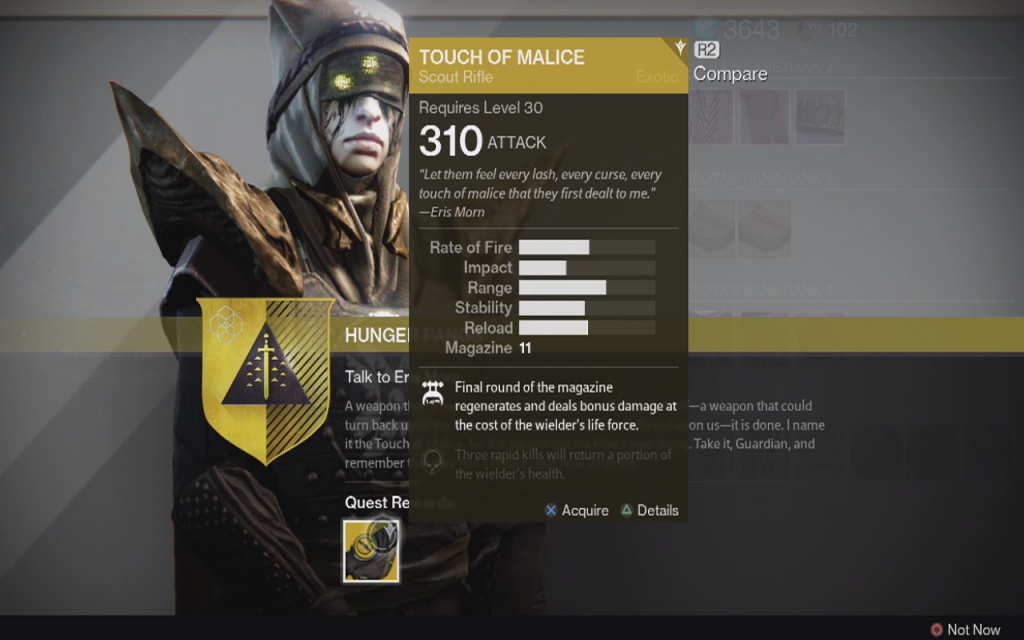 There’s very little doubt that Destiny’s The Taken King has been a big hit. The game has been such a bit hit that people are trying to get through the raids as quickly and effectively as possible while also getting the coolest loot. Luckily for you, another exploit has popped up that will allow you to get access to a rather exotic scout rifle, known as the Touch of Malice. While there are some people who wonder why you might want exotic weapons like this one, the fact of the matter is that the Touch of Malice is one of the more impressive weapons in the game, weighing in with a light score of 310.

Getting the weapon certainly isn’t easy, but the friendly folks at Just Push Start have laid out the many steps needed in order to grab it. The key to starting the quests that will lead to you getting the rifle is first getting your hands on a piece of calcified fragment. When you have this you will need to talk to Eris Morn at the tower who will send you on some quests to get even more fragments. Apparently you’ll need 15 in all in order to move forward.

At this point, you’ll have to take on a Hunger raid against a Warpriest, back out of the raid, talk to Eris and then go back in. After completing that raid, players will need to round up a massive 45 calcified fragments and then continue talking to Eris Morn while getting new quests along the way. Check out all the steps at the link above and check out what kind of abilities the Touch of Malice gun brings in the screengrab below and then have fun trying to get the weapon yourself in Destiny’s The Taken King expansion.