Xur makes one last stop before the April Update. 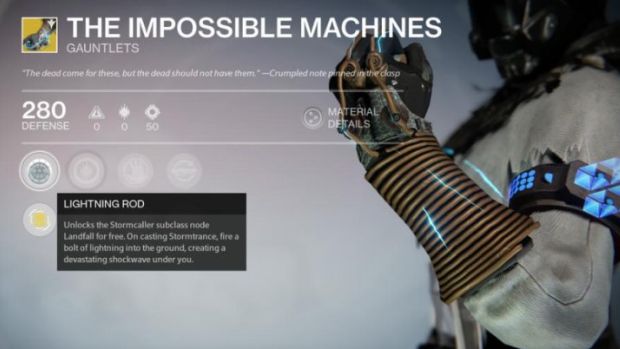 Exotic vendor Xur has returned to the Tower in Bungie’s Destiny. This will be the last visit before the big April Update arriving on Tuesday so find him near the Speaker today. He’ll remain there till 2 AM PST, April 10th.

Xur’s inventory includes Crest of Alpha Lupi (Titan chest), Don’t Touch Me (Hunter gloves) and The Impossible Machines (Warlock gloves), each for 13 Strange Coins. There’s no Exotic weapon this week – instead you can pick up an Exotic Chest armour engram for 19 Strange Coins. A Legacy engram for gloves is also being sold for 29 Strange Coins, which is guaranteed to deliver any Year One Exotic gloves you don’t have.

Other items from Xur include Three of Coins for 7 Strange Coins (which will be useful when the new Exotics arrive on Tuesday) and Glass Needles for 3 Strange Coins each (allowing for re-rolling Exotic armour). Stay tuned for more details on the upcoming update.