Does The Fall manage to rise?

After the grand success of Human Revolution, the general consensus is that a full blown Deus Ex game for next generation consoles would be next. But when Square Enix announced that the next iteration of the franchise would be hitting tablets, I was left baffled. Why on earth would they create something from scratch and bring it to totally uncharted territory, especially given the fact that Human Revolution was a commercial hit on consoles and PC?

But after spending the 5 hours or so with The Fall, I was proven wrong.

The Fall is by no means as good as Human Revolution but whatever developers N-Fusion and Eidos Montreal have offered remains strong to the franchise’s roots. Given the sci-fi nature of the franchise, an iPad feels like a natural platform for The Fall. The high level production values and excellent user interface in the game go a long way towards creating a tense experience for the player. 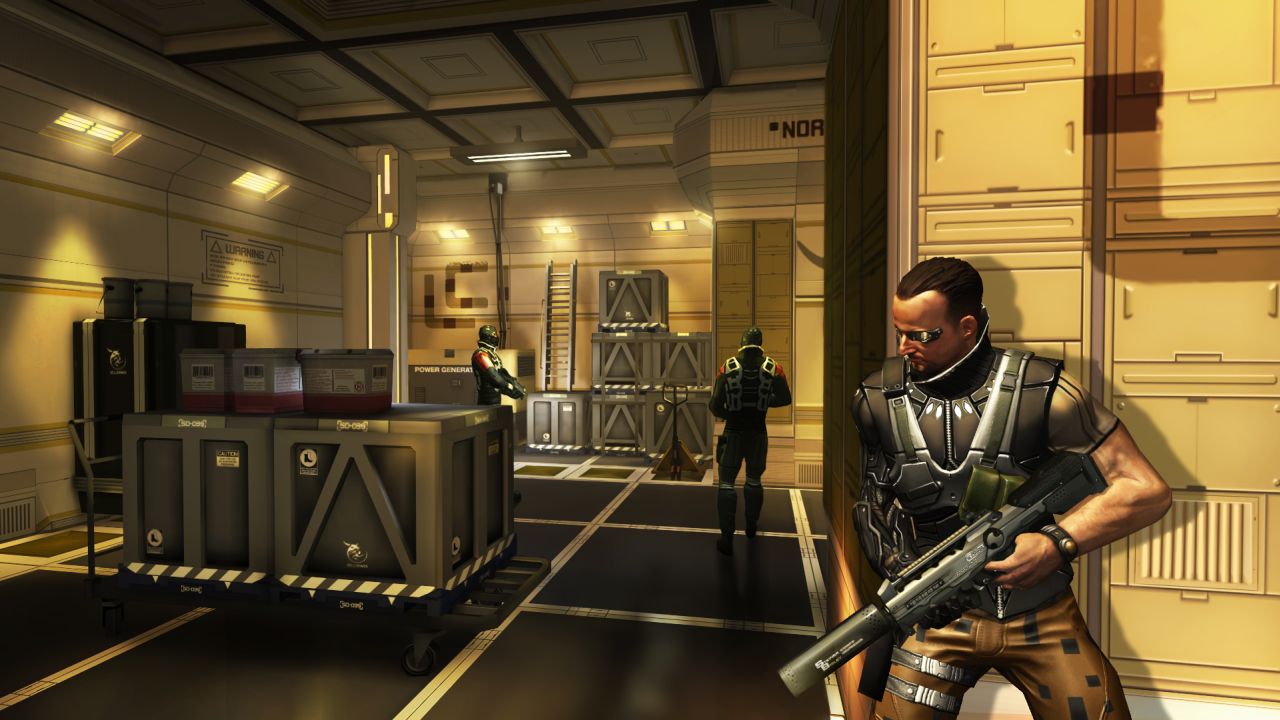 Deus Ex The Fall takes place in 2027 and puts the player in the shoes of Ben Saxon, an augmented solider looking to unravel a drug conspiracy and in the meantime save himself and his associates from the Tyrants, a group of private military employers. I won’t give away much about the story (for spoiler reasons) but Deus Ex fans can expect a similar suspense-filled plot with excellent voice acting and presentation.

"Eventhough stealth is where the game truly shines, the AI of the enemies is questionable. There were several instances where I entered the enemy’s line of sight and wasn’t noticed."

At times you won’t believe that such a game is possible on a tablet, given the extremely detailed indoor and outdoor environments. However the quality of some character models serves as a harsh reminder that this is tablet-based game at the end of the day.

Like Adam Jensen, Ben Saxon can take cover behind walls and other objects and take down enemies in a brutal or a stealthy manner. Just like in Human Revolution, The Fall gives you the choice to keep it cool and stealthy or go in guns blazing.

The choice is yours. There are also multiple paths to take and players can sneak pass guards and turrets using ducts. 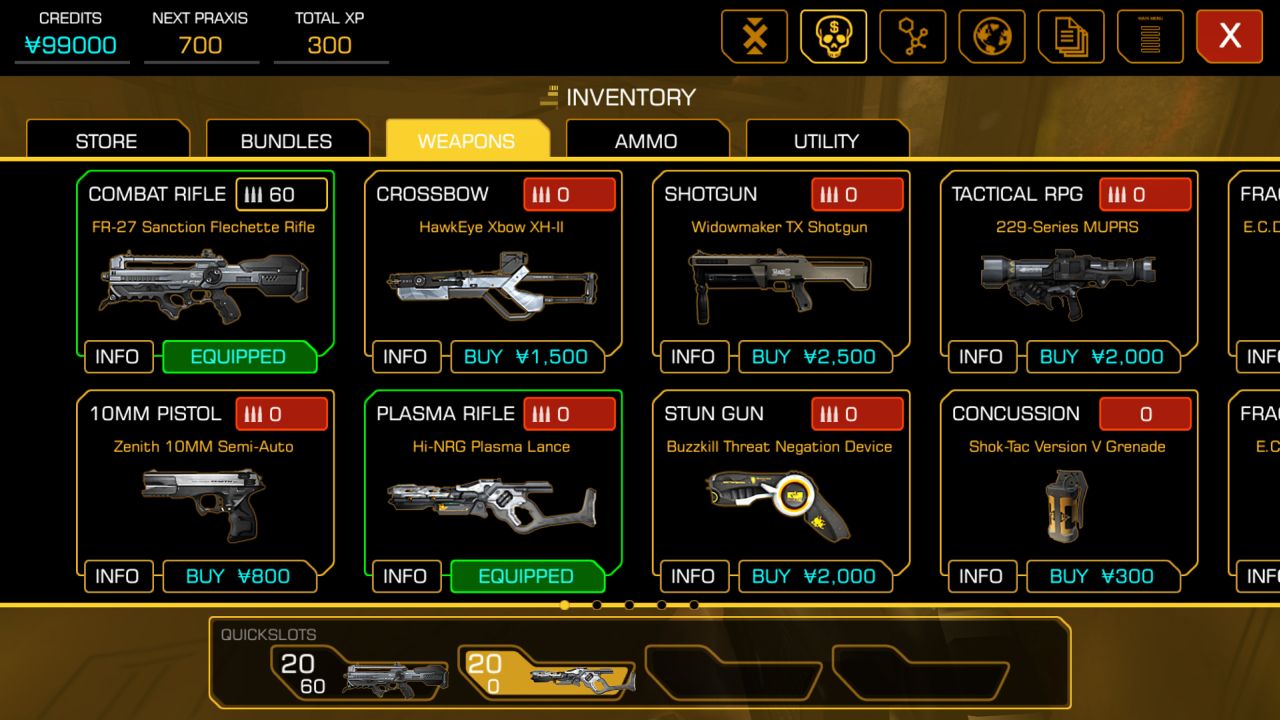 Even though stealth is where the game truly shines, the AI of the enemies is questionable. There were several instances where I entered the enemy’s line of sight and wasn’t noticed. This makes close quarters combat very easy to pull off.  Not to mention that there are several graphical glitches in the game like two enemies literally become one when they walk in to each other. The enemy AI in Human Revolution was exemplary and although it will be unfair to expect that level of realism on a tablet, the developers should have put in the extra effort necessary to polish the enemy AI.

"The episodic content model suits the platforms that the Square Enix is targeting, and it’s a welcome change in the long running franchise."

Whilst shooting was a major element in Human Revolution, The Fall unfortunately stumbles in that department. The shooting in the game just doesn’t feel natural and I was constantly fighting with my iPad.  This is a real shame because The Fall offers really cool-looking weapons like shotguns, machine guns and more. Although you can upgrade your weapons, I found little reason to do so. Underwhelming shooting mechanics is one more reason to play this game the stealth way.

The Fall also features an in-game store which can be accessed by simply pausing the game.  As you complete missions and search trash bins and other objects, you will collect credits. You can use credits to buy all sorts of ammunition and guns from the in-game store. Despite the troublesome shooting mechanics, the different types of grenades and mines are most impressive. I found myself consistently spending credits on explosives as they are vital in taking out some of the tougher enemies and unmanned robots. 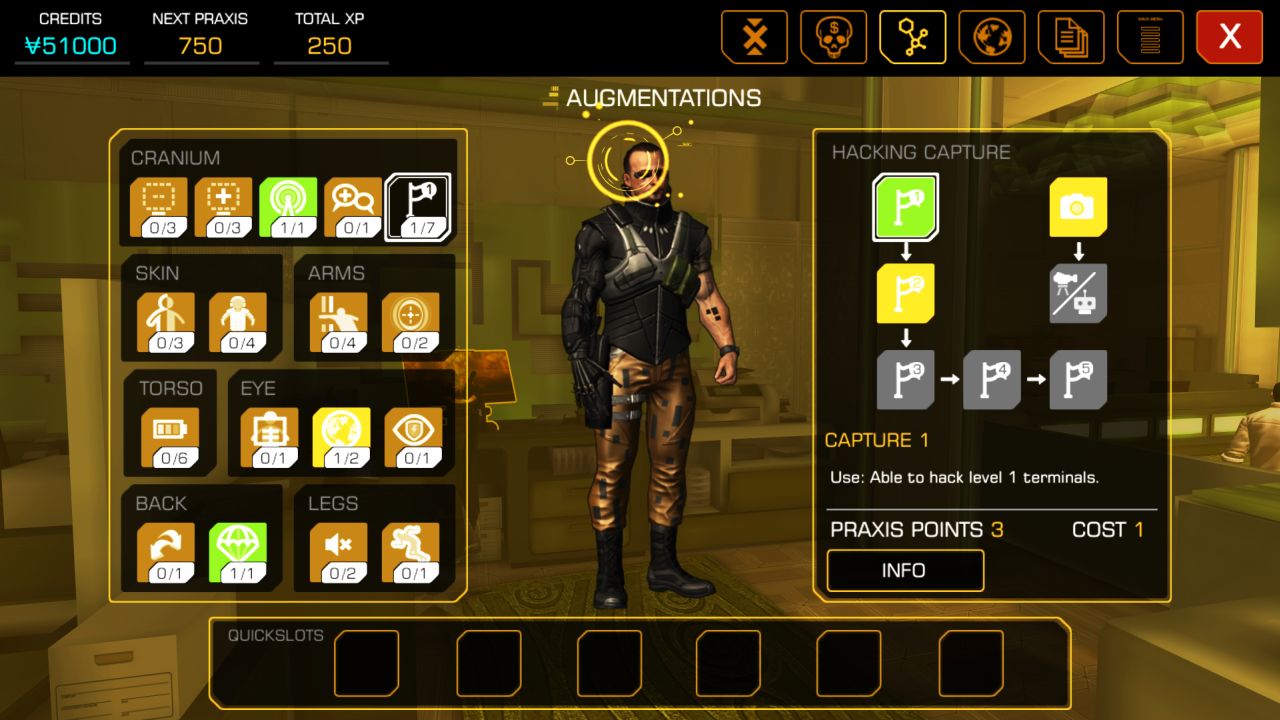 The Praxis Points system also returns in The Fall and it’s pretty much what you’d expect: Level up to earn Points, which you can then use to unlock complex augmentations like the ability to see through walls, take down multiple enemies at once or shift heavy objects to find alternate routes. Thankfully, there haven’t been any massive changes in this department – if it ain’t broke, why fix it?

Deus Ex The Fall is a new direction for the franchise. The episodic content model suits the platforms that the Square Enix is targeting, and it’s a welcome change in the long running franchise. It’s not the perfect Deus Ex game but it gets the job done while still being highly entertaining to boot. If you are looking for solid stealth gameplay or are simply desperate for a new Deus Ex game, The Fall may be a worthy buy.

Enemy AI is dumb.Shooting does not feel natural.Graphical glitches may bog down experience for some players.

Final Verdict:
GOOD
Despite a few issues, Deus Ex The Fall is yet another solid entry in the franchise. The transition to tablets is faithful to the core gameplay of the series with only a few but noticeable sacrifices along the way.
A copy of this game was provided by Developer/Publisher/Distributor/PR Agency for review purposes. Click here to know more about our Reviews Policy.