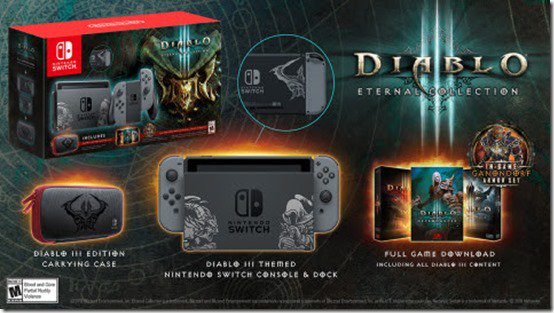 Nintendo is really going all in on Switch bundles for this holiday season. We have one announced for Pokemon, one for Smash Bros., one for Mario Tennis, one for Fortnite, and now, they have announced one for Diablo 3: Eternal Collection, which launches on Switch in November, as well.

This bundle will include a limited edition Nintendo Switch console, with a specially etched dock, a special Diablo 3 themed carrying case for the Switch, a download code for the game, and, most interestingly, special etchings on the back of the Switch console itself. It will come for $360 total, and in North America, be exclusive to GameStop and EB Games (though no such retailer exclusivity seems to be in play in Europe).

Nintendo also released a new trailer showing off this new bundle, which you can see for yourself below. It’s certainly interesting to see the company be willing to bundle third party games with its systems too. It makes for a nice change from routine.