Diablo Immortal – 15 New Things You Need to Know Before Playing

The long-in-development and controversial free-to-play action RPG is out on June 2nd for PC and mobiles. Here's what you need to know.

After a controversial reveal at BlizzCon 2018 and a long time spent in closed alpha and beta, Diablo Immortal is finally set to release worldwide on June 2nd. Not only is it coming to iOS and Android (with touch-screen optimized controls and controller support) but also for PC in open beta format. Here’s almost everything that you need to know about the free-to-play action RPG.

At launch, Diablo Immortal offers six classes – Barbarian, Crusader, Demon Hunter, Monk, Necromancer and Wizard. If you’ve played Diablo 3, then you know what to expect. Barbarian is your close-range, charging class that focuses on melee damage. Monk is also melee-focused but focuses more on multi-hit combos and nimble movement. The Crusader can throw their shield, call down damaging beams of light and protect their allies. The Wizard is your spell-wielding beast, capable of summoning meteors, teleporting and sending out balls of lightning. The Necromancer can act as a Summoner or ranged DPS, exploding enemy corpses for massive damage. The Demon Hunter dual-wields crossbows, raining down arrows while dodging around the battlefield.

If you feel like playing a different class, then making another character isn’t necessary. Instead, there’s the new Class Change system which allows for changing to another class while retaining all progress made.

Along with two Primary Attacks, each class has 12 different Skills with several unlocking as you level up. Leveling also adds additional ranks to Skills, making them stronger as you progress. You can equip one Primary Attack and four different Skills for five in total. Also, there’s no Mana – Skills operate on a cooldown basis and recharge overtime. Ultimates also fall into the Skills category but function a bit differently from the others.They can be charged by using Primary Attacks and once enough charges have been accumulated, the Ultimate can be used to augment your Primary Attack. For example, the Barbarian’s Ultimate “Blood and Fury” increases the range of Lacerate while repelling foes and adding Lifesteal to attacks. 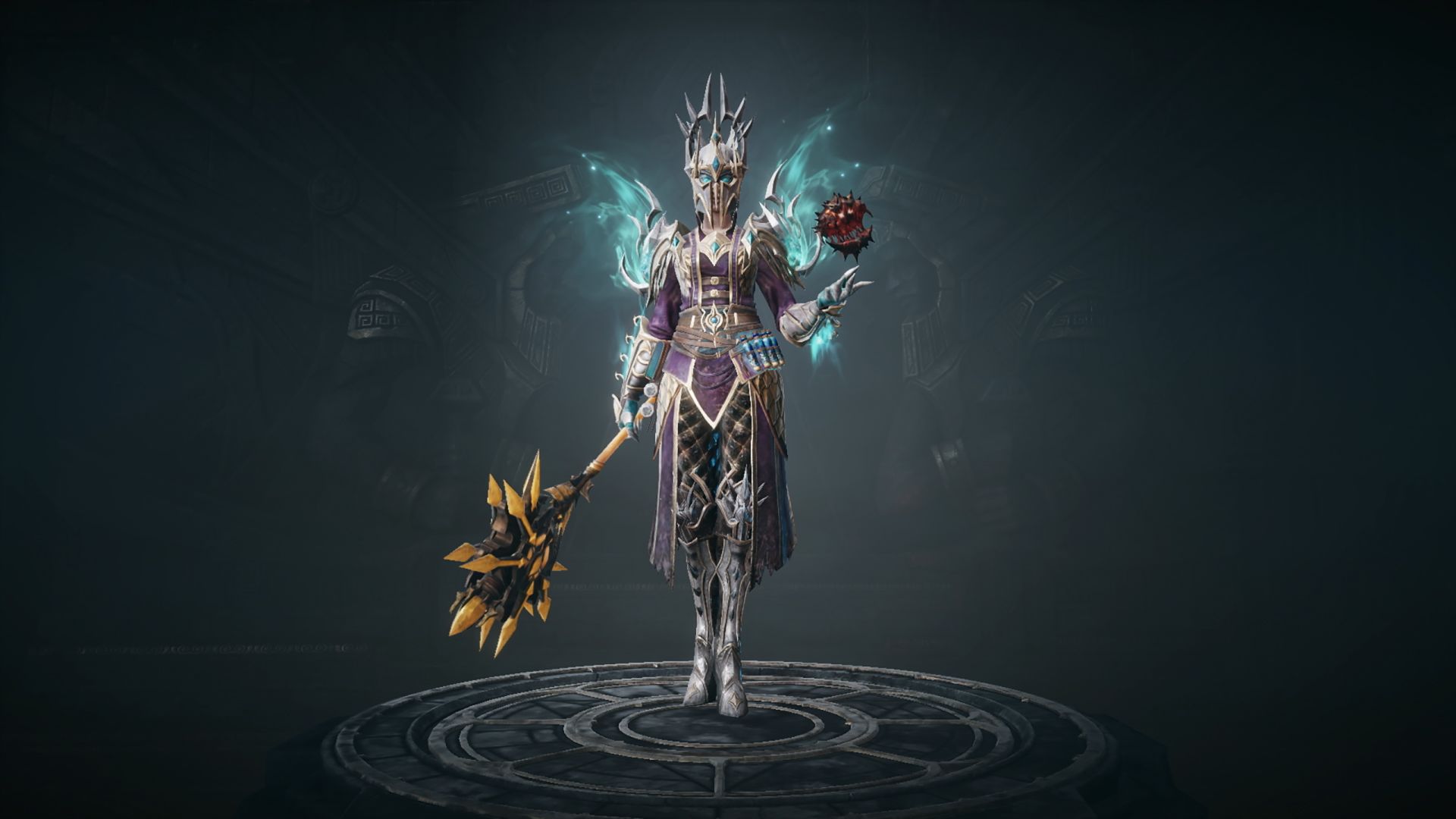 After hitting max level (which is reportedly 60 at launch), you start earning experience towards the Paragon System. This awards levels and bonus stats like increased defense, increased offense, bonuses to XP, magic find and Gold Find, PvP bonuses, and much more. There are five types of Paragon trees, each having two kinds of nodes – Persistent attributes which are always active and Specialization skills which are only active when that tree is selected. You can only have one Paragon tree active at a time so if you favor defense, go for the Survivor tree. If you’re in group play, then the Soldier or Mastermind trees are ideal. 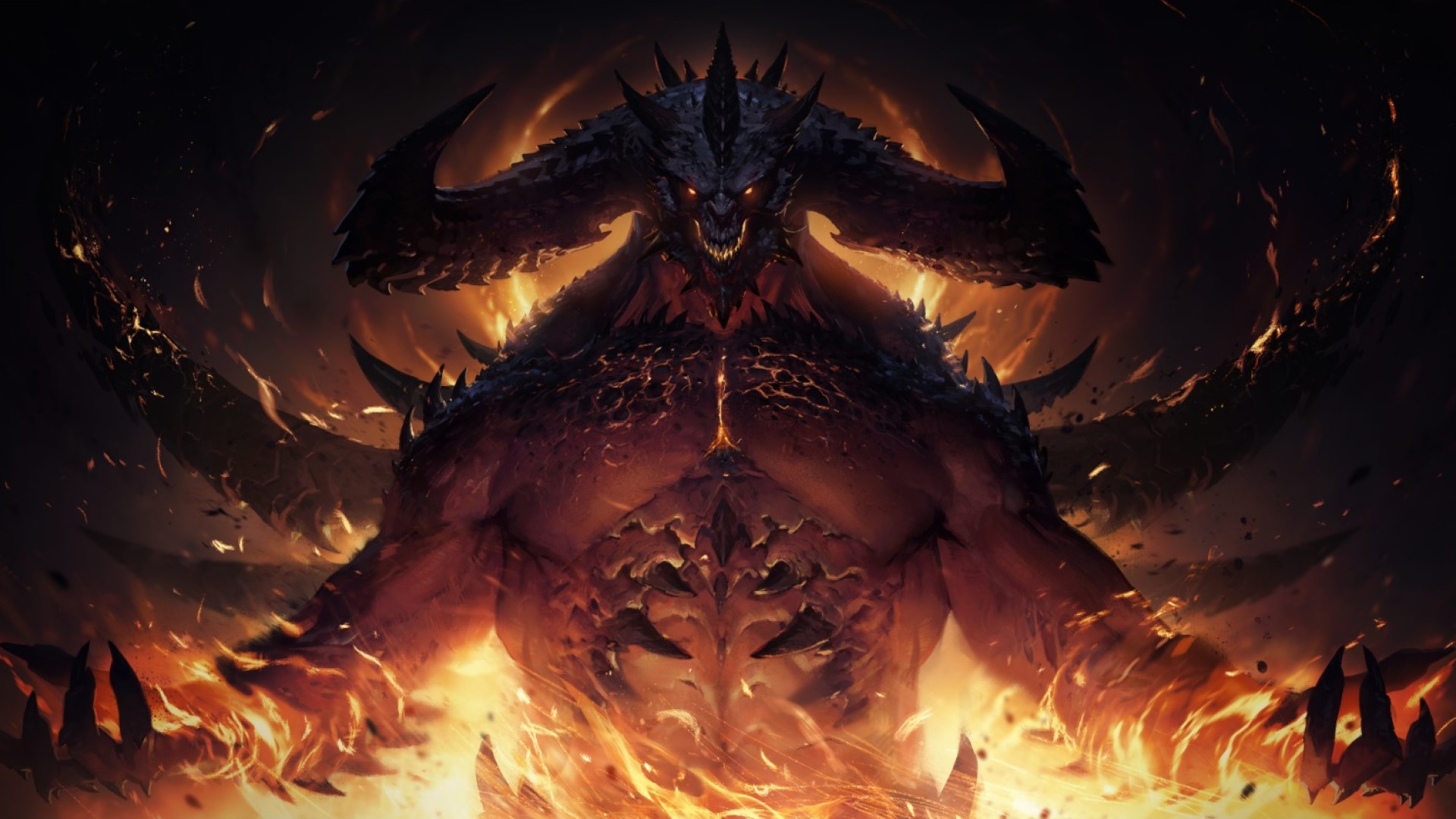 Unlike previous entries, Diablo Immortal is looking to emphasize shorter activities. While some can take about five minutes at best, certain dungeons could take you about 10 to 15 minutes to clear. This design choice is made keeping mobile players in mind, though this also means a fair bit of grinding the same activities for long periods of time to reap the rewards. 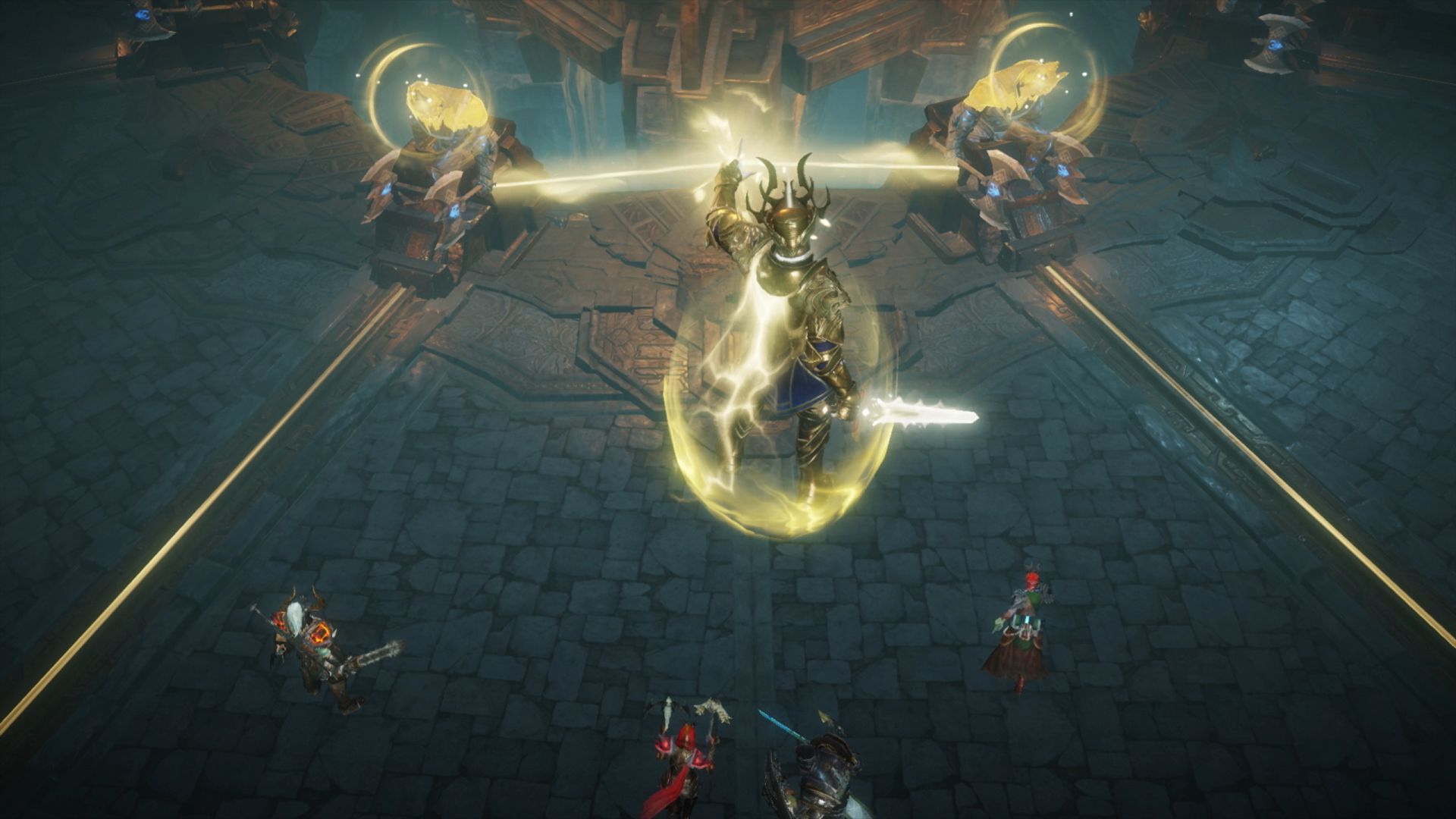 Elder Rifts are akin to Nephalem Rifts, with the one difference being that they can be made tougher with Rare and Legendary Crests. These can also grant bonuses for the players to help offset the challenge. But the main reason to do Elder Rifts is for the Legendary Gems and Fading Embers (which can be traded to the Fading Ember Merchant for Legendary Gems). One of the only ways to obtain a five-star Legendary Gem – more on that in a bit – is to use Legendary Crests, spend Platinum in the Marketplace, or craft them at the Jeweler using Runes and Platinum. 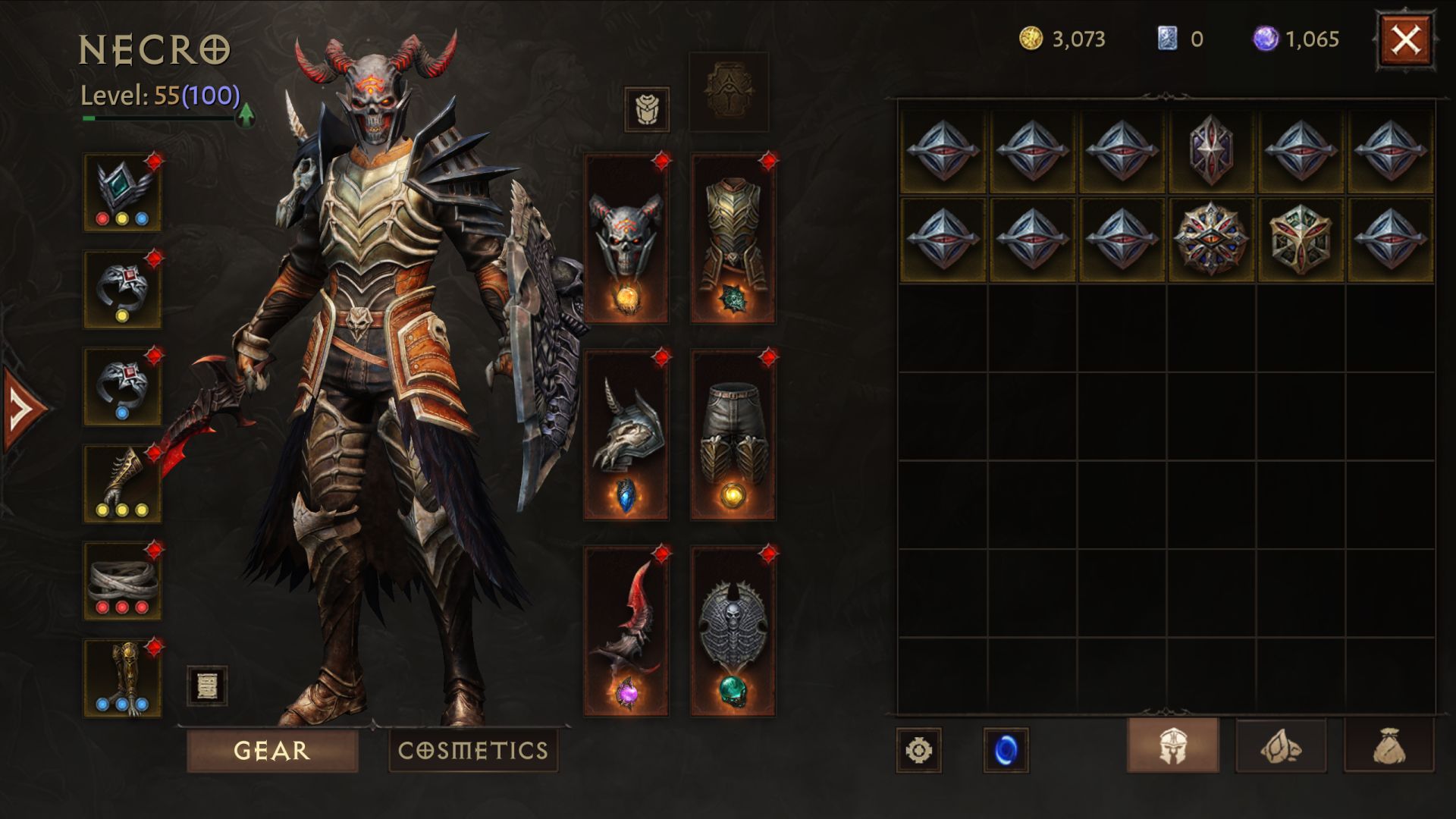 Loot in Diablo Immortal is divided into the usual rarities with Normal (White) being garbade and Legendary (Orange) being the best (gear sets are completely absent). Items are divided into two categories – Primary, which includes the Head, Legs, Torso, Shoulder, Weapon and Off-Hand/Secondary Weapon, and Secondary, namely the Neck, two Rings, Waist, Feet and Hands. You can rank up Rare and Legendary Items with materials, equip Charms to modify up to five skills, and also equip different colored gems for more stat boosts from your Secondary items (Legendary Gems can be equipped in Primary slots).

As noted above, you need Crests in order to increase the rewards gained from an Elder Rift. However, Legendary Gems vary in quality from 1 to 5 stars. In order to get 5-star Legendary Gems, you need to use Legendary Crests (or pursue the other methods above). Legendary Gems also need to be ranked up, thus increasing the Offense Rating and Defense Rating (or ORDR, in short) they provide along with improving their primary effects (along with unlocking another effect and increased Magic Find). Ranking up a Legendary Gem requires having duplicates of the same gem and Gem Power, the latter obtained from breaking down Legendary Gems.

An example of 5 Star Legendary Gems include Blood-Soaked Jade which increases all damage dealt by 10 percent and movement speed by 10 percent (with the damage bonus decreasing with your Life). You also gain 2.5 percent less damage under 50 percent life at Rank 3 and 15 percent increased chance of finding magic items at rank 5. This in addition to large amounts of ORDR and bonuses to base Attributes for each rank, resulting in up to a 50 percent increase for the base Attribute. Long story short, if you want the very best gear, you’ll need to grind a lot (or have a healthy bank balance), unless Blizzard has done some major re-balancing since the beta. 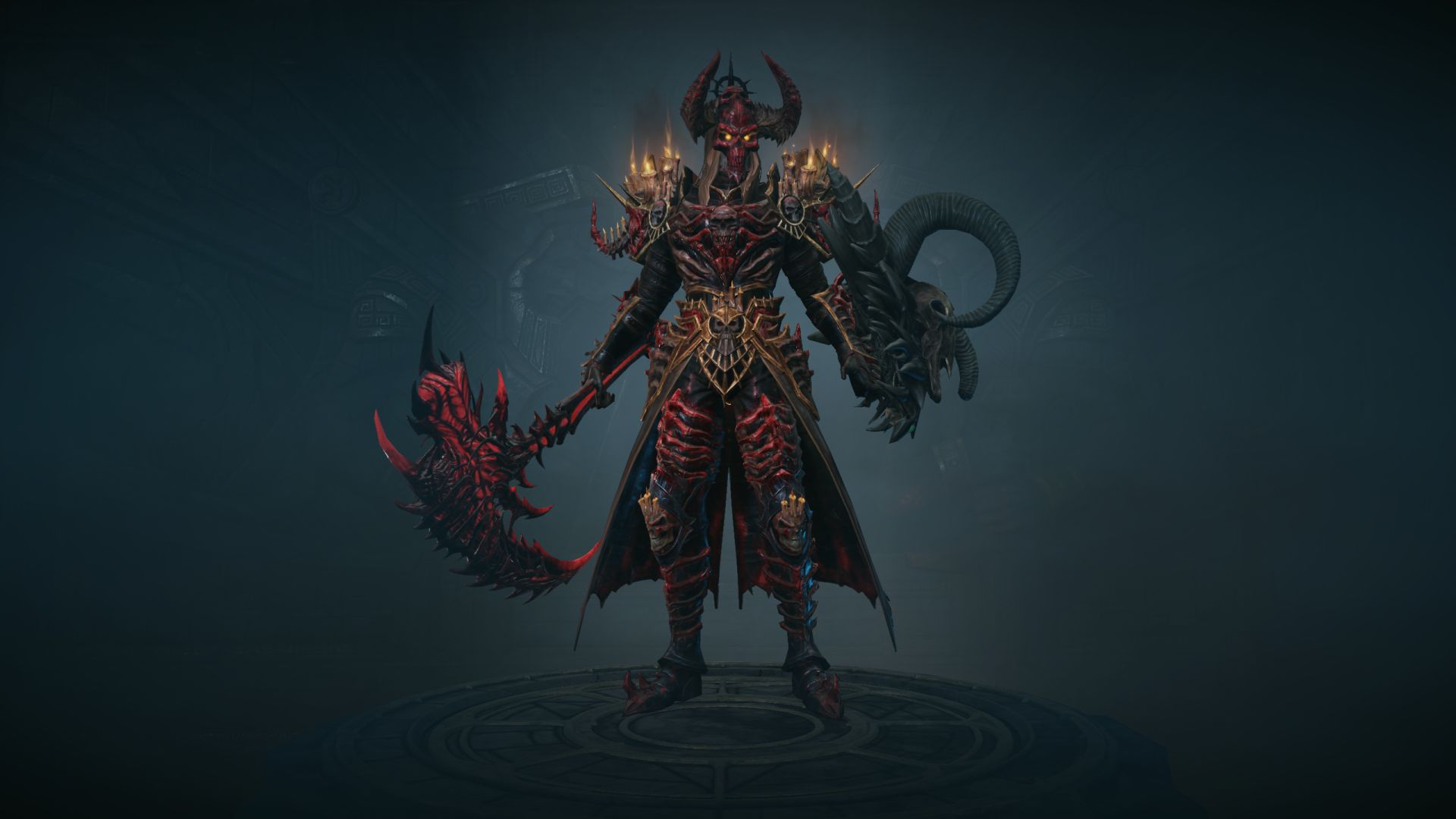 But wait, there’s more. You can also have Awakened Legendary Items which become even more powerful. All you need is a Legendary Item, a Rank 10 Legendary Gem and a Dawning Echo which costs 1000 Eternal Orbs (only purchasable with real money). Keep in mind that this is only for one gear piece – you’ll need to do this a total of six times for each primary gear slot for a true min-maxed loadout. Once this is done, you’ll gain effects like increased Sprint damage and decreased Sprint cooldown on Barbarian, increased Shield Glare damage and Sweep Attack damage for Crusader, and more. Your items also change appearance upon awakening. 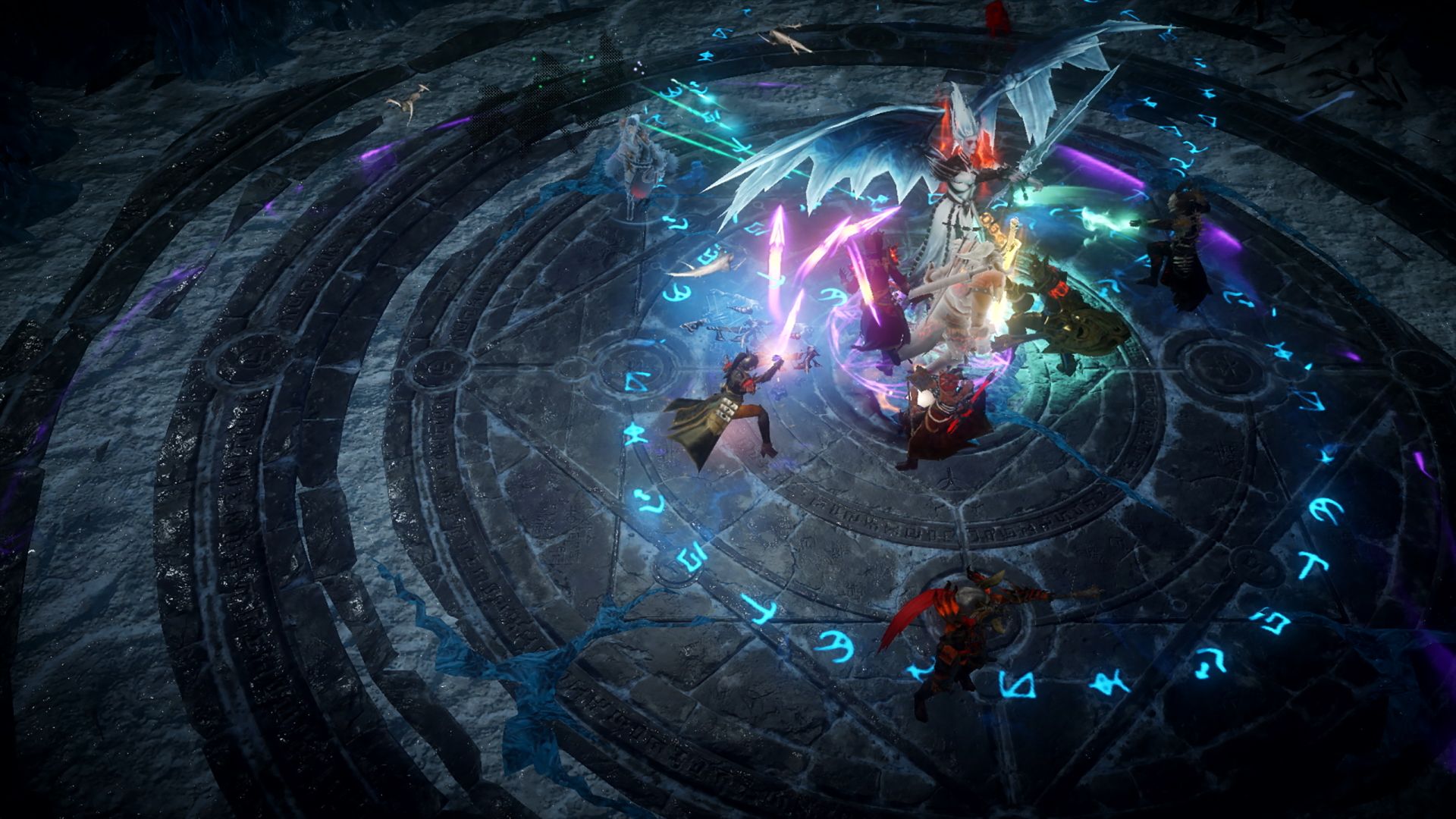 Another end-game system is the Helliquary. Available between level 41 and 45 once the main story is finished, these are essentially raids for eight players to battle bosses and receive power boosts in return. First, one must venture into a Challenge Rift and defeat the boss in question. Obtain their Legendary item and seal it in the Helliquary to receive Scoria. Refine this Scoria into Hellfire Scoria and use it to upgrade the Helliquary, which then unlocks another boss. As you upgrade it more, you’ll receive increases to your ORDR. Completing Daily Battle Pass Quests and Battle Pass Raid Activities is a good way to obtain more Scoria. 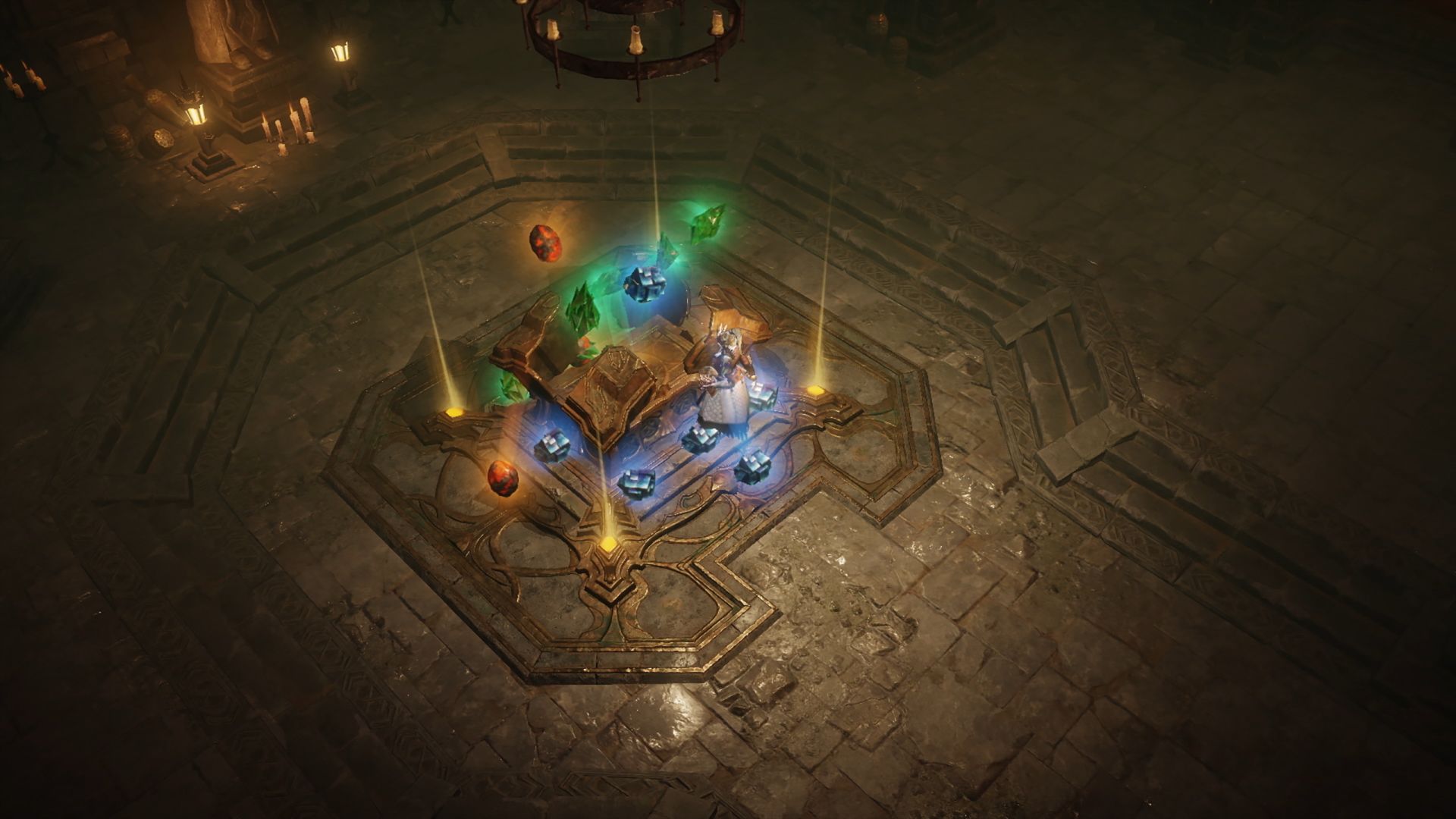 At level 49 and upon finishing Challenge Rift 10, the Legacy of the Horadrim becomes available. This essentially involves collecting Vessels, slotting them into the Shrine and upgrading them for increases to attributes like Resistance, Life, Armor, Armor Penetration and so on. To upgrade the Vessels, you’ll venture into a new area to slay enemies and collect Aspirant’s Keys. These open chests that contain Culling Stones, which are the upgrade materials in question. The amount of Keys needed to open the chests increases over time so you’ll need to keep gathering Keys from various activities and revisiting the area. 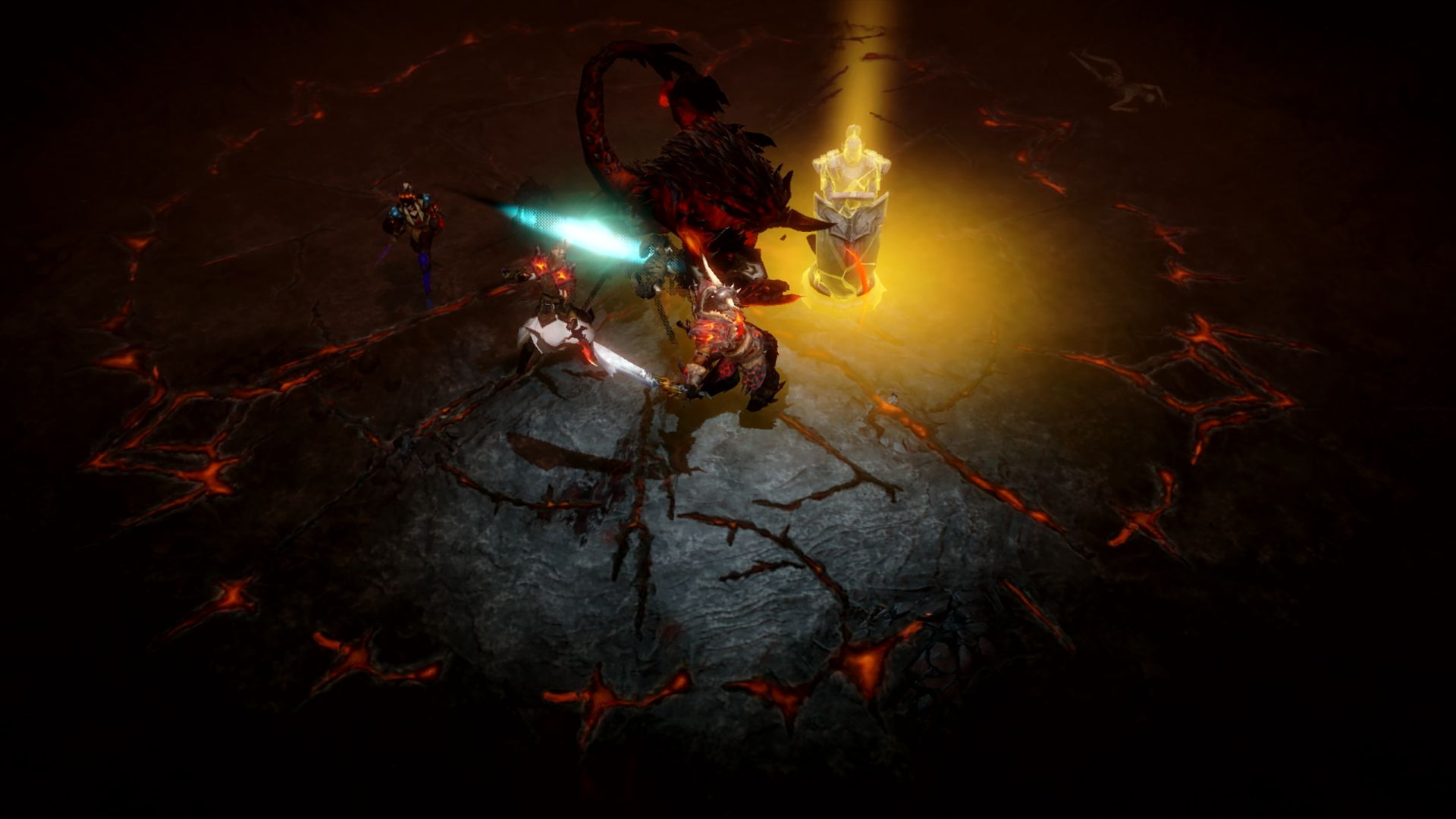 Since this is technically an MMO, there are a fair amount of activities that players can tackle together. Along with the aforementioned raids, dungeons can accommodate up to four players. You may also run into other players when exploring the world and can thus team up, forming a Warband (which can have up to eight players) to tackle dynamic events in the world. Along with voice chat, there’s also support for clans of larger players.

Battleground and Cycle of Strife 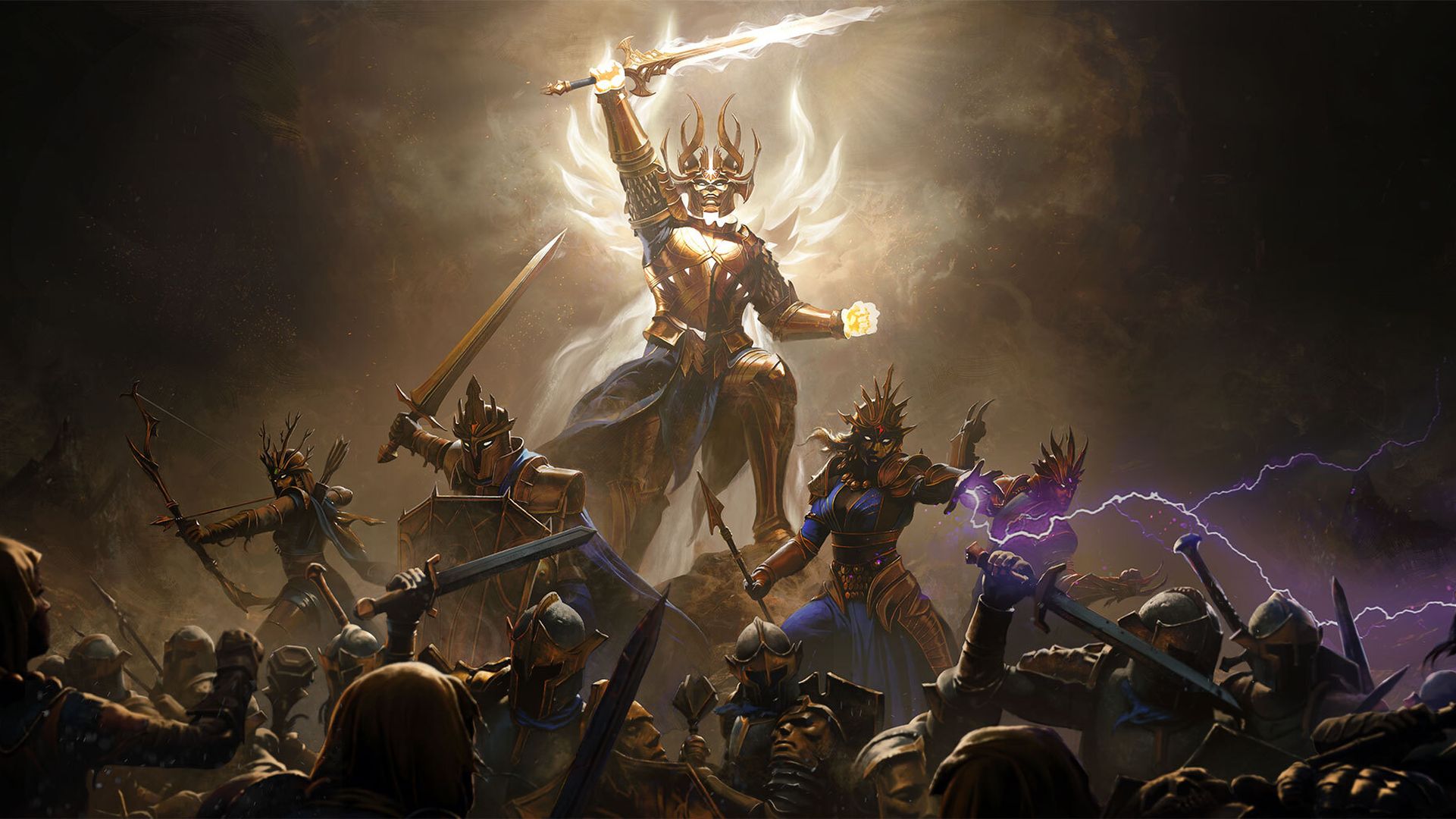 If PvP is your aim, then there’s the Battleground with 8v8 combat and a ranking system with objectives that boil down to escorting the “VIP” to the enemy team’s base. The Cycle of Strife is a more meaty end-game PvP activity though. It’s essentially a system with two factions – the Immortals and the Shadows. Up to 500 players become the Immortals while everyone becomes a Shadow (if they participate, of course). While the Shadows must partake in activities and convert Immortal players’ clans to Dark Clans (including raiding their vault), Immortals can take part in a 48 player raid (with four groups of 12 players) that battle four bosses at once to earn a boon that increases Elder Rift rewards.

Upon the Shadows hitting a certain level, the Rite of Exile begins and the Dark Clans battle each other. Whoever wins goes on to the Challenge of the Immortal where the Immortals’ best player becomes a boss and fights against the top 30 Shadow players. If the Shadows win, then the 30 players fight in a battle royale – the winner’s Dark Clan then becomes the new Immortals faction. This entire cycle of PvP can take about a month to three months on average.

There’s a fairly hefty amount of microtransactions in Diablo Immortal, like Eternal Orbs (used to purchase Crests and upgrade the Battle Pass) and Platinum (which can also be farmed in-game and is used for crafting Legendary gems and buying items in the Marketplace). Using Eternal Orbs, you can purchase Crests, Materials, Reforge Stones and also premium cosmetics (based on data-mining of the playtests, at least). As for the Battle Pass, each player can work through a free track or spend $5 on the Empowered Battle Pass features rewards like a Rank 10 Legendary Off-Hand, Crests (both Rare and Legendary), Materials and more. Whether this has been changed since the closed beta to be more rewarding remains to be seen. 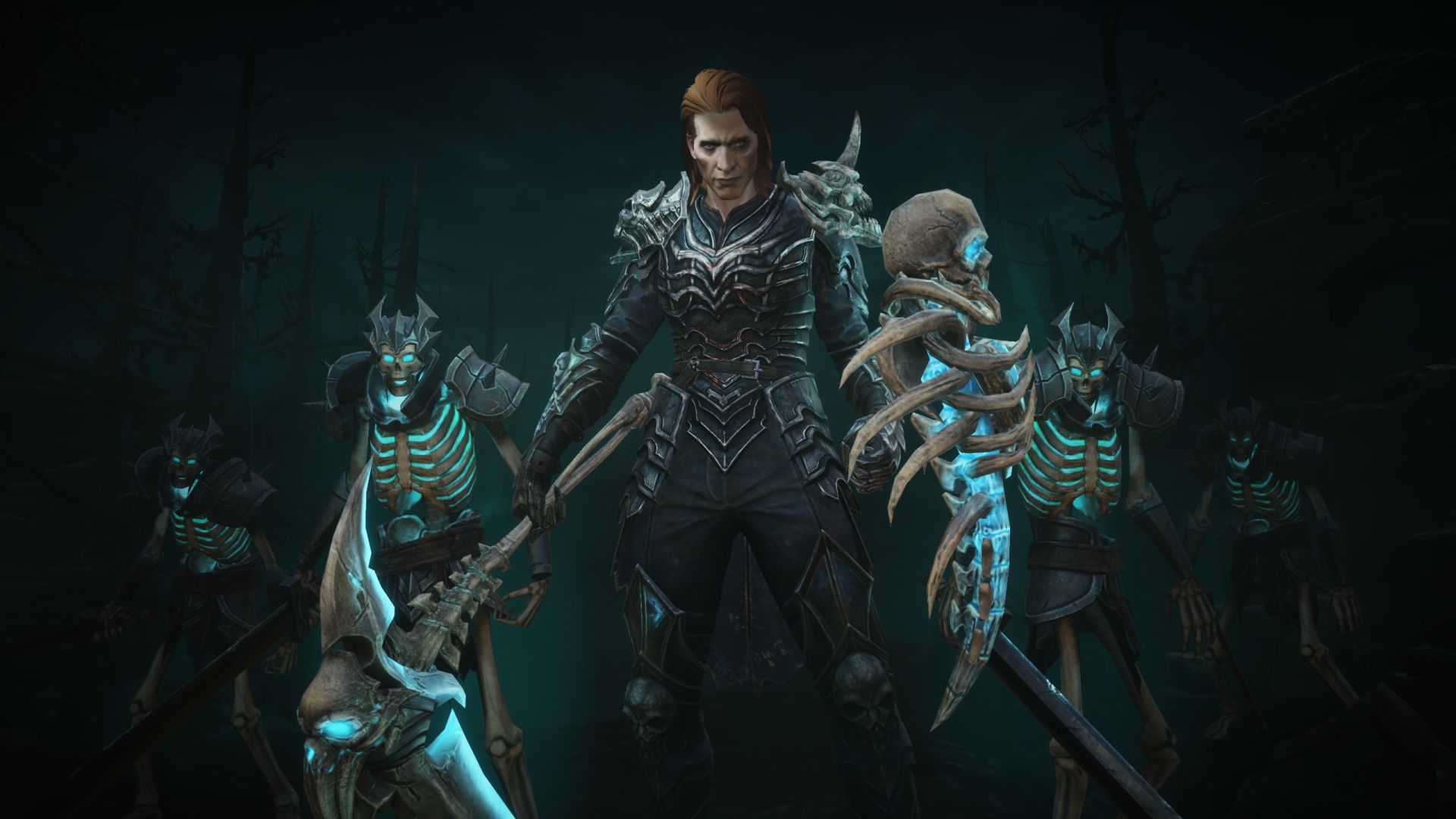 In both cases, you’ll be able to play the game at 1920×1080 resolution though graphical details – along with how much installation space is needed – have yet to be confirmed. Those on Android will need Android 5.0 or higher, a Snapdragon 660 or Exynos 9611 or higher, an Adreno 512 or Mali-G62 MP3 or higher and 2 GB of RAM. iOS users need an iPhone 6S and newer with iOS 11 or newer installed. 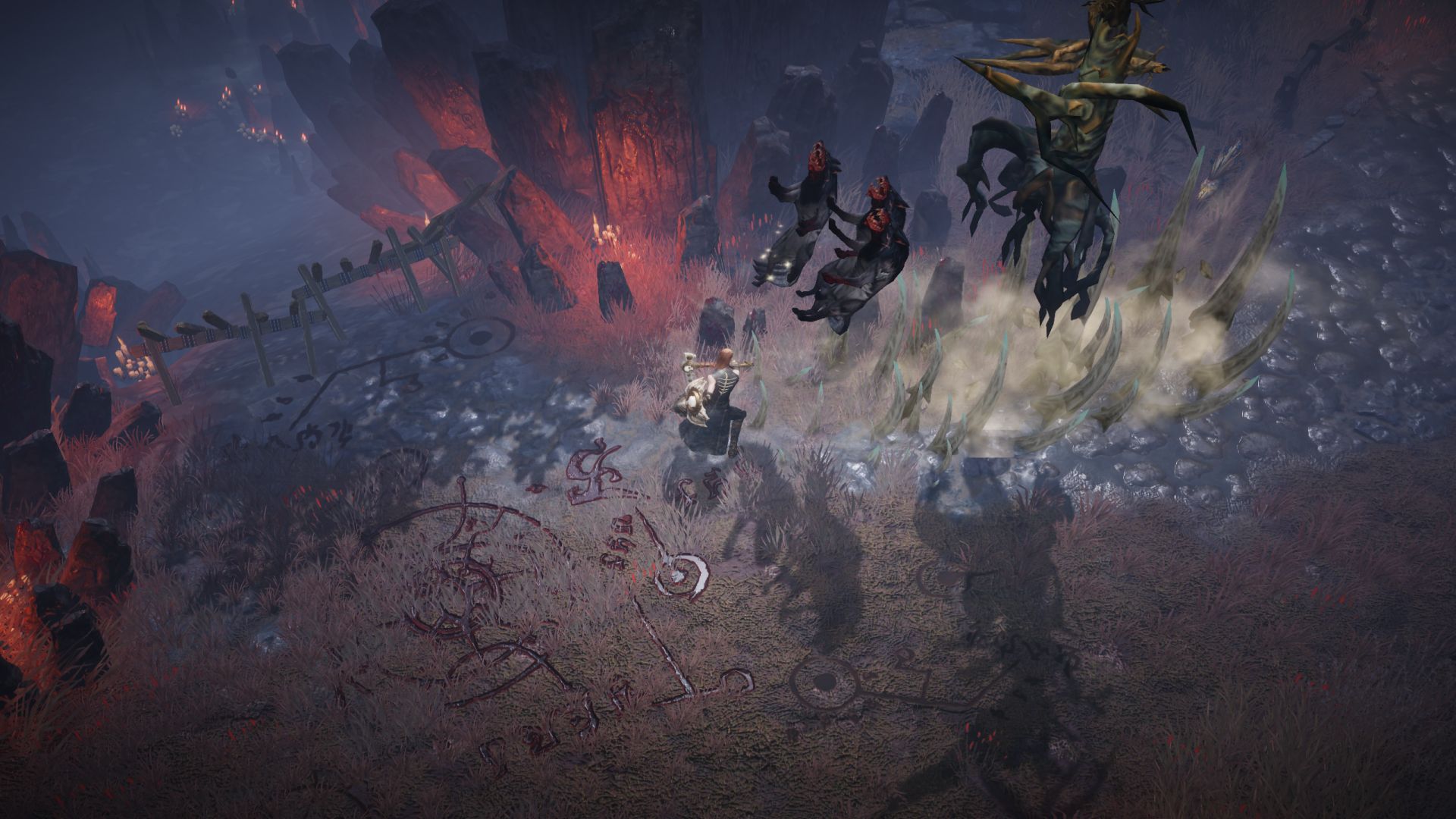 The Marketplace, hilariously enough, is the most straightforward part of the game. You can purchase Normal Gems, Legendary Gems, Runes and Skill Stones with Platinum, which can be earned in-game or purchased with real money. There’s even a wishlist that helps keep track of certain items you may want to purchase later.