For a game focused so much on rebelling against integration, the influences and genres pooled together in V1 Interactive’s Disintegration are interesting to note. It’s a first person shooter where gunning down targets is key but it’s also a strategy game. Directing units and taking up positions is important but so is managing unit cooldowns and staggering foes. Given the development studio was co-founded by Marcus Lehto, who co-created the Halo universe at Bungie, there’s plenty familiar about the open nature of encounters (not to mention the hub reminiscent of Destiny’s Tower). If you look past its blemishes, Disintegration‘s special brand of action can be enjoyable at times. That doesn’t change the fact that its various gameplay choices don’t remarkably gel together all the time.

"Despite how typical the story can be, the overall worldbuilding can be pleasant."

The story is set in the near future with the Earth ruined by natural disasters, economic downturns and the eventual collapse of society. To help cope with the sheer downfall of the planet, humanity invented “Integration”, the practice of transferring one’s mind into a robot body. The robots could survive the harsh conditions and even thrive with limited sources. Though meant to be temporary, it wasn’t long before the fanatical Reyonne decided that Integration was humanity’s next big evolutionary step. Thus it set about capturing humans, turning them into soldiers aka “red eyes” and generally being mean.

You play as Romer Shoal, an Integrated human held captive on the Reyonne’s Iron Cloud. After being set free by other Integrated, Romer and his new allies work together with various outlaws to stop the Reyonne (and perhaps get their human forms back). Each squadmate has a fairly defined character type – Cocqui is the light-hearted one, Seguin is the stern type, Agnes is warm but defiant, and Doyle is the bruiser. There’s also Wagoner, a mysterious old man that assists the rebellion and lends you a base and Gravcycle. And wouldn’t you know it but Romer happens to be quite the Gravcycle pilot.

You and your crew are sent on lengthy missions to scavenge for scrap, assist the outlaws or stop the Reyonne from destroying a dam (with challenges that can be acquired between each mission). Despite how typical the story can be, the overall worldbuilding can be pleasant. Your squadmates will talk about various happenings, the fate of humans who resisted Integration, the state of the world and even their own desires and ambitions. There’s some entertainment to be had but not every clever bit of banter lands or feels appropriate for each mission. The atmosphere of a ruined world, an almost desolate kind of beauty pervading the air is solid, if nothing else. 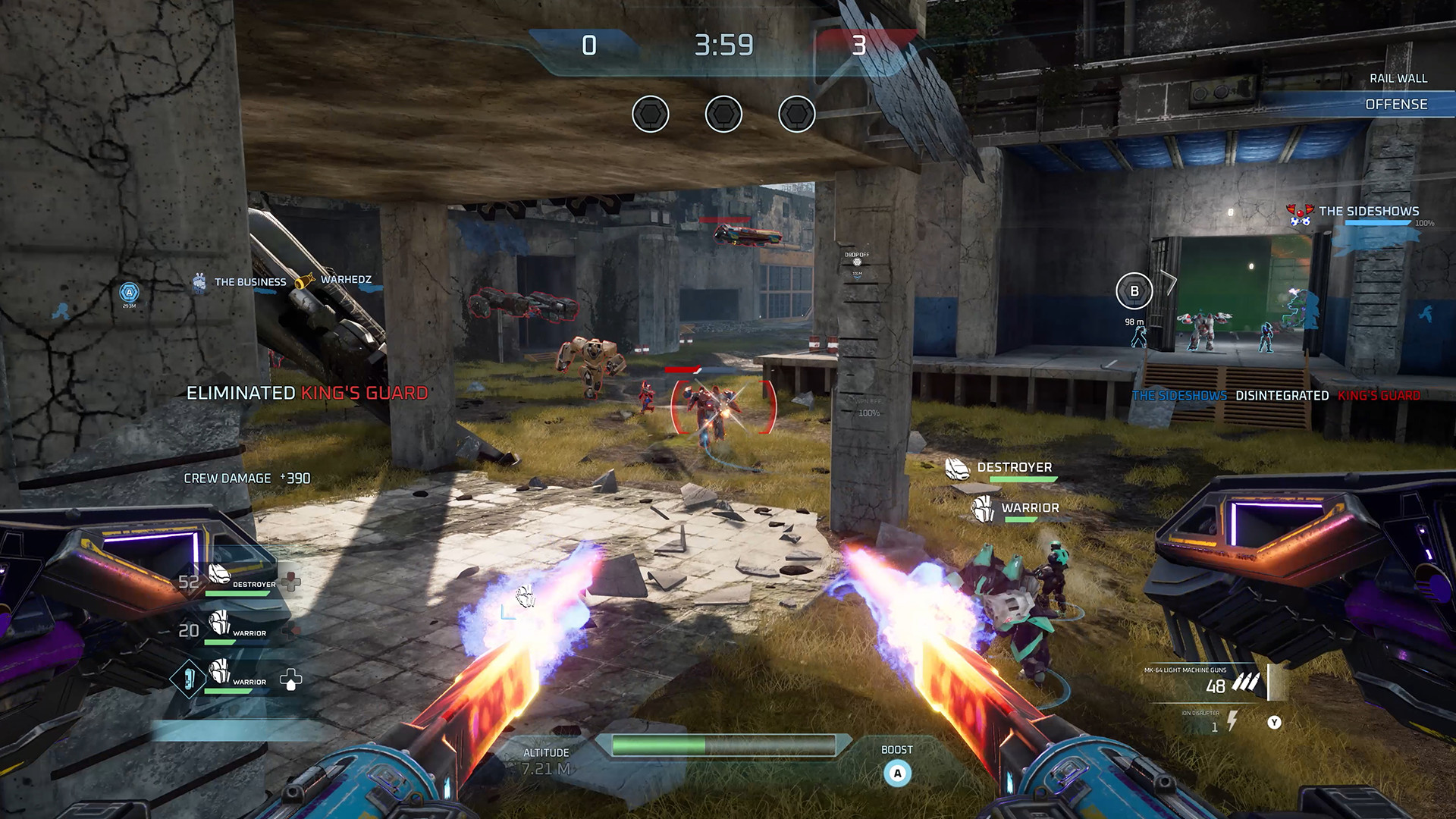 "Extensive cooldowns for some of the crazier abilities means you’ll be using concussive grenades to stagger enemies and then taking them down with gunfire more often than not."

As you embark on missions, you’ll be hovering over the battlefield, providing fire support and issuing commands. The controls in this sense can take some getting used to, especially when switching between healing and shooting, but they’re intuitive enough with time (at least on PC). Your crewmates have their own AI but will still require some direction when things get hectic. Which abilities to use, targets to focus and when to fall back are all up to you.

Each crewmate has their own unique class so soldiers like Agnes and Cocqui are good for stunning foes with their concussive grenades while Doyle can launch a destructive salvo of missiles. Combining abilities, like Seguin’s slowing field with Doyle’s mortar strike, can lead to devastating results. However, extensive cooldowns for some of the crazier abilities means you’ll be using concussive grenades to stagger enemies and then taking them down with gunfire more often than not.

This can become repetitive especially when every mission boils down to rushing to the next objective and taking down squads of foes again and again (with some waiting in a protective field, as is the cae in on mission). Enemies on the ground doing their best to avoid your flanks and reinforcements swarming from different directions keeps things tense especially when snipers and heavy Rhino units come into play. However, the AI for both allies and enemies can be a little uneven. On the one hand, your units will follow closely, take cover and execute commands with little hindrance. On the other, they’ll run outside healing fields to pursue enemies while damaged or ignore foes that are right up in their literal grills. 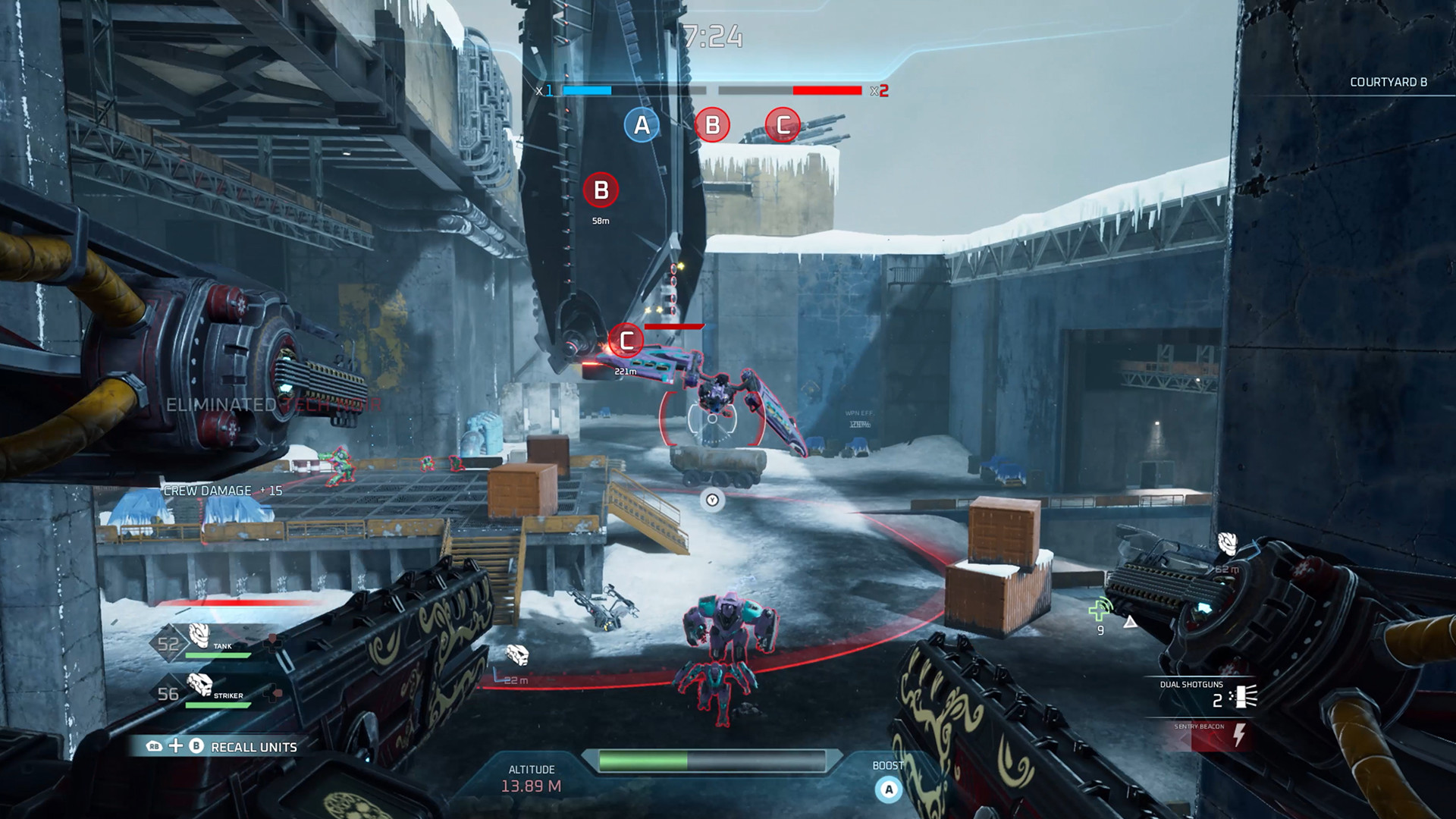 "Disintegration, in a nutshell, can be fun when chaos reigns and the orchestral score is kicked up a notch."

Spamming the indicator is key in some situations but your squad will often get caught by those annoying mines (which are ominpotent, I swear) and other hazards. It’s not a game-breaking occurrence so much as an annoyance that crops up again and again. At least upgrading them increases their damage and survivability. As for the enemy AI, for every intelligent move they make, there are the obligatory hiccups like charging into your backline without a care in the world.

Disintegration, in a nutshell, can be fun when chaos reigns and the orchestral score is kicked up a notch. It can be pretty dull when you realize that levels only really have one linear path despite their openness, with huge skirmishes only being tackled head-on. Its shooting is responsive, even if its time-to-kill in PvE reinforces the need to stagger enemies and focus fire (especially when enemy health and damage is bumped up at Maverick difficulty and beyond). The story isn’t incredible but it’s entertaining enough and gets the job done while acquainting you with the world and the appealing cast. The hub areas are nice but simplistic with very little to actually see as you run from one green speech bubble to the next.

Nothing really drags the experience down but nothing really stands out as amazing either. This is all the more apparent in multiplayer when two teams of five Crews battle it out. You’ll partake in three modes – Collector, Retrieval and Zone Control – with each player having their own Gravcycle and squadmates. The maps offer enough cover for Gravcycles and room for maneuverbility along with a decent amount of flanking routes and paths. The long time-to-kill is all the more reinforced here, with special weapons like the Warhead and Shotguns mixing things up. Regardless, engagements are meant to be more drawn out – your units fight on the ground, their abilities feeling somewhat superfluous. Sometimes, it can feel weird just hovering around and boosting every now and again when you take too much damage. 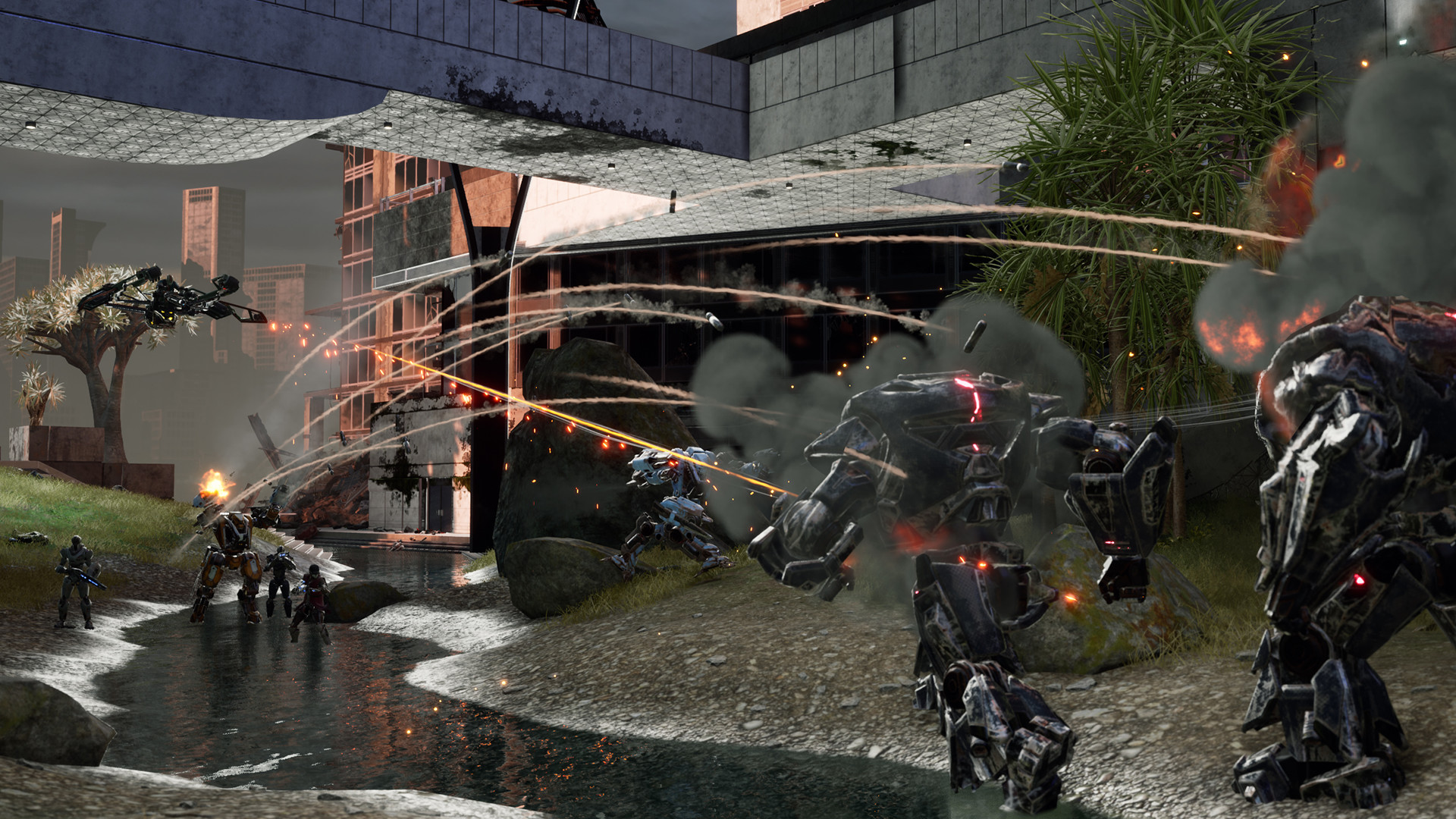 "All in all, despite all the strategy inherent, multiplayer amounts to some dumb arcade-like action at the end of the day."

Collector is your standard Kill Confirmed mode and the overall crew abilities don’t stand out much. By comparison, there’s more strategy involved in Zone Control since you can control choke points, lobbing Concussion Grenades and slow fields to gain an advantage. Fights are often determined by who gets the drop on who, whether your teammates are around to assist in kills or if you’re caught on the unlucky end of a Warhead. The skill floor in multiplayer is relatively low, allowing for easy entry but there’s not a whole lot to master.

It is fun to experiment with the different crews, each with their own tailor-made Gravcycles and compositions that cater to different play-styles. You can go full durability with The Militia or sacrifice that for speed with Neon Dreams. Each crew has their own assigned unit types as well – some like The Business will only offer two squadmates while others provide three. They even have their own challenges to complete and cosmetics to unlock.

All in all, despite all the strategy inherent, multiplayer amounts to some dumb arcade-like action at the end of the day. Though I didn’t spend too much time with it, PvP didn’t strike me as anything particularly noteworthy or having a long shelf-life. Whether new modes or quality of life changes can fix that remains to be seen.

"There just isn’t much to this tactical strategy-meets-sci-fi-FPS style of gameplay, leading to an enjoyable but quickly forgettable experience."

Even if Disintegration isn’t the most graphically intense title out there, it does have a nice aesthetic to it (even if its influences are almost too obvious, especially in the level design). Performance is similarly solid with no slowdown and only one or two crashes to speak of. Despite how much the signature Halo theme is evoked in the soundtrack, I still got a kick out of Disintegration‘s music.

At the end of the day, Disintegration feels like it could have done more. The gameplay isn’t mind-blowing but it’s fun enough that you can play through the campaign without many hang-ups. More polish for the AI, tighter pacing for the story and more varied mission objectives would definitely help its cause. But there just isn’t much to this tactical strategy-meets-sci-fi-FPS style of gameplay, leading to an enjoyable but quickly forgettable experience.

Mission design and gameplay can become repetitive after a point. Allied AI performs some questionable actions. Doesn't offer the best of strategy or shooter genres. Multiplayer is relative fluff with little depth.

Final Verdict:
GOOD
Disintegration is a straightforward experiment that offers an intriguing if derivative world to explore and characters to like. Its FPS/strategy mix of gameplay is inherently limited, especially in multiplayer, but the campaign still makes for an enjoyable romp.
A copy of this game was provided by Developer/Publisher/Distributor/PR Agency for review purposes. Click here to know more about our Reviews Policy.