Bioware releases some stats and tips for taking down the game's toughest enemies. 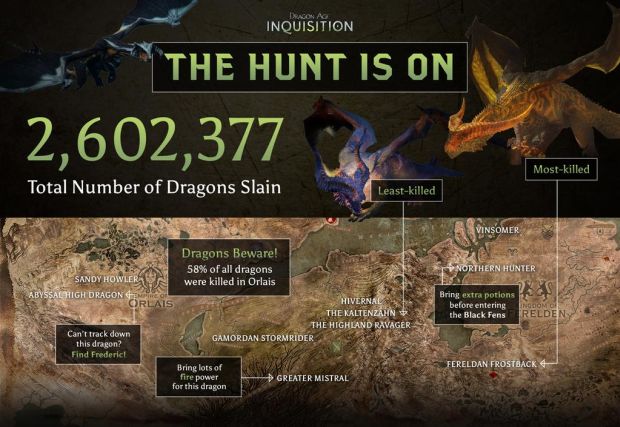 Bioware’s Dragon Age: Inquisition was without a doubt last year’s Game of the Year for many publications and websites (including GamingBolt). There was praise for nearly every single element but many were amazed at the sheer amount of content there was to play. This included the Dragons, the toughest additional bosses that players could hunt for various rewards.

Despite the challenge that Dragons presented though, players had no problem stepping up. Bioware’s Dragon Age: Inquisition Twitter reported that more than 2.6 million Dragons have been killed thus far. It also released a handy little graphic showcasing which areas had the most Dragon deaths and general tips for approaching battles. Unlike most battles in the game, you’ll need to plan against the Dragons and focus on elemental strategies for victory.

Have you played Dragon Age: Inquisition and if so, which particular Dragon encounter had you reeling? Let us know in the comments and stay tuned for more information on the game including upcoming DLC.