DriveClub is the epitome of weather simulation in video games. Find out more in our final verdict.

Evolution Studios’ DriveClub is a different game now compared to the one we had during the woeful launch back in October. The game, although visually stunning, was hampered by a broken online multiplayer and an under prepared server infrastructure. During the last few weeks, Evolution Studios have been hard at work, fixing the multiplayer component and adding more servers and upgrading them to get the game back to its original vision. It seems to be paying off with the latest set of fixes and patches, the game does play better than it did during launch.

Earlier last week, Evolution Studios released the much awaited weather patch for DriveClub and as we have noted multiple times earlier, it lifts an already impressive looking title to an all together different level. This is not some random patch that merely adds snow and rain in the game. Evolution Studios have implemented a proper physics system so that the snow and rain particles are simulated according to the laws of forces, acceleration and motion.

For example, in real life the rain will appear to be inclined at a certain angle when you are sitting in a moving car. The more the speed of the car, the inclination angle of rain further increases. If you have ever thought about it, rain actually does not drop straight to the ground, it’s sometimes blown away by the winds. Generally speaking, when rain is pouring down, it’s falling down with a certain vertical velocity and zero horizontal velocity. If the car is stationary or is moving very slowly, the rain will appear to fall down at zero angle.

But when the car speeds up, it will move with some horizontal velocity but the driver’s own horizontal velocity is zero so this negates the horizontal velocity of the rain. The difference results into the angular orientation of the rain when the car is moving fast. Due to this the rear of the car gets less battered by the rain than the front. DriveClub actually implements this simulation wherein the inclination angle will vary according to the speed of the car. This is simply phenomenal stuff and we were shocked to found out this in our tests. We understand that most of this is technical jargon for our readers so we have simplified this for you via a image which you can check out below. 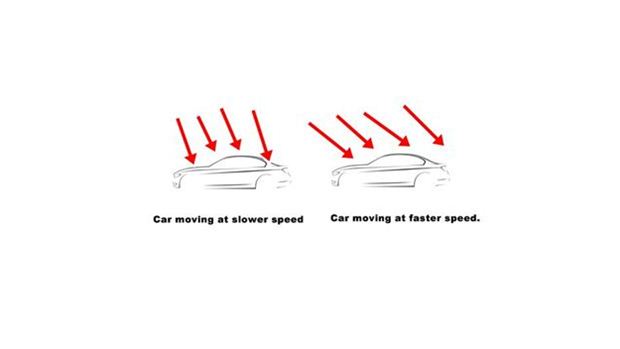 Another big addition to weather update are the snowstorms. In nature, snow behaves differently than rain since it drops in the form of crystalline water ice. As soon as it falls on a fast moving car it melts down resulting into chunks of water being thrown on the windshield. The simulation is different compared to rain wherein the droplets will vary according to the intensity of the rain storm and as such the car’s wipers will have a hard time dealing with snow compared to rain. This is again pretty much on the spot in DriveClub. However the best way to experience this effect is during night time wherein snow, a partly solid material, is lit up by the front lights of the car. This is another classic example of dynamic lighting that DriveClub employs.

Each particle is lit due to dynamic lighting.

Both rain and snow particles are dynamically affected by the velocity and the direction the car is moving. Depending on speed the car is travelling, rain drops will stray on the sides of the windshield and will automatically slide down should you reduce the speed. The droplets will slide left or right or remain stationary due to the pressure created between the wind and the windshield resulting into an accurate water particle simulation. Even the car windows depict this simulation. The water on the car windows will seep through in horizontal direction since they are in the same axis as the incoming window. This is the precise reason why you won’t see water falling down in a vertical fashion when you are sitting inside in a real moving car.

Evolution Studios have literally nailed the simulation of rain and snow in a video game. But how does the engine behave under dynamic conditions when you are going through a dry section of the track, say a tunnel? Fortunately, it behaves as expected. The windshield dries up in proportion to the number of times the wiper wipes the front shield and the windows lack any vertical water formation. And as soon as you are out in the wet, the simulation runs again. Absolutely phenomenal.

And as soon as you are out in the open, you can clearly see horizontal formation of water on the left due to rain.

It goes without saying that the car’s handling also changes depending on the weather condition. When snow is dropping, the tracks become slippery which means you will be sliding around a lot especially during corners. This happens due to the tires slipping as they try hard to get a grip on the road due to insufficient frictional force. In case of rain, when the car goes over a puddle, the frictional force between tires and roads is almost zero which results into a few bumps. We tried simulating both of these situations and the car slightly loses its frictional force. However, we are not sure how many players will actually notice this subtle effect.

We also saw several instance of global illumination and screen space reflection wherein the brake glow (which is due to the conversion of kinetic energy into heat) will reflect on the wet surface. The vehicle’s body will accordingly get wet with rain and each drop will have individual dynamic lighting depending on the multi layer shaded paint of the car’s body. All in all, DriveClub is one of the best looking racers we have ever played and might possibly have the best simulation of rain and snow in video games. It’s a visual splendour and a technical achievement of the year by Evolution Studios, although it’s a shame that the game launched with several issues and without the weather patch back in October.

Comparison with weather in Forza Horizon 2:

So how does the weather in DriveClub matches up with Forza Horizon 2? Honestly speaking, we haven’t seen anything like DriveClub till date. Don’t get us wrong, Forza Horizon 2 is a superb game with fantastic looking tracks and scenery but its lighting engine is simply not up to the level of DriveClub.

The rain simulation in Forza Horizon 2, although a step above other racing games, does not feature the dynamic accumulation and physics of rain droplets as seen in DriveClub. There is a decent level of dynamic lighting on rain particles,especially during night but the technique seems to be inferior to what we have in DriveClub. For someone who owns both the game, the differences might be jarring. Check out the video above for an in-depth comparison between the two.

Note: One of our readers Jonathan Blake partly contributed to this article by providing us with a comparison video for DriveClub and Forza Horizon 2.