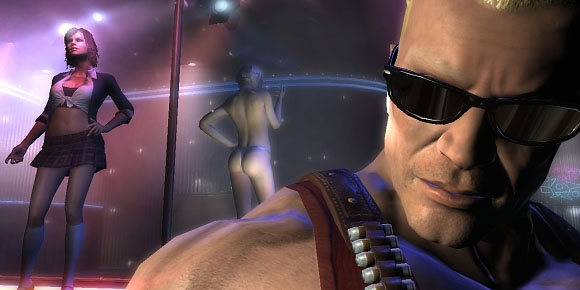 Duke Nukem truly is back with a bang- and Gearbox have gone all out to promote this game. Randy Pitchford, boss of Gearbox, has revealed that the game will be around 16-18 hours long.

Not just that- he says Duke’s affinity for anything sexually immature is still very much there. Pitchford, while talking to GameTrailers, said there’s a scene in game where Duke goes on a talk show and ends up doing something typically Duke Nukem. He also said that Nukem branded female vibrators will be making appearances… what the hell.

“There’s a glory hole,” Pitchford said. “Yeah. Fortunately, I’ll just leave it at that.” No, seriously. What. The. Hell.

On the length of the campaign, he said: “Average playtimes are more like 16, 18 hours. I know! It’s like three or four Call Of Duties, right? I’m not kidding… The game will speak for itself. I love it.”

Duke Nukem Forever, after its seventeen year long development cycle, will be releasing early May on the Xbox 360, PS3 and PC.