Back in the mid-90s a little known 2D platformer housed those searching for a little something outside the realms of Sonic and Mario. That game was Earthworm Jim, a title that had its own distinct flavour and brand of humour that helped set it apart from the rest of the crowd. Then after a successful sequel that built on the existing formula, we were subjected to the uninspired mediocrity of Earthworm Jim 3D; A game that seemed to just rip-off every other 3D platformer out there and fell flat because of it. This HD remake is the most recent release since then, but is a reboot enough to renew faith in the franchise?

Our hero comes in the form of a regular earthworm (called Jim surprisingly) who finds himself endowed with super strength and a handy plasma blaster when an experimental super suit falls on top of him from outer space. A loose plot follows with Jim trying to defeat the evil queen slug-for-a-butt in order to save the beautiful princess what’s her name. It could be more easily summarised as go to the right side of the screen. That’s really all you need to know as Earthworm Jim is not a game based on an intricate story and narrative. Instead Jim has always been renowned for its absurd and surreal sense of humour, that still holds up to this day. If you’ve never had the pleasure of launching the cow, then stop reading and buy it now as you’re a deprived individual who must make up for lost time. 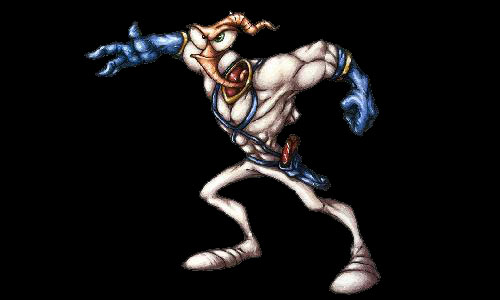 Back in the days when anthropomorphic protagonists were in

Everything in this game defies, and makes fun of, platform conventions of the time, from the enemies and weapons, to the levels themselves. Any game that warns that the first boss will vomit fish at you if you anger him is a success in my book. The level design and boss fights especially are quite varied as well, from a mission that involves defending an AI partner, (the infamous Peter Puppy for those in the know) to a boss fight that sees you beating a giant snot ball tied to a bungie jump chord. What’s even more impressive is the fact that the original was released so long ago. There are more ideas in one level of Jim than there are in most modern franchises, and all the zany ideas on display still go down well today.

It’s also nice to see some effort being made in extending the experience from the original game. Not only are there three brand new, never before seen bonus levels to unlock but also an entirely new co-op campaign that has been newly designed for this HD remake. All the new levels fit in well with the originals and the co-op levels, whilst not life changing, are well designed enough to ensure you and all your friends need to work together to get to the end in one piece. 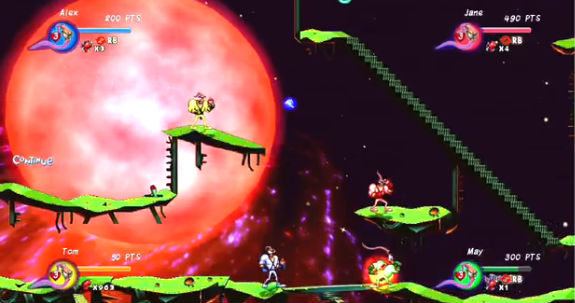 That’s a lot of Earthworm action crammed into one screen

Sadly not all is well in paradise as, for all the variety present in the levels, some of them can be just plain maze-like and unforgiving. There are a few sections that just seem a little too old-school and could’ve done with a little bit of modifying. I’m not saying that our modern generation of gamers need extra hand holding or anything like that, but these particular sections were ridiculous enough sixteen years ago, so it would’ve seemed sensible to give them a touch up for the re-hash.

On a similar level it is sad to see a lot of balancing issues re-occurring in the HD remake unchecked. You still can’t jump and shoot which, whilst a standard aspect of the original, felt a little strange when I’m so used to more recent 2D shooters. More frustrating are the hit boxes (particularly the hooks used to whip around the levels) which are, ironically, still a little hit and miss. Sadly it seems like there was almost too much respect for the source material during development, to the point where many of the original game’s imperfections still remain. Thankfully there is a good side to it all, as it’s still the same core gameplay that you know and love. There has been a slight tweak in terms of the difficulty level, with new easier modes of play available aside from the classic mode. This a welcome addition however, as the new points of entry grant the game an accessibility it never had in its original incarnation.

Another key change has been made to bring Earthworm Jim into the HD era, culminating in the new visuals on display. It may be little more than the smoothing out of a few textures here and there, but it brings the worlds and their inhabitants to life like never before. It all adds up to a visual experience that can only be described as Earthworm Jim the way it was meant to be seen. They might not be the most technically impressive graphics you’ll ever experience, but for a download only title it’s hard to find fault with them.

In terms of the audio on offer you’ll be both pleased and disappointed to find that not much has changed in the past sixteen years. On the plus side the SFX and vocal bites are just as you remember them. They’re classic Jim and will still bring a smile to your face. That, and you never do get tired of hearing him say “groovy.” On the other side of the coin we have the background music tracks. Whilst they retain a retro charm to them, I’ve always just found them a bit “meh.” It’s not enough to detract from the game, but it certainly pales in comparison to the rest of the package. 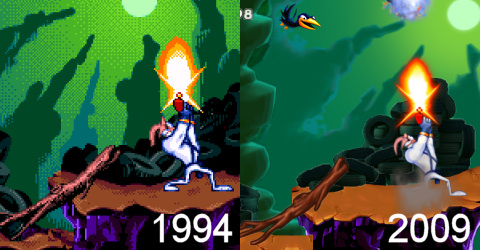 Not the greatest visuals, but it is clearly a cut above the original

Having forked out 800 Microsoft points, how much bang can you expect for your buck? Well the single player story is long enough on it’s own, and this time around you can actually save and continue from where you left off without the need for passwords. On top of that the new bonus levels, whilst short in comparison to the rest, mean that Earthworm HD is a game that just keeps on giving. Don’t even get me started on the co-op aspect of the package, as there are not only a myriad of levels to get through but also a choice of nightmares with both local and online play on offer. It’s a shame then that the achievements don’t quite keep the experience going in quite the same way. It’s not that they’re bad as such, but they just lack the humour of the game relying on collectables and ridiculously difficult timed completion affairs. For all the humour lacking in the achievements though, the avatar awards make up for this. I’m not usually into the whole avatar clothes thing, but a super suit for my avatar is almost worth the entry price of the game on its own.

What is their to say about Jim? It’s nice to have him back after all this time and in his comfort zone of the 2D realm. It’s a nice game just to have on your hard drive and there’s enjoyment enough here for both fans of the original and those who missed out on the Earthworm action the first time around. No matter how you look at it Earthworm Jim HD is a return to form and I can only hope that this will start a trend that culminates in Earthworm Jim 2 HD and maybe even an entirely new sequel! When all is said and done Earthworm Jim is not a perfect gaming experience, but you’d be foolish to miss out on it. I’d only recommend giving it a miss if you’re an easily frustrated gamer as, for better or worse, Earthworm Jim HD is as old-school as they come.

Classic 2D side-scrolling shooter action, A lot of additional content over the original, At 800 Microsoft points you get value for money, The humour has stood the test of time

No attempt to improve upon balancing issues present in the original, Still frustratingly difficult in some places, If you didn't “get it” the first time round this won't change your mind

Final Verdict:
SUPERB
Now, 16 years on, Earthworm Jim is back! It's still a blast, it's still hard as nails and it's still... Groovy!
A copy of this game was provided by Developer/Publisher/Distributor/PR Agency for review purposes. Click here to know more about our Reviews Policy.