Never trust a blind woman who gives you a pair of magical gloves! That important life lesson is learnt quite early on in the latest Kinect-based instalment of Fable: The Journey from Lionhead. Taking place some five decades after the events of Fable III, you take the reins of Gabriel, a young dweller who loses his tribe and has to embark on an epic journey so they can be reunited. Joining him on his quest is his horse, Seren, who you’ll spend the majority of your time steering through the many perilous and often beautiful vistas of Albion. 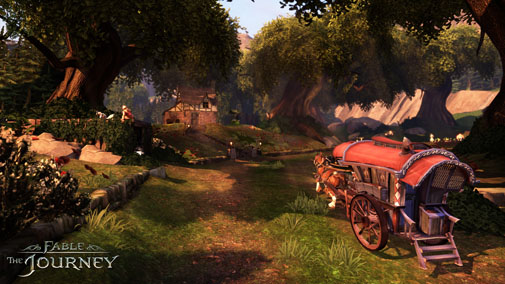 It’s Fable… but not as you know it. The Journey relies on Kinect

Besides your trusty steed, blind seer Theresa (voiced by Zoe Wannamaker) is also along for the ride – you’ll recognise her from the previous games. She needs your help to rid the world of a powerful and evil force… she’s also the one who tricks you into donning those aforementioned gloves – sorry, gauntlets – that allow you to wield all kinds of magical powers and abilities. Saddled with all this responsibility, Gabriel evolves from a nobody to saviour – and it’s all made possible thanks to the application of the Kinect motion controller.

Labelled as the title Kinect has been waiting for, The Journey is a decent effort and has enough to keep you entertained throughout its relatively short 10-hour playthrough. Using Kinect is fun and liberating, although there remain the age old flaws and limitations surrounding accuracy. On many occasions your attacks will go awry and your actions won’t get a response from the all-seeing motion sensor. It’s not that much of a problem, mind…. The game is very forgiving and affords you the luxury of the occasional misplaced spell.

For this outing the developers have departed from Fable’s traditional third-person perspective that gives you the freedom to roam wherever you fancy, instead opting for a first person on-rails slant. Cue collective groaning. On the face of it, this is a shame but in practice it works well and is necessary for the use of Kinect to stand even half a chance. 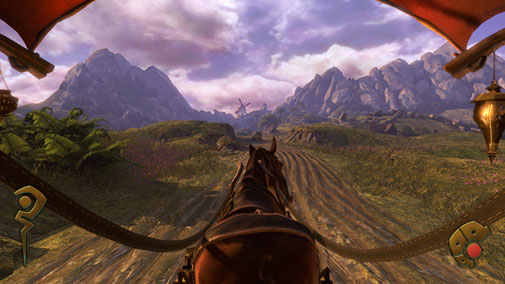 Fable: The Journey is a low impact game that requires you to be seated in front of your screen, proving that there’s more to Kinect than fitness games and working up a sweat. It’s certainly refreshing that there’s no need to jump about like a madman, plus there’s very little risk of injury, which is certainly welcome for less athletic gamers like myself. In fact, it’s much like Capcom’s Steel Battalion: Heavy Armor in that respect (see our recent review) although the controls have been better thought out and they actually work… most of the time.

You’re introduced to which gestures do what during a brief tutorial that initially outlines how you control your horse and caravan. Tugging slightly on the virtual reins and gently moving your hands back and forth determines direction, while a quick snap of the reins makes Seren up the pace a little, eventually going into a outright gallop if you require. When it works, it works well but riding along and steering occasionally is never going to win favour with hardcore gamers now, is it? Kinect’s failings are particularly acute during these stages with Seren as your actions often aren’t recognised. I often found myself steering her headlong into some inappropriately-place boulders or explosives in the road.

There’s very little to these horse and cart sections – of which there are many – besides ensuring that you don’t collide into walls and obstacles, and that you drive over as many of the collectible XP orbs as possible (these allow you to choose upgrades from a skill tree). You’re even advised to rest your hands on your lap during most of the sections so you don’t get too sore and tired – which highlights just how little there is to do. 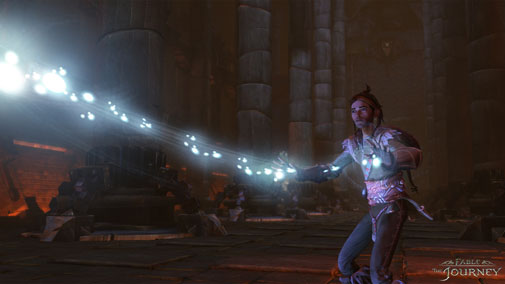 Firing off spells is the best bit by far

It’s fortunate then – and a blessed relief – that in no time, Theresa will encourage you to slip on those gauntlets and you’ll be able to cast spells and manipulate objects. It’s these fighting and puzzle sequences that make this game so much more appealing; from the moment you dismount and have a Hobbe or Balverine bounding towards you, you really feel in the thick of the action; the first person perspective works very well and it’s supremely satisfying waving your hand to shoot enemies with fireballs and bolts or interact with the environment. You even get to earn more spells and upgrade them as you progress. In fact, in my eyes, the entire mechanic proved even more enjoyable than the likes of Sorcery on the PS3 (reviewed here), which itself made such good use of the Move controller.

And you can even apply a little aftertouch to redirect your magic midflight – very handy for getting those bad guys when they’re hiding behind obstacles.

With your right hand dedicated to shooting, you use your left hand to push, pull and drag objects, or magically pick up a bad guy and toss him to one side. Placing your arm across your chest allows you to counter attacks too. Leaning left and right lets you strafe – which is perhaps the most energy intensive movement you’ll have to call into action while playing.

But it’s not only riding and magic that makes use of Kinect’s unique controls. Lionhead really seems to have a thing about getting you to bond with your animal companions and it does its level best to cultivate and nurture your relationship with your horse. Besides urging her to move faster through woodland and caverns, you’re able to stop on occasion and perform simple gestures to groom, feed and heal Seren. Sadly, no matter how many apples she scoffed from my hand or wounds I patched up, she never stirred as much emotion in me as my canine friends in previous games. I mean, it’s not like Seren liked chasing balls or sniffing out buried treasure for me. Pfft. Heart of stone perhaps, but for me the sequences sans Seren are far better. 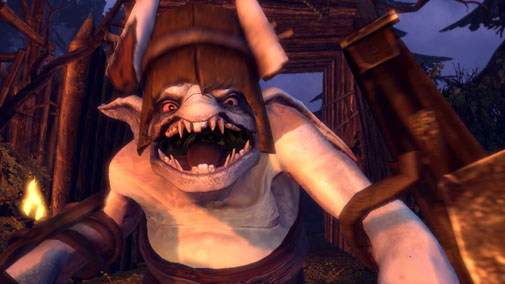 Some of the old Fable enemies make an appearance

So there you have it, the majority of the game is divided between riding segments and magic-oriented combat and that’s about it – although there are some side quests along the way, new characters to meet, great-looking environments to gawp at and the occasional boss fight.

Sure, The Journey may feature hollow men and magic, Theresa and our protagonist’s weird infatuation with his animal companion but this is quite unlike the other games in the series. The lush visuals are still there and the mystical land of Albion is lovingly recreated using the Unreal 3 engine but The Journey really does have an altogether different feel to it. The world is apparently three times larger than previous Fable games – it’s just a shame that you don’t really feel you get to explore it. As mentioned above, much of the action takes place along a set path with you looking at Seren’s rump.

The plot is typically strong and the multitude of cut scenes really helps to push the story along. There’s plenty of that trademark Fable humour too, which along with the visuals makes everything seem nice and familiar.

Ultimately, The Journey really does feel like an epic trip across the map – and in a good way. Its clearly not going to be for everyone but it’s a nice slant on a traditional format and more often than not, highlights how Kinect can be incorporated nicely into a game.

It's actually really enjoyable and makes good use of motion control. It looks like Fable and sounds like Fable... but is quite different from previous outings, which is a welcome change

Highlights Kinect's usual flaws. Sitting and shooting can get a little repetitive.Not that tough and the story doesn't last too long. Unlikely you'll come back for more once you've completed it

Final Verdict:
GOOD
Return to Albion and use Kinect throughout this epic journey to help Theresa and save the world. Standard Fable fare.
A copy of this game was provided by Developer/Publisher/Distributor/PR Agency for review purposes. Click here to know more about our Reviews Policy.