Something to make Fallout 4 better. 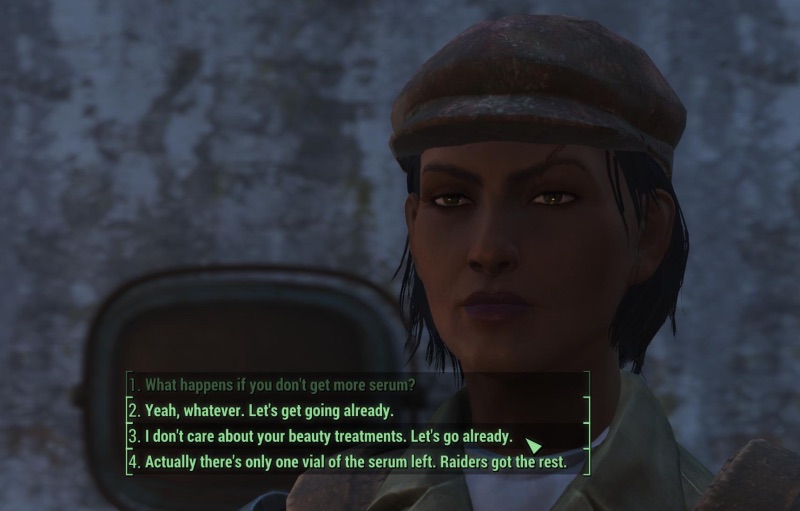 With Fallout 4, Bethesda really went overboard with trying to streamline the game and make it accessible for larger audiences- which in my opinion was unnecessary, given just how many copies Skyrim sold. But hey, they’re the developer, not me.

One of the biggest missteps by Bethesda was the new dialog system- in the older Bethesda games, their protagonist would effectively be silent, and you would choose full dialog in response to prompts on screen. It worked, and it allowed for full roleplaying, by letting players choose exactly what they would say in a given situation.

In Fallout 4, Bethesda replaced that with a dialog wheel. The dialog wheel always has four dialog options, one assigned to each face button; the options are always meant to be two or three word summaries, that effectively communicate very little (what the hell does ‘sarcastic’ mean? Is the character going to say something sarcastic? Will he just say the word sarcastic? What sarcastic thing will he say? Is it just a harmless, funny thing? Is it something that will offend the other person and affect your relationship with them?), often banal, usually redundant, and effectively just an abstraction.

This new mod fixes this problem. It’s called Cirosan and Shadwar’s “Full Dialogue Interface,” and it is currently the most popular Fallout 4 mod. I can see why- with a non asinine dialog system, Fallout 4 actually becomes a somewhat better game.

Hopefully something like this can make it over to the consoles once they start getting Fallout 4 mods.