Data miners might have found the name of the fourth DLC pack.

While the third installment of DLC for Fallout 4 has not yet landed, it appears there are some people who think they have cracked the code when it comes to what the fourth DLC is going to be called and what it might center around.

We know that Bethesda has announced these first three pieces of DLC ending with Far Harbor. The company has said there will indeed be more DLC as we get further into 2016 and a group of Redditors think they’ve managed to data mine what might be the next part of DLC.

While data mining the game’s files they found mention of something called Nuka World. It appears this might be some kind of Nuka Cola Themeworld though there isn’t a great deal of info about what this mention might be. It’s possible it’s just a place players can go in the next DLC, or it might be the central focus. We’ll have to wait and see when Bethesda is ready to announce. In the meantime check out the photo below of the data that was that dug up. 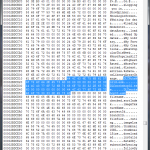