Performance issues severely impact the experience on PS4 Pro and Xbox One X.

Back during E3, it was confirmed that The Elder Scrolls 6 and Starfield, two of the biggest upcoming games from Bethesda Game Studios will be using the good, old Creation Engine. I swallowed that piece of information with a lot suspicion given how that engine has been prone to bugs and performance issues in the studio’s last many games. However, there was a sense of intrigue as well. Maybe, just maybe, Bethesda Game Studios will be improving and updating the engine dramatically for Fallout 76. However, after going hands on with both the PS4 Pro and Xbox One X, both decently powerful consoles, the state of the Creation engine is more or less the same.

Now, I totally understand the fact that Fallout 76 is four times bigger than Fallout 4, and this must have surely been a factor while optimizing the game code for consoles. But the compromise that players have received against the massive world size is simply not acceptable. First off all, the performance across both the PS4 Pro and Xbox One X targets 30fps, just like Fallout 4. However, rarely did we come across a lengthy stretch of gameplay that the engine managed to hold to that target. The frame rate drops on the PS4 Pro are absolutely atrocious. Frequent slowdowns and lag really hurt our overall experience with Fallout 76. The Xbox One X does a bit better in this regard but it to suffers from performance drops, although they are not as harsh as it’s on Sony’s console. Overall, on the performance side of things, it’s a rather disappointing state of affairs. A game in which enemy can attack you rather quickly, performance drop is crucial whenever combat is going on. We are not happy with either console’s performance but we can find some solace in the fact that Xbox One X manages to perform much better than the PS4 Pro.

Next up is the pop-in issue. Now, let me get this out of the way. Pop-ins in open world games isn’t really a major issue and for a game as big as Fallout 76, I could try to be a bit lenient towards them. Unfortunately, the pop-in issue is an extremely severe case in Fallout 76…you can actually see a nearby lake load up as you traverse through a forest. Foliage pop-in was almost a consistent occurrence in our limited playthrough of the game. This issue hits the PS4 Pro hardest to the point where even road surface markings have pop-ins! I have played through a lot of open world games in recent years and no engine has handled pop-in issues this badly as the Creation engine. It can be an immersion breaker for players and am hopeful Bethesda will fix this in a future patch.

Next up are the loading times. Almost every major open world game these days don’t make the player to wait as the game loads to render an indoor building or environment. Such practice in game design is more or less extinct. However, Fallout 76 is still using this, adding load screens before you enter an indoor location, thereby totally distracting the player from the experience. It would have been a different matter if this loading screen lasted for a few seconds but they last for several seconds, which simply put is unacceptable.

Animations haven’t really been the strongest suite of the Creation engine and to be honest I wasn’t really expecting much out of Fallout 76 in this regard. Animations for the most part are clunky and glitchy. Some of them have now flow and feel like they are missing frames. I am not sure how much of these animation issues were related to a possible server issue, but regardless, don’t expect any major improvements in the animations departments. In an era where we have open world games like Red Dead Redemption 2 doing wonders with Xbox One X and PS4 Pro, it’s almost sad to see that a major studio struggle with its technology for what is potentially a very good game.

Now, don’t get me wrong. There are certainly several aspects that the developers have improved in the engine. The world is obviously much bigger, there are more places to interact and the overall art style is a big improvement from Fallout 76. Atmospheric lighting is handled really well and it’s a sight to behold when the player character traverses through a lush area. The overall color palette selection is also much better than Fallout 4, making the colors really pop out when the game manages to run at 30fps. There is an exceptional variety in enemy design and there is definitely an improvement in enemy AI compared to Fallout 4. They are much smarter and aggressive encouraging the player to use strategic elements instead of mindlessly shooting. So, yes, there are definitely some positives for the Creation engine but the issues mentioned previously are simply too big to ignore at this point. Given that this Fallout 76 is a service-based game, we are more than hopeful that those problems will be ironed out. 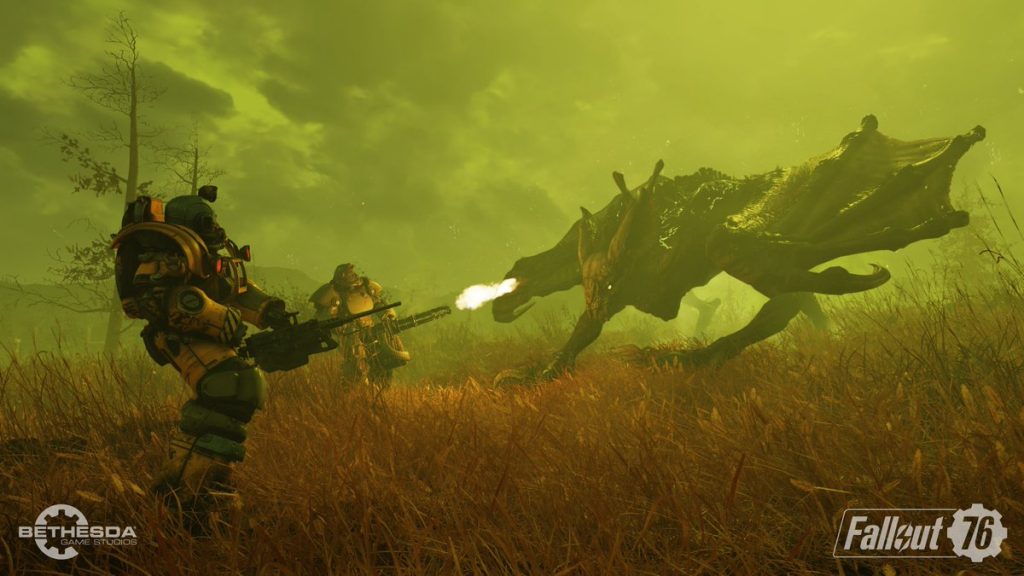 Now jumping to everyone’s favorite section of this feature, the console comparisons and differences. First, there is an obvious difference in resolution with the Xbox One X taking the lead over the PS4 Pro with better image quality. Second, we have already established that the PS4 Pro suffers from severe frame rate drops and pop-in issues compared to the Xbox One X, which by the way also suffers from the same issues but to a lesser degree. But what else is there? The other difference is the way the engine handles ambient occlusion for both consoles. Both consoles use a different solution, however for some reason the solution looks a bit inferior on the PS4 Pro. Furthermore, the Xbox One X also takes the lead with better draw distance, shadow quality and reflection, although I must add that the differences in these departments are subtle but there is are differences nonetheless.

I will be honest, I was pretty skeptical of Fallout 76’s gameplay. However, Bethesda has truly surprised me in this regard. But from a technical perspective it’s a disappointment, at least on consoles. Granted, the Xbox One X is clearly the better console platform, it too suffers from many issues that it’s hard for me to recommend either version due to their inconsistent performance.

There are certainly some big improvements in post processing effects and the way the Creation engine handles its lighting tech but I strongly believe that Bethesda Game Studios should re-evaluate their engine’s framework. I won’t exaggerate my feelings by stating that they should scrap their framework all together, but some portions of that engine really need to be coded from the ground up so that at the very least the true vision of The Elder Scrolls 6 and Starfield can be realized.

As they say, War…War never changes…