Fez is a delightful game. It’s a culmination of five years of hard work especially after its creator Phil Fish getting seemingly taunted of being never able to ship a game. He did it and in style. With all the controversy surrounding him after his recent outpouring against the Japanese gaming industry, he has ended up being the victor in the end. As they say – actions speak louder than words, couldn’t be any truer.

I wasn’t prepared for such endless barrage of creativity oozing out from this game, and no doubt, you can compare it with Nintendo’s best. Am I going too far with the praise even when I haven’t even begun describing what this game is about? The answer is, yes.

The game, while, can be termed as generic when it comes to the visuals, excels in level design and I feel no shame in saying that it can rival the best Mario game when it comes to sheer amount of absurd things thrown at you.

Fez will challenge your wits to the limits, and you will find yourself stuck often requiring you to switch every cell in your brain to get through the interconnected maze like level design, each unique and pleasant to look at. So, then, what separates Fez from the other retro pixel styled games out there. Is it just the creativity of its creator? Surely, that can’t be enough? 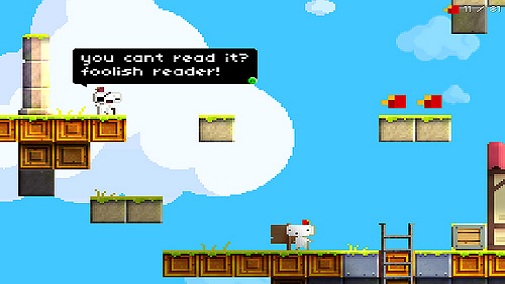 There are an incredible amount of collectibles available in the game – some hidden in clever locations, others hidden in plain sight, each of them are necessary and interwoven in the game seamlessly, and do not feel like an optional collect-a-thon.

The game revolves under a character named Gomez, who is a central figure in this mysterious world that you get to will explore. The rules are simple – navigate, collect, and utilize. It applies to many games out there, sure, but in Fez, it is meaningful. The game was in development for a long while now, and the level design shows you why it was. It is incredible. Simply incredible. 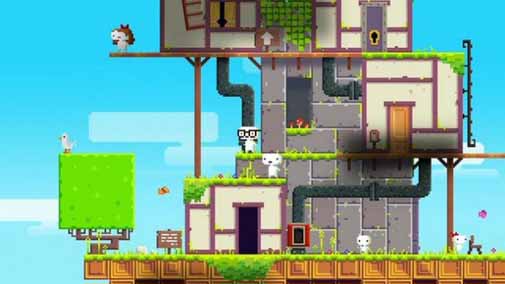 The world shifts as you press the LT or RT button, allowing Gomez to get a different perspective of the environment he is in, and also allowing him to reach places that he couldn’t reach before. The screen turns in four directions, which is then used to solve the clever platforming puzzles that Gomez will encounter.

There is a good isometric map which is not accessible to newcomers, but is not that convoluted either. It shows you the entire areas you’ve been to, and also tells you if there are any collectibles hidden. Initially it is okay to be overwhelmed by the level design. I sort of feel it is impossible to play Fez for more than 2 hours in a single sitting – it really drains you mentally, as there is no story, no combat and is pretty bland, but that’s the good thing about it. 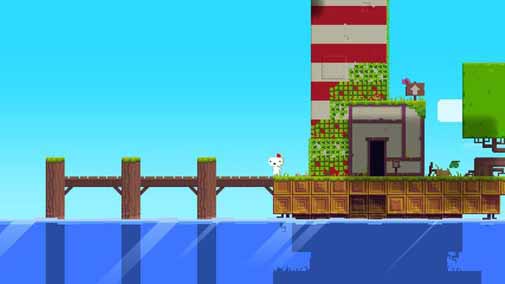 It stands out in spite of being so simple and is filled with ingenious ideas which you will come to realize as you keep playing the game. You have to collect 8 cubes to create a large cube and there are a total of 32 cubes you have to find to see the ending. You can find upto 64 but I have no idea what that does.

The game is filled with secrets and a playthrough for a second time is recommend, as you notice a lot of things that whizzed past you in your first playthrough.

I think that’s the hallmark of a great game. I never expected Fez to turn out this way, and by this way I mean, the best way obviously. Gomez can die in the game but you are teleported to the last known location you were before your death, and while I believe it eliminates any sort of difficulty from the game when it comes to sheer platforming, which is more akin to Mario than something like Super Meat Boy. 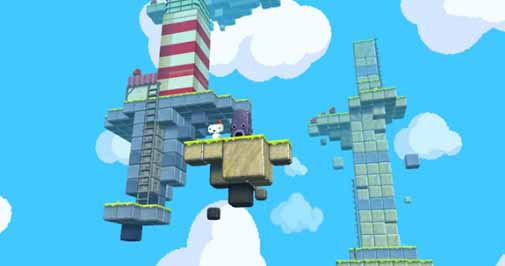 The game isn’t for everybody, though. I can say this confidently. Some people will be put off by the visual style and the puzzles, but it could also prove to be an exhilarating experience to many. Fez is a game with sheer amount of ingenious ideas and the execution is pretty solid as well.

There may be a few technical issues with regards to the frame rate, which, considering the time spent in the oven is disappointing, but definitely not game breaking. Xbox 360 owners have no reason not to buy Fez, especially if they love puzzle platformers. This is as close as they can get to a top class Mario game on the system, and that is a big compliment in itself.

Platforming mechanics can be a bit iffy. Some technical issues.

Final Verdict:
EDITOR’S CHOICE
Xbox 360 owners have no reason not to buy Fez, especially if they love puzzle platformers. This is as close as they can get to a top class Mario game on the system, and that is a big compliment in itself.
A copy of this game was provided by Developer/Publisher/Distributor/PR Agency for review purposes. Click here to know more about our Reviews Policy.