Succeeding in Ultimate Team often means spending a lot of Coins. Here are a few tips for earning Coins at a good rate without much hassle. 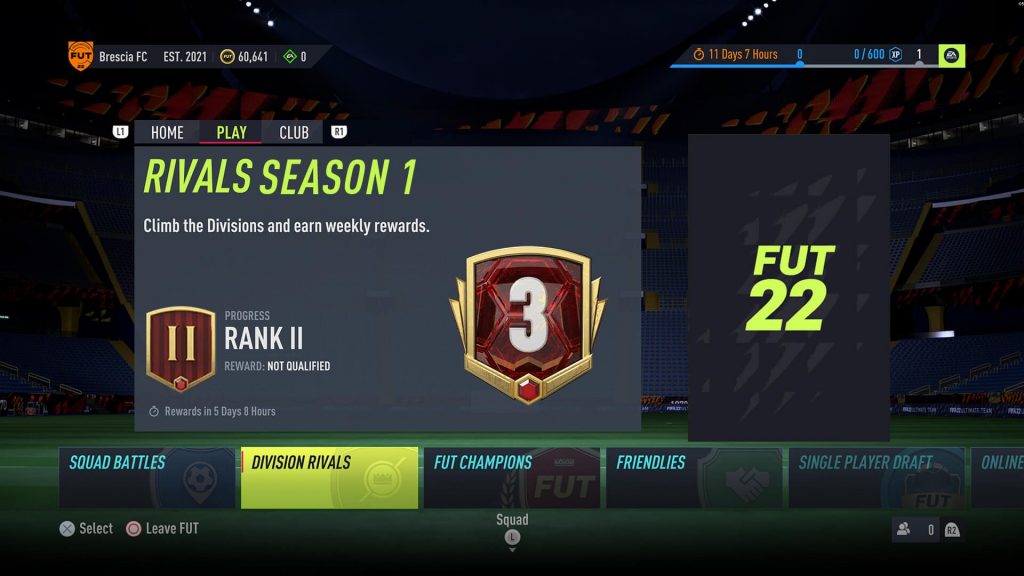 FUT Coins are an integral part of the Ultimate Team experience in any FIFA game. In FIFA 22, fans can utilize many of the same tactics are previous entries to earn Coins. Unlike FIFA Points, Coins can only be earned in-game and a small amount is doled out each match (with additional amounts dependent on your performance). How do you earn more though?

Keep an eye out for Coin Boosts earned via Season Progress and Milestones – these will increase the amount of Coins earned from activities for a short period. You’ll also want to indulge in Squad Battles and Division Rivals. Think of these as your weekly rituals. You play Squad Battles over the seven-day period and any matches played will provide points. Earn enough points and different reward tiers become available, including Coins and Packs. Prioritize the Packs which are tradeable since any players you don’t want can be flipped in the market.

Speaking of which, make sure to check out the Bronze Premium Packs whenever possible. They cost 750 Coins and can provide some decent players that can be sold on the market for thousands, providing a good return on investment. And while kits and badges don’t offer much, they can be sold for a decent amount as well.

Next are Squad Building Challenges which involve arranging different players into a team based on the requirements (like having certain nationalities grouped together). Hybrid Leagues and Hybrid Nations Squad Building Challenges are especially great since they each award a Rare Mega Pack on completion. Along with receiving some great Cards, you can also flips these on the Market for Coins. Just make sure that you’re keep track of the most desirable players – if a Squad Building Challenge for the week features one such players, then it’s overall value in the Market will go down. Hang on to those whenever possible and sell them at peak hours or whenever their value goes up again.

Trading on the Market is perhaps the most reliable way to earn Coins. While selling consumable cards, either from your inventory or by flipping them, provides good steady income. But you’ll also want to flip Icons, Team of the Week and Ones to Watch Cards since they can net some excellent profit. The key is to purchase them before FUT Champs on the weekend and then sell them when the requirements come out. You’ll also want to pick up Cards with a high OVR rating that are  off-meta. They’ll be cheap and once a new Squad Building Challenge goes live, you can sell them when prices go up.

Keep an eye on Transfer Market Auctions as well since you could pick up some very valuable Cards for cheap and then flip them for profit. Try to find players with a Chemistry Consumable attached since this will also save Coins. Thursday evening to Friday morning (depending on your timezone) are usually peak hours for selling Cards so keep that in mind.

Make sure not to waste your Coins on Card Packs. You’ll get enough of them by just playing the game and completing objectives. The Gold Packs are especially useless since there’s a very low chance of making a profit versus their cost (7500 Coins for the Premium Gold Packs). FIFA Points can be used to buy Card Packs but those cost real money – ultimately, it’s up to the player’s discretion in this regard.

FIFA 22 is currently available for Xbox One, Xbox Series X/S, PS4, PS5, PC and Google Stadia with the Legacy Edition out on Nintendo Switch. Check out our review here for more details.