Better things to fantasize about.

E very genre has a lineage that it evolved from. The most obscure indy platformer could never have existed without it’s primordial equivalent in Super Mario Bros, and hack n’ slash titles like Devil May Cry can be traced directly back to the likes of Battletoads. Of course, the most grandiose of Role Playing Games have their ancestry in the Final Fantasy series. The series didn’t have the greatest track record for localization back in the day, leaving american players with some confusing numbering, especially as the older titles made their way across the pacific. The Final Fantasy 3 under discussion today isn’t the fan favourite Super Nintendo title properly known as Final Fantasy 6, rather a port of the Nintendo DS title, which in itself brought the Famicom original across the pond and up to date visually with the time. The time being the operative word there.

Final Fantasy 3 drops players right into the action, without the faffing that the newer titles get railed for. A brief text introduction for main character Lunith later, and you’re left in a cave to figure out everything from the controls to the battle system. Depending on how spoiled you are by modern conventions, this will either be incredibly refreshing to not have your hand held for a tiptoe through tutorial tulips or irritatingly off-putting as the most basic of controls are left to be figured out. Lunith stumbles across a large crystal at the end of this cave, which unashamedly beats him with the trope stick and announces that he and three others are destined to save the world from darkness.

Lunith then shortly wakes up outside, and within an hour of gameplay, meets up with the conveniently destined children to join his quest. While a game can’t exactly be taken out of it’s time, in this day and age the story here just sounds so worn out that an onlooker might think the satire is going to rear it’s head at any moment, yet it doesn’t. How straight the game plays this old tale in and of itself makes it hard to maintain interest in the plot or empathy with the characters. 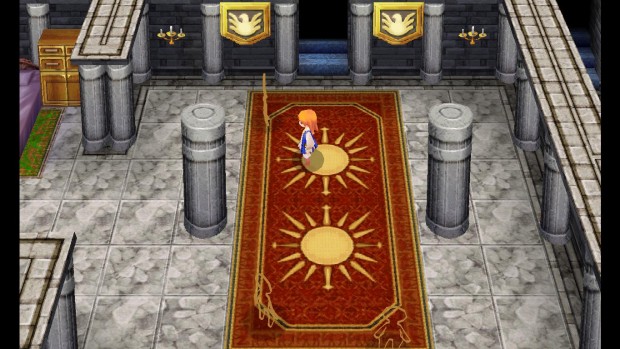 " Pacing is a problem throughout, as text boxes scroll at a snail pace at the highest setting and the simple act of moving around is rarely fast enough. "

The box standard story is complemented by an incredibly rudimentary battle system that unfortunately relies rather heavily on luck to prevail. Turn order is almost random, with nothing to visibly determine attack order besides the roll of a die. After cycling through your party and deciding between basic attacks, magic, defence, items or running away, you have to sit and watch the plodding pace of the characters beating each other with formally mentioned moves. Pacing is a problem throughout, as text boxes scroll at a snail pace at the highest setting and the simple act of moving around is rarely fast enough. This is only exacerbated by the erratic encounter rate, which will either trigger far to often, or wait just long enough for you to make you think you’ll get out of the area unmolested. An issue that can be paralleled in Pokemon, but without the benefit of repel.

Final Fantasy 3 introduced the “Job system” at the time, and is the only semblance of party customization in the game. you’ll earn different classes through the story, and can reclass  at any time. The classes more or less do what you expect, and change the abilities and possible equipment of the party members. If this sounds unenthusiastic, it’s because it’s yet another part of the package that’s hard to get excited about when so many games have done it better. The job system remains rather basic and non-engaging, especially when entries that the americas saw first did it far better. 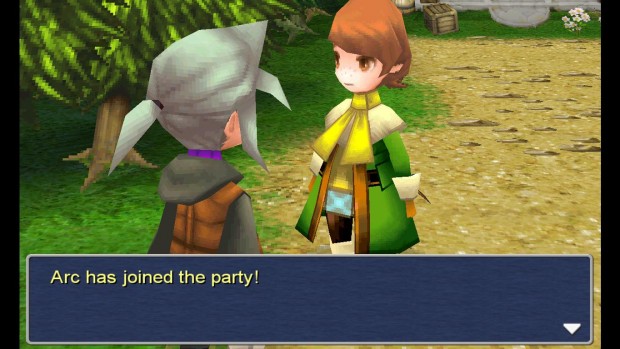 " This inability to save is greatly cumbersome, demanding hours of replayed dungeon crawling should you end up falling in battle, or simply want to maintain your spoils from the first trek through. "

Stats are minimal and the level curve is entirely unbalanced, necessitating annoying grind sessions to survive. Basic items that many other RPGs of the time offered, such as the life restoring phoenix down, are at a premium and the scarcity almost necessitates reloading or death from fighting at a half strength party. Reloading is itself a problem thanks to the antiquated save system, which demands players be on a world map before saving a permanent file. This inability to save is greatly cumbersome, demanding hours of replayed dungeon crawling should you end up falling in battle, or simply want to maintain your spoils from the first trek through.

Visually, the game looks terrible on the PC. Graphics are directly ported from the Nintendo DS, and being blown up to even a laptop display turns the semi-chibi design of the characters into blocky, pixelated eyesores. backdrops look like paper cutouts, and unfortunately not in a charming way. Enemy design has suffered from even less care than the player and NPC characters. Music also comes off as underproduced since it was intended for the DS’s tiny speakers. Overall, the presentation simply comes off as what it is. Lazy. 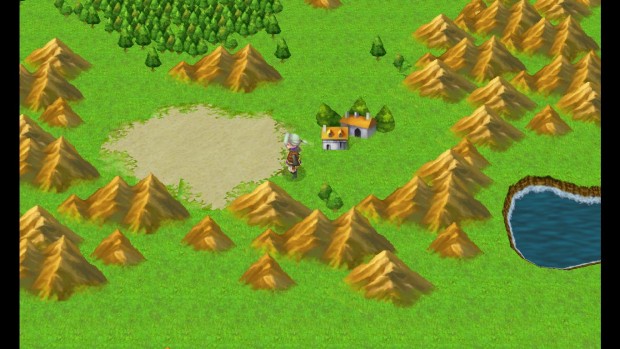 " Square Enix went for a quick buck with this port and it clearly shows, making this hard to recommend to anybody but the most dedicated "

Final Fantasy 3 is not a journey one should take lightly. The by the numbers story and cookie cutter characters leave nothing to resonate with, the basic battle system is too heavily reliant on luck and the generally antiquated mechanics do nothing to ease in new players, nor are they convenient for vetrans. Square Enix went for a quick buck with this port and it clearly shows, making this hard to recommend to anybody but the most dedicated, and at sixteen dollars, it’s not getting points for being a historical piece. Let this world fall into darkness, there are far more worthy lands to be saved.

Final Fantasy 3 functions exactly as it wants to function. Nothing here is strictly broken, just too outdated to be widely enjoyed.

Costs way too much for what is ultimately worth little beyond historical curiosity. Even once you get to grips with the basic battle system, item scarcity and the save system make the game a continual struggle. Presentation is not up to what should be reasonably expected from a PC game, lazily copying over the DS assets. Though it was at the time it created them, the trope filled, paint by numbers story is simply boring in 2014.

Final Verdict:
BAD
Final Fantasy 3 is not the ultimate fantasy by any means. There are far better entry points to the series and far more mechanically enjoyable titles for series faithful to return to.
A copy of this game was provided by Developer/Publisher/Distributor/PR Agency for review purposes. Click here to know more about our Reviews Policy.